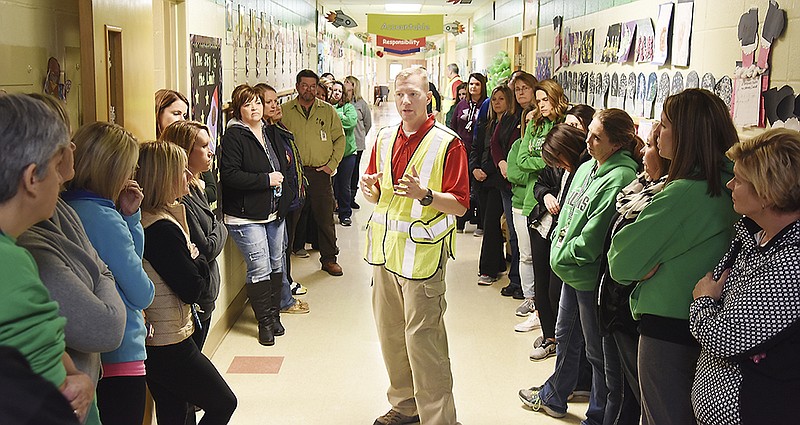 Bret Brooks of Gray Ram Tactical, LLC, in safety vest, goes over several points after an intruder training presentation to teachers Wednesday at each of the schools in the Blair Oaks district.

The worst part of a school shooting might almost be the silence that's as deafening as gunshots.

The first shots ring out, spent shell casings hit the floor and the smell of burnt gunpowder permeates a hallway as the faint gray particulate gunsmoke floats through the air like the snow flurries outside. People scatter, run to the nearest open classroom, doors close and lock, and then fearful silence replaces the shattered normalcy of the usual hallway chatter.

Inside classrooms, the deathly silence is interrupted by frantic begging and pounding at the door as a couple students try to get in to escape, jiggle the handle and keep screaming for help. More very close gunshots immediately follow and then the human voices and hallway fall silent.

The loudest sound in one's mind becomes a racing heartbeat. Terror clouds the senses, even interfering with fine motor skills.

"The scariest moment is always just before you start," an anonymously-quoted motivational sticker coincidentally posted on a classroom window read - capturing the anticipation of the next bang or pounding at the door was almost worse than the bangs themselves.

The only thing not real about this scenario that played out at each of the three schools of the Blair Oaks R-2 district Wednesday was the shots fired - they were blanks, just sound and smoke without bullets.

This was "near miss" active shooter training, as Bret Brooks described it.

Brooks works for Gray Ram Tactical, a Higginsville-based training and consulting firm that carried out the active shooter training. His wife, Dawn, founded, owns and is CEO of the corporation. It got even more personal Wednesday, though; the couple's children attend Blair Oaks. Their son, Weston, and daughter, Lauren, were the voices in the hall - Lauren's first time playing the part, during which she called at least one individual teacher of hers out by name to ask for help.

Wednesday wasn't the first time Blair Oaks has had active shooter training, but "today's was maybe the most elevated" in terms of stress, Superintendent Jim Jones said, adding it's important to try to have staff experience scenarios as close to the real thing as possible.

The risk of a shooter attacking Blair Oaks' schools or any particular school is low, but the consequences could be catastrophic. Brett said teachers and staff must prepare for the possibility; state law mandates it.

His philosophy is not to wait for an event to happen before making a decision about how to deal with it. He told Blair Oaks' teachers and staff to ask "what if" questions and be able to answer them. "That is how you keep yourself prepared."

"Have the proper mindset to know, to believe you can and will survive," he said.

"You are not expected to be a police officer," he assured teachers, but added they are responsible for protecting their students. He added he's not a supporter of arming teachers, saying investing in school resource officers like Blair Oaks already has is a better action to take.

The purpose of Wednesday's training was to give teachers and staff specific ideas of what to do in the event of an active shooter roaming school halls. Generally speaking, that means staying calm through controlled heartbeats and breathing, getting students to a safe location and then securing that location.

He also said teachers ought to have access to "relatively inexpensive" emergency trauma kits and be trained to use the equipment inside. "You've got to know a little more in today's world than CPR," he said.

Dawn said schools can apply for grants through states and the Department of Homeland Security to pay for training, or districts just budget for training, which Jones said Blair Oaks does.

Brett said grants probably won't cover the cost of trauma kits, but he is aware of businesses purchasing and donating them to schools.

Dawn said Gray Ram has trained people in just about every U.S. state and in Canada - more than 75,000 people in total since the company started in February 2007. She said originally the training they offered was just for law enforcement, "but then Virginia Tech happened" - a mass shooting on the college campus later that year.

Brett said, after every attack, adaptations are made; things that might have been thought to be sound advice after Columbine had to be adapted after Sandy Hook, for example. He said Gray Ram tries to be proactive by looking at building features like doors and locks to determine if they are up to par for keeping intruders out.

He encouraged all classroom doors be locked, even during class. When that or other measures inevitably become daily inconveniences, he said it's important people remember why the inconveniences are worth it.

As for being able to draw a line between being able to ask what ifs and becoming paranoid, he said the difference is about knowing and understanding a response to a potential threat. "It's that unknown that leads to paranoia," he said.

"People don't rise to the occasion. They fall to their training," he told Blair Oaks teachers and staff about navigating emergencies.