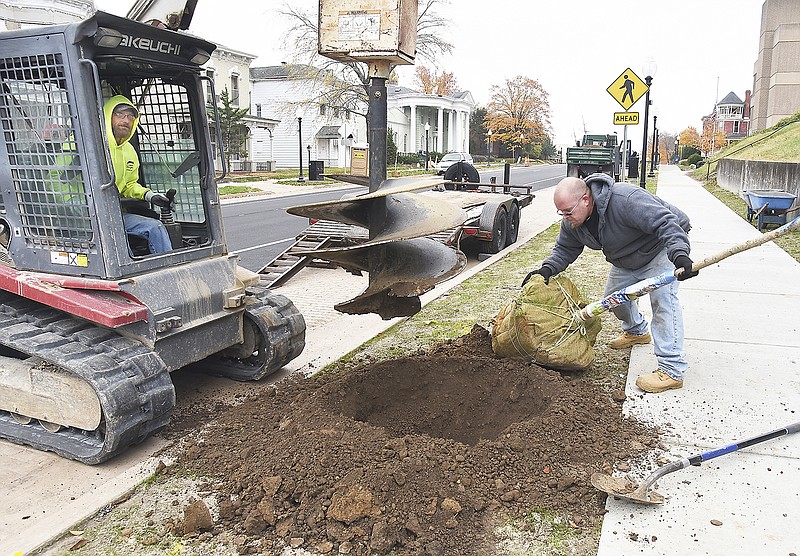 Green Horizons Landscape employees planted several trees in the fall along East Capitol Avenue. John Durham operates the trackhoe while Paul Richards maneuvers the root ball into the hole to check the depth. A number of trees were planted this fall and the rest will be installed in the spring.

Revitalization was the one word Jefferson City Mayor Carrie Tergin used to describe 2017.

For 2018, she hopes to describe it in two words: growth and action.

"A big thing from 2017 is just there were really big projects that had been talked about for many years that are actually starting to take shape now," she said. "We can see them now in our future, things that maybe we wondered how they would ever happen and now they're starting to come to fruition.

"This has been a year of revitalization, and the coming year will be one of growth and action - taking vision and putting it into action and growth. We've seen those seeds planted in 2017, and now we're really going to get to see them bloom in 2018."

Tergin said she thought the city's biggest accomplishment in 2017 was Gov. Eric Greitens signing over 31.82 acres of the Missouri State Penitentiary to Jefferson City. She said the goal for 2018 is to outline what the city hopes to do with that land.

As the state and city continue to finalize the land conveyance, the Missouri State Penitentiary Community Partners - a group consisting of city, county and state representatives approved by the Jefferson City Council in November - will meet starting this month to discuss the redevelopment. Tergin wants the MSPCP to send out a request for proposal (RFP) to developers to begin developing a plan for the 32 acres.

The MSPCP will use the Missouri State Penitentiary Master Plan, created by a 24-member task force in 2001, as a guide for redevelopment. The plan includes hotels, retail stores, restaurants and offices.

The old prison has not housed prisoners since 2004, after the Jefferson City Correction Center moved to its current location at 8200 No More Victims Road. The city's Convention and Visitors Bureau has been operating penitentiary tours since 2009.

"We just had this opportunity sitting there, and it could go two ways: it could either continue to deteriorate or it could be put back into something great for the community," Tergin said. "It's been 14 years watching things deteriorate over there, so we want to act on this now."

Tergin said one of the first items the MSPCP will look at in 2018 is an MSP Parkway that would extend from the circle end of Lafayette Street, east and south through the property, eventually connecting with East Capitol Avenue. Another roundabout would be located east of Chestnut Street.

Of the 31.82 acres the city will own, 4.4 acres would be for a parkway, the Lafayette Street right-of-way would take up 1.5 acres, and the railroad will use 6.2 acres - leaving 19.7 acres for city development.

Tergin thought just the discussions of a conference/civic center and how to move forward was an accomplishment in 2017.

"Even though the conference/civic center hasn't been completed, I think just the fact that we're finally really ready to get to that point and see that happen is an accomplishment," she said.

She added she hoped one of the first things the MSPCP looks at in 2018 is a conference/civic center, and MSPCP members agreed. Ward 5 Councilman Mark Schreiber and Cole County Presiding Commissioner Sam Bushman said in December there was a need in Jefferson City and thought the old prison could be a viable site.

Since a voter-approved lodging tax increase in 2011, the 4-cent tourism fund has more than $4.2 million for the conference/civic center.

In 2017, the $1.5 million streetscape project included new lights and trees, repaired sidewalks and added bicycle lanes. Along with the project, several residents in the urban renewal zone improved their homes after the Jefferson City Housing Authority sent out rehabilitation agreements.

The Housing Authority is also in the process of condemning three properties - 101, 103 and 105 Jackson St. The Housing Authority filed a civil suit in August against Barbara Buescher and Stephen and Cheryl Bratten in hopes of selling and rehabilitating the three homes.

"The clock is ticking on that but at least we're seeing progress on that for the first time in many, many years," Tergin said. "We need to get these (three properties) through the legal process so we can begin with others because there are many properties. So, we're starting with some and then we will continue with that as the new year goes on. If the first ones happen, then the others will follow."

Tergin hopes to push toward developing Adrian's Island in 2018 now that the city secured majority of the estimated project cost, and city officials and Jefferson City Area Chamber of Commerce members toured the island.

In 2017, the city worked with Bartlett & West to develop a plan for the project. The city wants to turn Adrian's Island, a 30-acre piece of land between the Missouri River and Union Pacific Railroad stretching from the Capitol to the old penitentiary, into a park. It also plans to add an 826-foot bridge that extends over the railroad tracks to connect with the island.

"We just want to be able to enjoy it," Tergin said. "This is an asset we have in our community, and for a long time, people have wanted to get to the river and just be able to enjoy what we have."

Part of that $2.3 million includes a $1 million donation from local philanthropist B.J. DeLong, and the one condition attached to her donation was it could only be used for riverfront development.

Tergin said now that the city has majority of the funds raised, along with a proposed plan for redevelopment, the ad hoc committee will continue to approach possible donors in 2018. She added she would like the possible project plan to move to the city in 2018.

"It's not if we'll do it but when because we are that far along," she said. "Now it's just looking at what it's going to take to get that done and finding private donors who will be willing to step up for this very visible park."

Tergin said in order to promote downtown growth in 2018, added parking is needed.

The City Council will vote today whether to authorize an agreement between the city and Rich & Associates so the company can conduct a parking feasibility analysis, including providing recommendations for constructing a downtown parking garage.

"I think that would be really great because that brings a lot of growth," she said. "When we want to develop the area, we're somewhat limited on parking, so that is something I'm really looking forward to in '18."

In 2016, Jefferson City contracted with Rich & Associates to update the city's Parking Planning Study, which focuses on the downtown area. The study found the downtown area was short nearly 1,500 parking spaces, and city staff wanted to do a feasibility study for adding parking.

The City Council rejected a conference center proposal from Ehrhardt Hospitality Group in 2014, which included a new city-built and operated garage. The 250-space garage was proposed for West McCarty Street, but some council members and city staff said the location was not ideal because people would have to walk up the hill from West McCarty Street to East High Street.

At the time, city staff suggested a parking garage have 400-500 parking spaces.