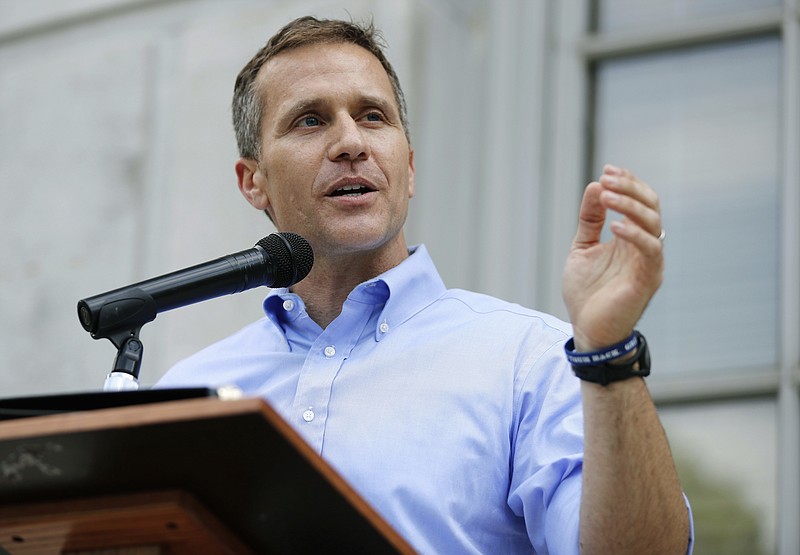 Missouri Gov. Eric Greitens has been indicted on a felony invasion of privacy charge under a state law enacted to punish Peeping Toms who secretly photograph or shoot video of their victims. He's accused of taking a compromising photo in 2015 of a woman with whom he was having an affair without her permission. He has admitted to the affair but denied criminal wrongdoing.

Here is a look at the law and legal questions about it:

It's knowingly photographing or filming another person nude or semi-nude without their consent in a place where the person should have "a reasonable expectation" of privacy, then distributing the images or transmitting them in a way that allows access to it on a computer. Under the version of the law in place at the time of Greitens' affair, the crime was a felony punishable by up to four years in prison.

WHAT HAPPENED IN GREITENS' CASE?

Shortly after Greitens and the woman began having an affair, her husband secretly recorded a conversation in which she said Greitens invited her downstairs at his home because he wanted to show her "how to do a proper pull-up." The indictment says the incident occurred March 21, 2015.

She said on the tape that Greitens "taped my hands to these rings and then put a blindfold on me," took a photo of her partially nude and warned her to remain silent. She said she saw a flash through the blindfold and he told her, "You're never going to mention my name."

Greitens has not answered questions about whether he took a photo and has denied blackmailing the woman.

HOW DID MISSOURI GET ITS LAW?

State lawmakers enacted the first version of the invasion-of-privacy law in 1995, after a southwestern Missouri prosecutor discovered his wife, daughter and two secretaries were among female customers secretly videotaped at a combination tanning salon and video store.

HOW COMMON ARE SUCH CHARGES?

According to the Missouri Office of State Courts Administrator, 274 felony invasion-of-privacy counts have been filed in 36 counties and the city of St. Louis after 2003. In St. Louis city, only one has been filed - apparently Greitens' case.

HOW DOES THE LAW COVER GREITENS' ALLEGED CONDUCT?

His attorneys argue it doesn't. In a request to have the charge dismissed, they said the law does not apply to adults engaging in consensual sexual activity. Allowing Greitens' case to go forward, they said, could lead to "criminalization of routine activity between consenting adults."

However, former state House Speaker Jim Kreider, who sponsored the 1995 legislation, said he believes the law applies to more than voyeurs who photograph or videotape strangers. He believes it covers instances in which a spouse takes a photo or video of another spouse without consent in their home.

"The whole key here is the reasonable expectation of privacy," he said.

WHAT EVIDENCE DO PROSECUTORS HAVE?

That's not yet clear, though the woman's ex-husband was subpoenaed to testify before the grand jury.

Greitens' former lover almost certainly would have to testify because of his constitutional right to confront his accuser.

Ben Trachtenberg, an associate law professor at the University of Missouri, said it would be key to a successful prosecution. Without it, he said, "it is hard to see how there is a case."

"If the charge is that somebody has illegally taken a certain photograph, the jury is going to expect to see the photograph," Trachtenberg said.