Pressure to legalize marijuana in Missouri is high 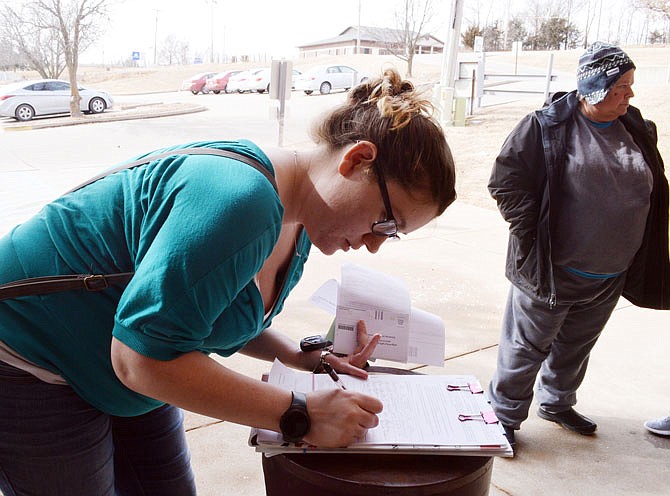 Virginia Fletcher signs a pro medical marijuana initiative outside the Department of Motor Vehicles on Wednesday.

Support nationwide for marijuana legalization is at a five-decade high, according to a Gallup poll conducted in October.

And rising numbers of petitions and bills - even one joint resolution - calling for legalization in Missouri mirror the trend.

It's no joke. With 19 petitions in play and five bills in the Missouri House under consideration, people on both sides of the issue are lining up for a scrum.

House Joint Resolution Number 86, filed Thursday, is a serious attempt to get the state in line with a national trend, according to the resolution's sponsor, state Rep. Courtney Curtis, D-Ferguson.

"It's about changing the conversations," Curtis said. "The numbers we see on social media show there's a high number of people in favor of legalization."

But communities and government leaders oppose legalization in any form, said Joy Sweeney, director of the Jefferson City-based Council for Drug Free Youth.

"They're coming out strongly against marijuana," Sweeney said. "When you give (lay people) options like decriminalization, they edge out legalization. That includes states that already have it legalized."

Although Colorado legalized marijuana use for adult uses in 2012, many of that state's communities later "opted out" of retail marijuana sales by voting to not allow commercial sales of marijuana in their towns and counties.

That's a concern the petitions bring up, Sweeney said. Most don't include an "opt out" clause.

When compared to other drugs Missouri regulates, such as alcohol and tobacco, state Rep. Peter Merideth, D-St. Louis, said, "it's just starting to seem silly to people that we're not regulating it, taxing it, bringing in the revenue from it."

People of widespread political viewpoints share that realization, he said.

As with many other divisive issues, Missouri lawmakers take the approach that other states should test out the issue in question and Missouri should fall in the middle.

That seems to have already happened, he argues. When Vermont's governor signed a bill into law Jan. 22, that state became the ninth to legalize marijuana. The law allows people 21 and over to possess up to 1 ounce of marijuana and to keep two mature marijuana plants and four immature plants per household, according to the Burlington Free Press. The law takes effect July 1.

Twenty-three states have agreed to legalize some form of medical marijuana.

This is a social issue, Merideth said.

Republicans overwhelmingly agree Missouri is wasting money, hurting communities and criminalizing something that shouldn't be criminal by keeping marijuana illegal, he said. And the state could repair a "huge portion" of its budget woes through legalization and taxation of marijuana.

But those legislators are most likely to vote against legalization bills because their constituents would demand it.

The potential to generate revenue for the state is a significant component of one of the petitions for which people are seeking signatures - known as the Bradshaw Amendment.

If you've been to the Driver's License Bureau on Southridge Drive in Jefferson City, you've probably been approached by people seeking signatures for the petition.

They stand outside the office every day asking people if they are voters. If the answer is "Yes," they ask the voter to sign the medical marijuana bill, named after Brad Bradshaw, who launched the campaign. The petitioners Tuesday said they needed about 160,000 signatures to get their bill on a ballot but did not know how many they had collected.

While many petitions call for taxes on marijuana to range from 2-4 percent, the Bradshaw Amendment calls for a 15 percent tax. The petition limits marijuana to medical use and would fund a state research institute, aimed at developing treatments and cures for cancer and other deadly diseases or conditions. Organizers of the petition estimate it would raise approximately $56 million annually.

Marcus Leach, campaign manager for the initiative, said organizers want to "move away from a pharmaceutical industry seeking to maintain patients.

"We have some of the best universities with medical schools. There's no reason we shouldn't be investing in that to find cures," Leach said.

Certainly, medical marijuana does not cure any diseases, Leach said, but it does help patients manage symptoms.

That is a red herring, Sweeney said.

"The lines get blurred when you start talking about these things," she said. Similar arguments were made for alcohol during Prohibition, she added.

Increased access to marijuana and its unintended consequences for youth and children can be devastating, Sweeney noted.

Data show marijuana-related traffic deaths increased from 55 in 2013 to 125 in 2016 (127 percent change). Colorado had the highest rate of youth marijuana use of any state (55 percent above the national average). Marijuana-related hospitalizations almost doubled in five years.

Regardless of what people think of marijuana, Curtis said, there are other drugs affecting communities that demand more attention.

As Missouri sits idle, he said, it's falling behind other states.

"If another state outpaces us, that can be a missed opportunity for Missouri," Curtis said. "Legalization is something that can bring revenue to the state. Growing as fast as we have, we have to look at mechanisms for creating revenue."