Initiative trains veterans to be firefighters 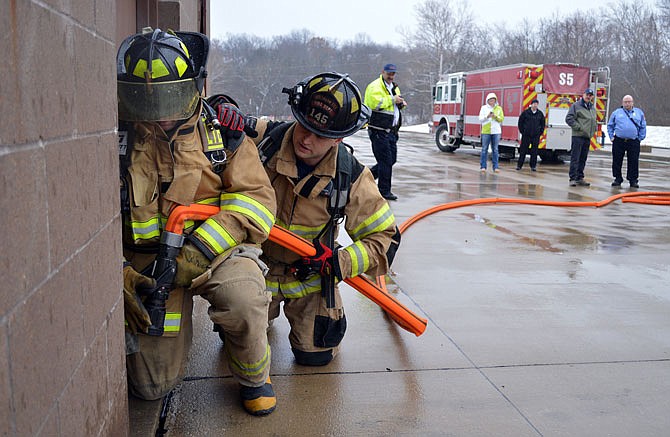 About a half-dozen veterans and active military members from around the state suited up and saved dummies Saturday morning at the Jefferson City Fire Department's Hyde Park training facility.

Participants took part in the first of set of seminars held by the Missouri Department of Public Safety to cultivate an interest in firefighting among veterans. State and local fire officials said the military shares many things with the fire service. Veterans from around Jefferson City said they wanted to learn new skills and new trades.

New Bloomfield resident Eric Schaben works in an administrative position for the Missouri National Guard in Jefferson City. Stuck behind a desk for the past 19 years, Schaben, 45, will retire soon from the National Guard. He's looking for a second act in something other than a desk job.

"It's something I've never done before," he said. "I'm looking to do something a little different."

Brandon Ransom, of Jefferson City, served in the Marines for 10 years where he drove heavy equipment. Ransom currently works as a truck driver.

During his free time, Ransom serves in Wardsville's volunteer fire department. He said he hoped to learn skills that can help him as a volunteer firefighter.

"We don't have half the assets that Jeff City does," Ransom said. "They've got a ladder truck, they got more hands-on training. I just figured I'd come out to broaden my horizons."

Jared Allen, of Fort Leonard Wood, told the crowd he served five deployments as an infantryman in the Army "chasing bad guys all over the world." Allen plans to leave the Army in the next few months and move to Columbia. He would like to get a job as a first responder that mimics what he's done for his whole life.

Gov. Eric Greitens created the program with the help of the Missouri Department of Public Safety's Division of Fire Safety this fall. Missouri Fire Marshal Tim Bean said the military and fire departments share many of the same structures.

Bean said veterans also often know how to pull off water rescues, extrication from cars and other skills that transition into the fire service.

"They see a need to serve their communities," he said. "The commonalities between the military and fire service, it just made a good fit."

Jerry Bloomberg, a division chief with the Jefferson City Fire Department, said 18-20 percent of the department's firefighters already come from the military. JCFD partnered with the state to host the first event because the department hopes to cast a bigger net as it expands its recruiting efforts.

"We recruit from here already," Bloomberg said. "We're always looking to improve our diversity recruiting. The military is more diverse than the fire service in general right now."

"It's gone from 200 several years ago, down to 100," Bloomberg said. "We don't know why. We know public safety in general is having difficulty recruiting."

More than a half-dozen people participated in the event Saturday. About a dozen were expected to participate but could not make it because of snowy weather and other factors. The Division of Fire Safety tried to keep the class small, though, to ensure recruits would get to spend quality time with mentors.

"Hopefully they'll have a lot of their questions answered so they can make a good decision as they go forward in maybe pursuing this," Bean said.

Officials designed the day to put the recruits through some of the same things firefighters experience daily. Recruits pulled hoses, climbed dark stairways and climbed a ladder on a ladder truck - all in full gear. At one station, recruits learned ways to break open doors and save fire victims. At another, they used the Jaws of Life to pry open car doors and save car crash victims.

The job places unique demands on families. Bloomberg said military members, like firefighters, often spend large amounts of time away from home on duty or training.

Firefighters in Jefferson City spend about one-third of their 56-hour work weeks away from their families.

"When that wife or that husband comes home, when their firefighter is at work, they're a single parent," Bloomberg said. "My wife always said I'm a single parent a third of the time."

Saturday's event served as a pilot event for the program. Similar events will be held in Cassville on April 28 and Springfield on May 12. Other events will be scheduled soon in Kansas City and Poplar Bluff.

Bean said, after Saturday, the Division of Fire Safety will work to improve the events.

"We will step back from this and see what we did right, what we did wrong, repackage it, and get ready to take it back out on the road," Bean said.