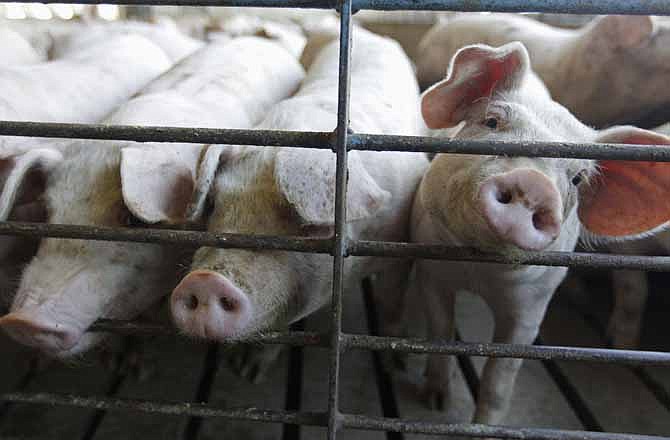 An out-of-state company has applied to the Missouri Department of Natural Resources to construct a proposed CAFO hog operation, Tipton East, in Cooper County near the Moniteau County town of Clarksburg.

PVC Management II LLC, which submitted the application, is a trademark of Pipestone System, based out of Pipestone, Minnesota.

CAFOs, or concentrated animal feeding operations, are a highly contested method of raising a large number of livestock in a confined area. Supporters tout the system's efficiency, while opponents say it as a form of factory farming that is harmful to the environment and detrimental to the health, property value and quality of life of nearby residents.

According to the application, the operation on Renshaw Drive on the southern edge of Cooper County will consist of a gestation building housing 4,704 sows, a farrowing building housing 1,080 sows, and a gilt-development unit for 1,620 females weighing more than 55 pounds and 324 nursery pigs. The resulting manure would be stored in 10-foot-deep pits below the containment facilities, which eventually would be injected into Cooper County cropland. Hog carcasses would be composted in a separate, above-ground unit on site with a capacity of 186 tons per year.

The application comes after as much as 10,000 gallons of hog feces from the CAFO Pork Master Inc. was spilled in October 2014 during manure application in Callaway County. The spill reportedly flowed into a tributary of Millers Creek, across the property of Ronnie O'Neal and Sue Crane, who reported the incident, and into Mark Twain National Forest.

Local opposition to the Tipton East proposal already has mounted. Cooper County resident Fred Williams lives less than a mile from the proposed site. He said more than 100 people gathered Jan. 23 at Oakland Baptist Church outside Clarksburg to discuss the issue with company representatives, county commissioners and other stakeholders. Williams said the majority of those present were opposed to the project, while the small number of people who voiced support were not from the area and had a potential financial interest in the project.

"Overwhelmingly, the majority of the people in the area are opposed to this type of (CAFO) operation going in here for the potential for human risk to health, whether it is through the water, through the air, whether it's from the site itself, or from the application of manure and the runoff associated with it," Williams said.

Opposing residents are circulating a petition to request the Cooper County Commission support a health ordinance to safeguard area farms and families from the negative impacts of CAFOs. The petition cites resident health, air quality, water quality, property devaluation, road wear and tear, and quality of life among concerns of CAFO installation in Cooper County. It can be accessed at ipetitions.com/petition/petition-protect-cooper-county-from-factory-farms.