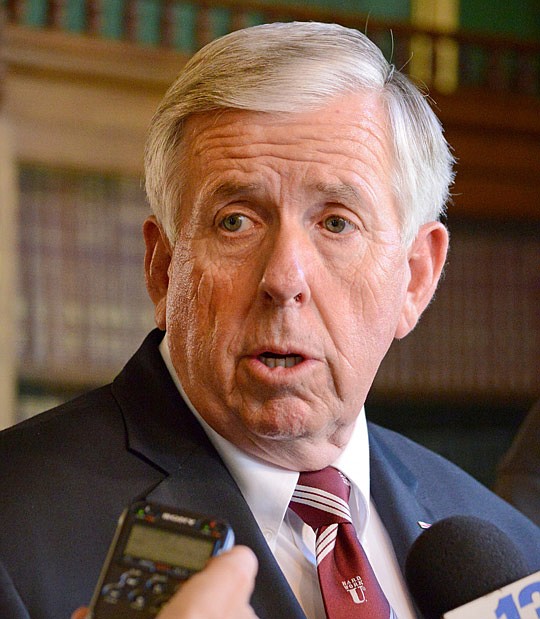 Gov. Mike Parson said Tuesday he wants to enact a law enabling the state to collect millions of dollars of new tax revenue from out-of-state retailers who sell things to Missouri residents.

The new online sales tax provision will be part of Parson's agenda for the legislative session that starts Jan. 9, the governor said in an interview with the Associated Press.

Though there is no definitive plan yet for the potential new revenue, it could help propel other aspects of Parson's agenda to boost infrastructure funding and workforce development.

The U.S. Supreme Court opened the door for states to rake in greater online sales tax collections in a June ruling that upheld a South Dakota law. That decision overturned a decades-old precedent stating businesses without a physical presence in a state - such as a store, office or warehouse - didn't have to collect sales taxes on behalf of the state. In such cases, customers technically were responsible for paying the tax, but most didn't.

As online commerce has grown, some large retailers such as Amazon already had begun collecting sales taxes for all 45 states that charge them. But others with a physical presence in only a few places haven't been doing so.

"If we're going to compete with internet sales, it sure ought to be fair with the brick-and-mortar businesses that are here," Parson told the AP. "I think we should collect that, and I think we will eventually collect that."

Parson said a state law enabling online sales tax collections could generate $100 million-$150 million annually for the state, though he emphasized those are only estimates.

Missouri charges a 4.225 percent sales tax. But counties, cities, fire and ambulance districts and various other local jurisdictions tack on their own sales taxes. The total sales tax rates reach as high as 11.679 percent in some St. Louis community and transportation development districts.

A tax table available from the Missouri Department of Revenue shows about 2,350 different sales tax rates in Missouri, making it complicated for retailers who sell products throughout the state.

At least 29 other states have already implemented laws to collect sales taxes from remote retailers or will be doing so in January or February, according to the National Conference of State Legislatures.

Parson said it remains to be decided what to do with the additional revenue Missouri would receive.

But he noted his main goals as governor are workforce development and infrastructure, and he said the state needs to come up with a new funding stream for transportation after voters in November defeated a proposed 10-cent-a-gallon increase in the gas tax.

Parson said bonding also is a potential source of more money for infrastructure projects that could include roads and bridges, river ports and airports, and utility and high-speed internet systems.

Some states also have been looking to generate new revenue from sports betting after New Jersey won a U.S. Supreme Court case in May that cleared the way for widespread legalized sports gambling.

Parson said he expects the Legislature to address the issue and will review any bill that passes.

But "I'm not going to be promoting sports betting. It's not a priority of mine," Parson said.

"On the personal side of me, it's probably one of those things I'm not sure is the greatest thing to do," Parson added. But "as the governor of the state of Missouri, I think the people have got to decide that."