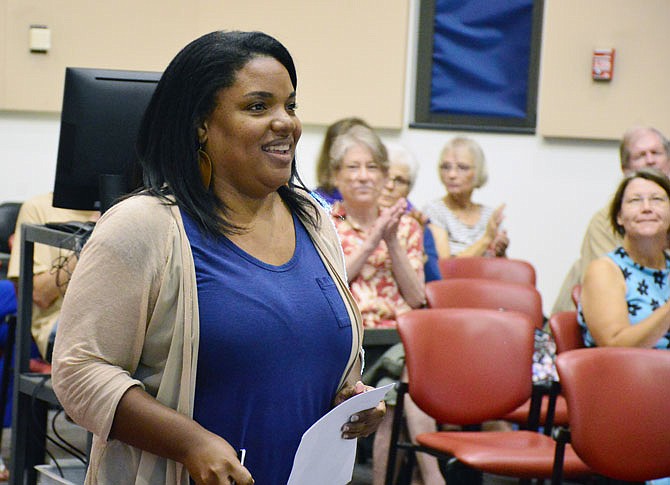 Nicole Porter of The Sentencing Project is introduced as the speaker Wednesday at Lincoln University's Page Library.

A speaker told listeners Wednesday night at Lincoln University that Missouri is one of eight states whose prison populations have continued to grow in recent years, putting pressure on state revenue and resources.

Other states have started to decline, according to Nicole D. Porter, who manages state and local efforts for The Sentencing Project, a national research and advocacy center that aims to reduce the use of incarceration in the United States. Porter told about 50 people listening in Page Library that New Jersey has had a 37 percent decrease in its prison population.

During the evening's discussion, she talked about how reductions of incarcerations of non-violent offenders can lead to better outcomes and reduced costs for Missouri.

"These issues are really impactful; they hurt and they harm," she said. "It's not to excuse any behavior that may lead to crime or harm to victims but it is about incarceration that is incredibly punitive."

Earlier this year, the Missouri General Assembly raised the minimum age for juvenile justice, and the same can be done for incarceration, she said.

"This is the start of the conversation."

Up until about 50 years ago, the national incarceration rate was flat. But because of increased minimum sentencing, the war on drugs, three-strikes-and-you're-out rules, lower parole rates, politicization of parole and other issues, it has increased by 500 percent since 1972.

And the state's overcrowded prisons are straining its belt line, said Jeanette Mott Oxford, executive director of Empower Missouri, which advocates for a just, equitable and democratic society that assures every person's health, safety, security, independence, human rights and dignity. Because of the state's high incarceration rate, the Council of State Government's Justice Center this year warned two new Missouri prisons would have to be built to reduce overcrowding.

"Our budget is always in a precarious situation," Oxford said. "There never seems to be enough money."

She reminded listeners that revenue for not only prisons, but social services, is scarce. Foster care subsidies are half the national average, she said, and only one in five people who need mental health care get it.

"Add to that that we're going to have to build two new prisons," she said. "We think there are better ways to do things."

Political strategies and reforms have helped reduce inmate populations in other states, leading to closures of some prisons, Porter said.

Michigan reformed a law that had previously imposed a mandatory life sentence for drug offenses involving at least 650 grams (about a pound and 9 ounces), even for first-time offenders.

This is the time to approach lawmakers with a legislative package aimed at reducing prison populations, she said.

"These legislators who champion this stuff love to be patted on the back. They love the notoriety," she said. "Mass incarceration is a sexy issue now. People get cool points for talking about it."