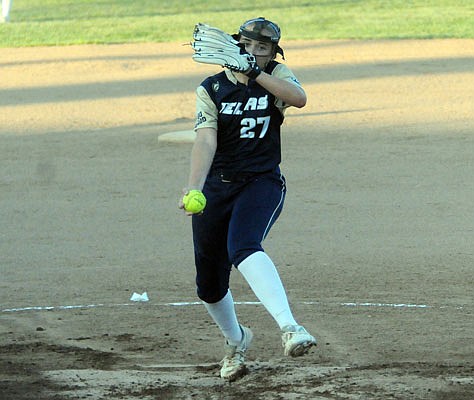 Helias junior Lauren Howell works to the plate in the first inning of Tuesday night's game against the Battle Spartans at the American Legion Post 5 Sports Complex.

One of the unwritten rules is you don't talk about potential no-hitters.

You might think your head coach would know better. But with Lauren Howell holding the Battle Spartans without a hit through six innings Tuesday night, the unwritten rules went out the window, compliments of Dan Campbell.

She let her pitching do the talking in the seventh, retiring the Spartans on 10 pitches as the Lady Crusaders opened the season with a 6-0 victory against the Spartans at the American Legion Post 5 Sports Complex.

"I was going against every rule, talking about a no-hitter with three outs to go," Campbell said with a laugh. "But she got it.

"My pitch count is usually pretty high, that is a good number for me," the junior right-hander said. "I was doing well with my curve and my rise ball was my go-to pitch tonight."

Howell went to a three-ball count just three times in the game.

"That was the key because when she gets ahead in the count, she's in charge," Campbell said.

Howell struck out nine and allowed just one Battle hitter to reach base. On a 1-2 pitch with one out in the sixth inning, Howell hit Brooke Nutter of the Spartans with a pitch.

"I was a little upset about it," Howell said. "But I knew I still had the no-hitter going."

The Spartans hit just one ball to the outfield, a fly to center to end the third inning.

The Lady Crusaders made three strong plays defensively behind Howell.

Helias got runs in the first and third innings to take a 2-0 lead.

In the first, Taylor Woehr led off with an infield single. Walks to Pringer and Rylee Kolb then loaded the bases before Woehr scored on a grounder by Kenley Haslag.

Woehr scored again in the third. She led off with a single, stole second and scored on a single by Pringer.

"If Taylor gets on base, she is going to score some runs this season because she has great speed and we have some girls behind her with some pop," Campbell said. "She can be our catalyst."

Helias doubled its lead on an odd play in the fourth. With two outs, Sara Williams was hit by a pitch and Tori Hartman came on to run. With Emily Harrison at the plate, Battle moved its rightfielder to stand right in front of second base.

Harrison hit a grounder to third and the throw to first was wild and ended up down the line in right. Where nobody from Battle was.

Campbell said he was having a hard time reading whether to send Harrison home after Hartman scored. He did as Harrison circled the bases to make it 4-0.

"I forgot they had the right fielder at second base," he said. "I just sent her. That was great hustle by Emily."

The Lady Crusaders got their other two runs in the sixth when Sophia Carr doubled home Holly Hentges, who had reached on an infield single Carr later scored on a liner to center by Woehr.

Helias had six hits to match its six runs.

Woehr led the way with two singles. The other hits came from Pringer, Carr, Harrison and Hentges.

"We didn't hit very well but we still managed to put up six," Campbell said. "But we played really good defense and got good pitching, hopefully we can keep that going the whole season."

Helias (1-0) is back in action Thursday at the American Legion Post 5 Sports Complex against Rolla.

In Tuesday's JV game, Helias defeated Battle 12-1 in a game shortened to four innings by the run rule.