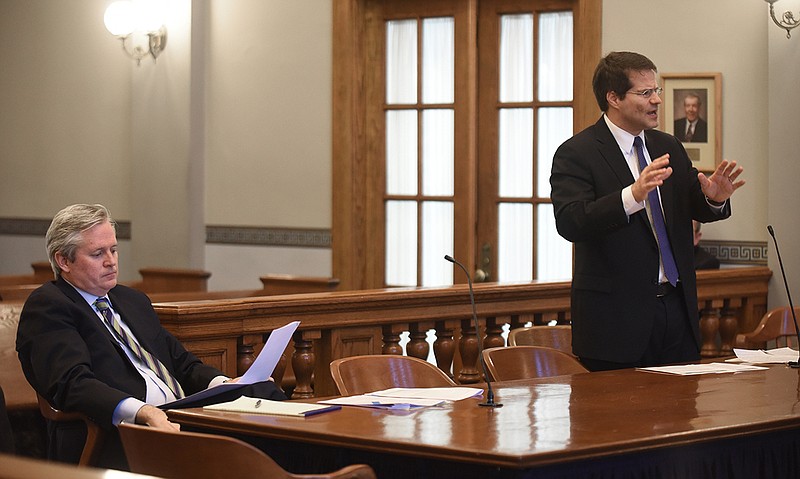 Beetem heard nearly 40 minutes of arguments from attorneys for both statewide officeholders.

St. Louis lawyer Jim Bennett, representing Greitens, argued: "We believe that any fair inquiry into Mission Continues would show that it is a charity that he developed and that he didn't do anything wrong with. What is important is that, in press conferences and press announcements, we believe there is an indication here of facts that would rise to an appearance that would call on the attorney general to step down from this particular investigation - just to remove the politics of it."

Bennett said Hawley had made "out-of-court statements" about Greitens, including urging the governor to resign or face impeachment following the April 11 release of a House committee report providing details of Greitens' affair with his then-hairdresser, that began in March 2015, and included allegations of assault and taking a picture of the woman without her permission while she was at least partially nude.

And, Bennett said, when Hawley announced April 17 that he'd found problems with Greitens' reported use of The Mission Continues' donor and email lists, the attorney general's statements went beyond what was proper.

But, countered D. John Sauer, Hawley's solicitor and first assistant attorney general: "There's no possible basis to conclude that the attorney general, who has exercised outstanding leadership at this very difficult time for our state - through his restrained public statements on matters of enormous public import - has somehow created a conflict of interest that would prevent him from (carrying out) the executive functions the voters entrusted him with when they elected him attorney general."

Sauer said the court rules that Bennett accused Hawley of violating are intended for prosecuting attorneys, and "the attorney general is not a prosecutor."

Sauer said Greitens' request for a temporary restraining order was "seeking an extraordinary remedy" when it isn't needed.