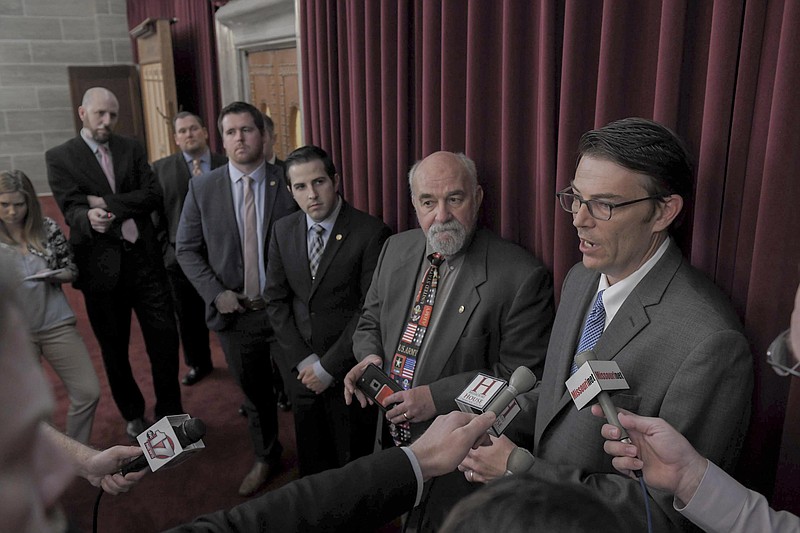 Missouri House members have made "significant progress again this week" in collecting signatures to call a special session, according to Speaker Todd Richardson, R-Poplar Bluff.

"We've begun discussions with the minority party to get their members' signatures," Richardson said. "So that process is on track."

A St. Louis grand jury indicted the governor Feb. 22 on an invasion-of-privacy charge connected with a March 2015 incident in his St. Louis home. The incident reportedly included Greitens' binding and blindfolding his then-hairdresser, ripping off clothes he had given her to wear and taking a picture of her partially nude without her permission. Greitens has admitted to having an affair but denied breaking any laws.

Richardson organized a special investigative committee shortly after Greitens was indicted to look into the circumstances surrounding the charge.

A transcript included with the committee's report showed the panel also met with an official of The Mission Continues, a St. Louis-based veterans charity the governor helped found in 2007.

Last week, St. Louis Circuit Attorney Kim Gardner charged Greitens with a second felony for allegedly taking The Mission Continues' donor and email lists without the charity's permission and using them for his campaign. He was charged with tampering with a computer.

Richardson is among a number of lawmakers who have called on the governor to resign.

Richardson said Thursday that he didn't know how many signatures had been gathered, but "well over a majority of Republicans" had signed and he expected the same from Democrats.

"Everybody thinks things are going to happen on a timeline, but the reality is that the process of going to members and collecting signatures from 163 members takes some time," he said during a news conference Thursday afternoon. "The process is on track and the process is exactly where we expected it to be."

The committee investigating Greitens has continued its work after releasing its report, and has have been looking into The Mission Continues and the facts surrounding those allegations, Richardson said.

"I anticipate in the near future, they'll have a report."

"(The hiring) signaled to me that the committee needed some help, both with the investigation and with the legal matters that are involved in that investigation," Richardson said. "We're happy to have both of those gentlemen on board and their expertise in the process moving forward."