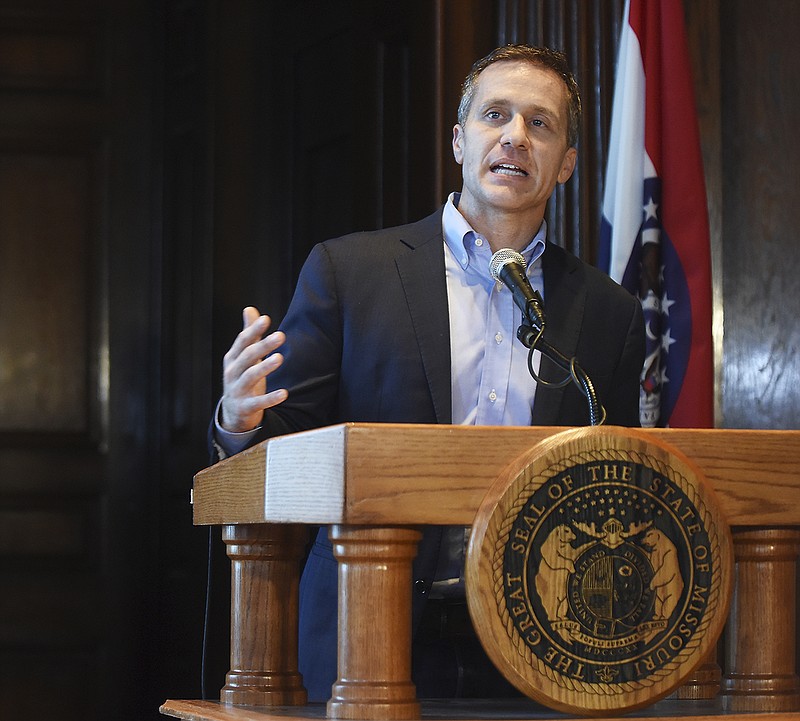 Robertson will be joined by Mark Kempton, a former Pettis County prosecuting attorney.

Committee Chairman Jay Barnes, R-Jefferson City, confirmed the hiring Wednesday evening, but did not return a call to the News Tribune.

The two attorneys are being paid only for out-of-pocket expenses, the Kansas City Star reported.

The March 1 resolution approving the creation of the special House committee authorized it to hire special counsel and other personnel "as it deems advisable to assist its investigation," but Barnes did not explain why that decision was made now, or what role the two lawyers would play in the committee's continuing work.

"Judge Robertson provides experience and knowledge to our committee as we continue to fairly and thoroughly investigate the facts," Barnes told the Star. "We welcome the expertise of Judge Robertson and Mark Kempton as the committee continues its work."

Robertson, now a private practice lawyer with the Bartimus Frickleton Robertson Rader law firm, had met with the committee for about 40 minutes Wednesday morning.

When asked after that morning meeting why he was there, Robertson told reporters: "I can't. I'm sorry."

He also declined to say if he was representing anyone or any interested party.

Then-Gov. John Ashcroft appointed Robertson - who had worked with Ashcroft in both the governor's and attorney general's offices - to the seven-member Supreme Court in 1985. He served as chief justice from 1991-93, and left the court in 1998 to return to private practice.

Robertson was on the court when it convicted then-Secretary of State Judy Moriarty in 1994.

House Speaker Todd Richardson, R-Poplar Bluff, formed the seven-member Special Investigative committee in late February, following a St. Louis grand jury's Feb. 22 indictment of the governor on an invasion of privacy charge connected with a March 2015 incident in the basement of his family's St. Louis home.

That incident - which reportedly included the then-future governor's binding and blindfolding his then-hairdresser, ripping off clothes he had given her to wear, and then taking a picture of her at-least partially nude body, without her permission - occurred before Greitens had launched his campaign for the governor's office.

He has admitted having an affair, but has denied doing anything that violated the state's criminal laws.

Two weeks ago, the committee released a 24-page report detailing the affair and the reported incidents of sex and violence raised by the woman.

Greitens, who declined to be interviewed by the committee before his May 14 trial on the St. Louis criminal charge, has called the House report "incomplete" because it doesn't include his version of the incidents.

The governor also has said the testimony from others listed in the report includes "falsehoods" and "lies."

But the March 1 House resolution that was passed unanimously - 154-0 - did not limit the committee's work to investigating only the reported affair and events associated with it.

A transcript included with the April 11 release of the committee's report indicated the panel also met with an official of The Mission Continues, a St. Louis-based veterans charity the governor helped found in 2007.

Last week, St. Louis Circuit Attorney Kim Gardner also charged Greitens with a second felony - tampering with a computer - for taking The Mission Continues donor and email lists without the charity's permission, and using them in his campaign for the governor's office.

Both of the charges filed in St. Louis are Class D felonies, and conviction on either charge could lead to a maximum punishment of up to four years in prison.

The panel been meeting since early March in closed sessions, first at the Jefferson City Police Station and, more recently, in an office in the Capitol's basement.

Wednesday's committee meeting was in a small House hearing room. Brown paper covered the windows, and the doors to the hearing room were locked during the meeting.

But, so far, no date or time for releasing such a report has been announced.