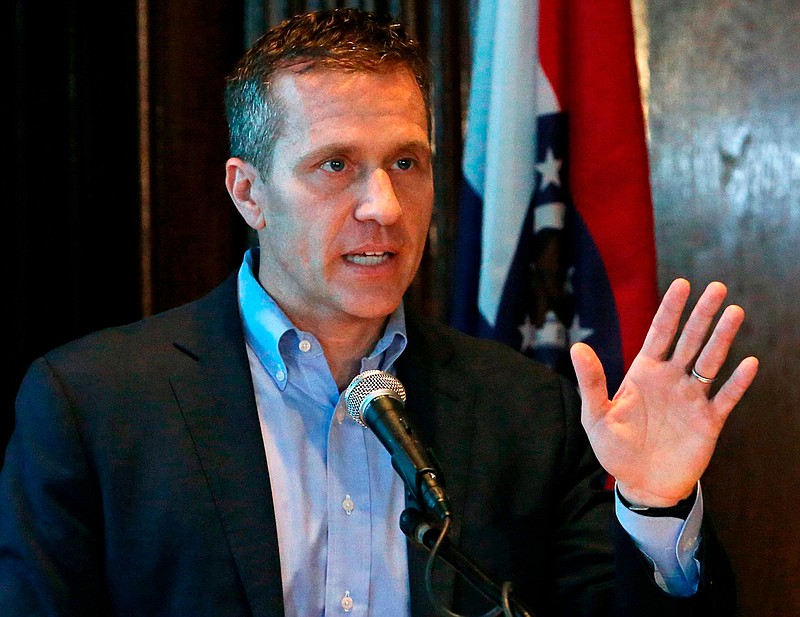 FILE - In this April 11, 2018 file photo, Missouri Gov. Eric Greitens speaks at a news conference in Jefferson City, Mo. A judge is expected to consider a request to disqualify St. Louis prosecutors from one of the two felony cases against Gov. Greitens. A hearing is scheduled for Tuesday, April 24, 2018 in the computer data tampering case against Greitens. Defense lawyers asked Judge Rex Burlison to require a special prosecutor in the computer tampering case, citing the use of a private investigator in the other felony case against Greitens. (J.B. Forbes/St. Louis Post-Dispatch via AP, File)
Previous coverage of Greitens investigations

While building a national nonprofit for military veterans, former Navy SEAL officer Eric Greitens solicited millions of dollars from hundreds of wealthy individuals, corporations and foundations. While later launching a Missouri gubernatorial campaign, Greitens again raised millions from many of those same donors.

In politics, it's normal to tap your social network of friends, acquaintances and business contacts to help finance your campaign.

But prosecutors allege Greitens' took it too far in 2015 far by using an actual donor list of The Mission Continues for his political campaign without the permission of the St. Louis-based charity he founded. If a jury agrees Greitens committed a crime, he could face prison time.

The felony charge of tampering with computer data is the second pending against the Republican governor. Greitens already faces a May 14 trial on a felony invasion of privacy indictment alleging he took and transmitted a nonconsensual photo of a nude woman in 2015. Greitens, who also could face impeachment stemming from a legislative investigation, has admitted to an extramarital affair but denied criminal wrongdoing.

When a St. Louis prosecutor filed the charity-related charge last week, Greitens' attorney Ed Dowd responded with a written statement seeming to suggest Greitens was entitled to the donor list.

"Eric made the Mission Continues. He raised millions of dollars for it," Dowd said.

"Now he's being accused of stealing an email list from an organization he built? Give me a break," Dowd added. "Not only did he create this list donor by donor, friend by friend, but the Mission Continues still has the list. The idea that this is a crime is absurd."

But legal experts interviewed by the Associated Press said the fact Greitens cultivated and created the charity's donor list does not mean he can use it for other purposes.

But "being a director or officer - no matter how valuable and how instrumental in the growth of that charitable organization - does not entitle you to steal or otherwise benefit from that charity's resources," Solomon said.

Federal law bars 501(c)(3) charities such as The Mission Continues from intervening in political campaigns on behalf of candidates. The IRS has ruled charities cannot give donor lists to politicians but can rent them at fair market value if made available to all candidates.

The Mission Continues has repeatedly asserted it neither provided nor authorized any political campaign to use its donor list, including Greitens' campaign.

Greitens had access to the donor list as chief executive, but "it wasn't OK to use it for anything other than that purpose," The Mission Continues spokeswoman Laura L'Esperance said.

Greitens, 44, founded The Mission Continues in 2007 to help military veterans get involved in their communities while gaining work skills and a sense of purpose. He stepped down as CEO in July 2014, created a campaign fundraising committee in February 2015 and remained on the charity's board until September 2015.

The AP first reported in October 2016 - about a month before Greitens won election - that Greitens' campaign had accessed a Mission Continues spreadsheet listing the names, emails and phone numbers of individuals, corporations and other nonprofit foundations that had donated at least $1,000 to the charity. The spreadsheet's properties indicate it was created by a Mission Continues employee in May 2014, while Greitens was still in charge, and saved in March 2015 by a consultant working for Greitens' political committee.

The charity spreadsheet lists information on about 830 donors. The AP determined Greitens' campaign had raised about $2 million from donors associated with that list. Of the roughly $525,000 Greitens raised during the crucial first two months of his campaign, about 85 percent came from donors who previously gave to The Mission Continues.

At the time, Greitens specifically denied using the charity's list to raise political contributions, but he acknowledged soliciting political money from some people who gave to the charity.

Legal experts say there is a subtle but significant difference between using a charity donor list for a political campaign and simply raising money from people whom Greitens met as a former charity CEO.

"If the CEO is just using names in his Rolodex I think that's one thing. If the CEO is using a list that came from the charity, that would be misuse of the charity's property," said Arthur Rieman, managing attorney for The Law Firm for Non-Profits, a suburban Los Angeles firm that has represented more than 1,000 nonprofits during the past couple decades.

Last year, Greitens acknowledged in a settlement with the Missouri Ethics Commission that his campaign had in fact received a Mission Continues donor list and failed to report it. But legal experts said that doesn't mean he was free to use it.

"For large organizations, the donor list is something that's constantly cultivated and jealously protected," said David L. Thompson, an attorney who is vice president of public policy at the Washington-based National Council of Nonprofits. "The list belongs to the organization. It is not a personal list."