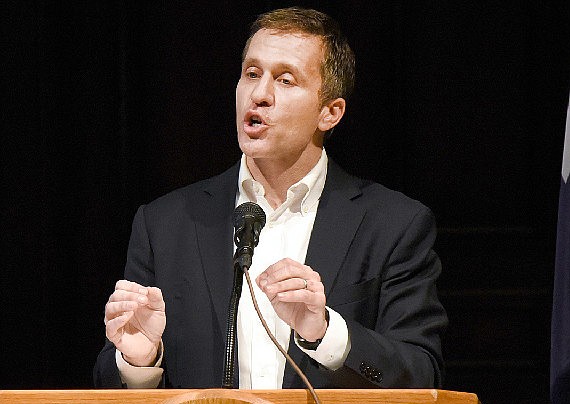 ST. LOUIS (AP) -- A St. Louis judge on Thursday rejected a request from Missouri Gov. Eric Greitens to dismiss a felony criminal indictment against him, but sanctioned prosecutors for failing to turn over evidence as soon as they should have.

Greitens was indicted in February on a charge of invasion of privacy. He's accused of taking and transmitting a nonconsensual photo of a partially nude woman with whom he had an affair in 2015, before he was elected. Greitens has admitted to what he says was an "entirely consensual" affair and has denied criminal wrongdoing.

Attorneys for Greitens say a private investigator hired by the prosecutor has repeatedly lied to the court. They also allege that Circuit Attorney Kim Gardner knew he lied, and that her office has withheld evidence from the defense.

Circuit Judge Rex Burlison's sanctions allow the defense to retake depositions with the woman who is at the center of the case and with the private investigator. Both are expected next week, said Susan Ryan, a spokeswoman for the circuit attorney's office.

Attorneys for Greitens have said prosecutors withheld a videotaped deposition with the woman until an hour before a special state House committee released a report last week that cited allegations of unwanted sexual aggression, and has been slow to turn over other evidence.

Defense attorneys also said 11 pages of private investigator William Tisaby's notes from a deposition of a friend of the woman, requested weeks ago, were not turned over until Sunday, and only after Gretiens' lawyers threatened to go to court to ask for them.

"These rules are not mere rules of etiquette," the judge said. "Clearly in this case the state has committed sanctionable discovery violations of the rules of criminal procedure."

Greitens' attorneys have also argued that Tisaby has repeatedly lied to the court. For example, he said he didn't take notes during an interview of the woman, but photos and a video showed him taking notes. In another instance, Tisaby said he checked his laptop for notes during a deposition lunch break, but later said the laptop wasn't even in St. Louis, defense attorneys said.

Prosecutors have said they made a mistake in relying on Tisaby but that it didn't warrant dismissing the case.

Tisaby has not returned phone and email messages from The Associated Press seeking comment.

Greitens' trial is scheduled for May 14. It's among many worries for the Republican governor. A growing number of lawmakers, including all of the top Republicans, have called on Greitens to resign.

Those resignation calls increased after Republican Attorney General Josh Hawley said Tuesday that an investigation by his office determined that Greitens may have committed another crime by using a donor list from the veterans' charity he founded, The Mission Continues, to raise money for his gubernatorial campaign without the charity's permission. Since the alleged crime happened in St. Louis it will be up to Gardner, a Democrat, to decide whether to file charges.

Ryan declined to speculate Thursday on whether new charges would be filed.

Hawley also turned over his findings to the House investigatory committee, which is to recommend in the coming weeks whether to pursue impeachment proceedings to try to remove Grietens from office.

House Speaker Todd Richardson said Thursday that the panel is moving "as expeditiously" but "as thoroughly" as possible and has no particular deadline. The Legislature is to end its regular work May 18. Richardson said a "substantial" number of Republican House members have already signed a petition to call the Legislature into a special session if needed to consider impeachment.