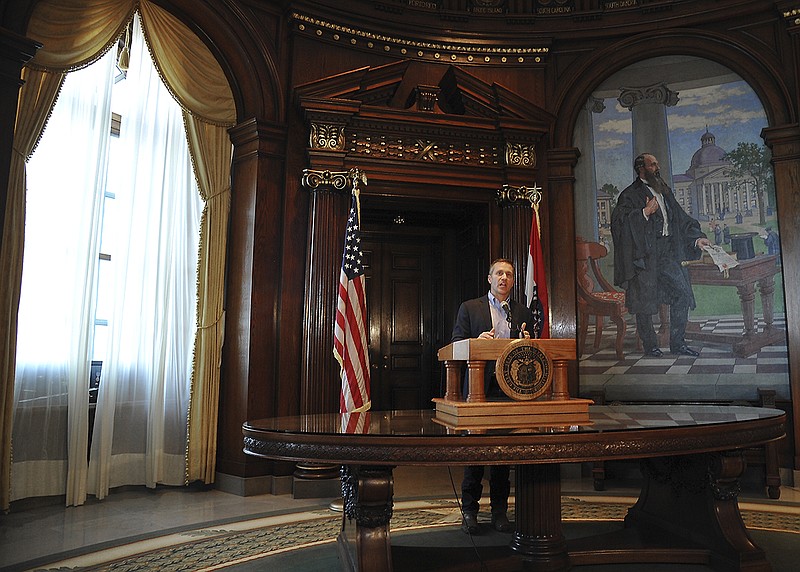 Richard urged the House to begin the impeachment process now, instead of waiting for a special session after the regular session ends May 18.

Their statements came just hours after Attorney General Josh Hawley said his investigation found Greitens, a Republican, likely broke state law by taking donor and email lists from The Mission Continues - a veterans service charity he helped found in 2007 - and used them for his campaign fundraising.

"We have reached a critical turning point in the allegations made against the governor," Richard, R-Joplin, said in a news release. "The decisions made going forward will have a significant effect on the state of Missouri.

"After speaking with the attorney general (Tuesday), I believe the governor has no other respectable option than to resign from office."

And if that doesn't happen, Richard said: "Because of the severity of the allegations, it is my wish that we immediately start impeachment proceedings."

However, only the House - not the Senate - can consider or approve articles of impeachment.

Last week, a special House committee chaired by Rep. Jay Barnes, R-Jefferson City, issued a 24-page report detailing an affair Greitens had in 2015 with his hairdresser - including allegations the then-future governor tied the woman to exercise bars in the basement of his St. Louis home, ripped off some of the clothes he had her put on, took her picture without her permission and convinced her to have oral sex with him.

The governor has admitted to the affair, but denied the other allegations, calling them "falsehoods and lies."

Tuesday evening, House Speaker Todd Richardson, Speaker Pro Tem Elijah Haahr and Majority Floor Leader Rob Vescovo - all Republicans - issued a joint statement: "At the outset of this process, we said the governor needed to be forthright and accountable for his actions.

"After thoughtful consideration of the findings in the House committee's report (last week) and (Tuesday's) news that the attorney general has evidence to support another felony charge, we believe the governor needs to take responsibility for his actions."

The statement from Richardson, of Poplar Bluff, Haahr, of Springfield, and Vescovo, of Arnold, continued: "Leaders at all levels of government are entrusted with an incredible responsibility to the Missourians we represent. When leaders lose the ability to effectively lead our state, the right thing to do is step aside.

"In our view, the time has come for the governor to resign."

Richard, the only Missourian so far to be chosen both as the Senate's leader and the House speaker, said: "Serving the people of Missouri is an extraordinary honor, one I believe requires each elected official to rise to the occasion. Sometimes that occasion is knowing when it's time to step aside.

"We are past the point of concerning and alarming."

Richard said Greitens "has caused tension, conflict and hostility" since he became governor in January 2017.

Greitens' "alleged illegal actions are further harmful to the people of Missouri and do not represent Missouri values," he said. "It's time for the governor to find the courage in his heart and do what is in the best interests of the people he serves and step aside."

Greitens issued a statement on Twitter shortly after the House and Senate statements saying he won't resign.

"In three weeks, this matter will go to a court of law - where it belongs and where the facts will prove my innocence," Greitens said in the statement. "Until then, I will do what the people of Missouri sent me here to do: to serve them and work hard on their behalf."