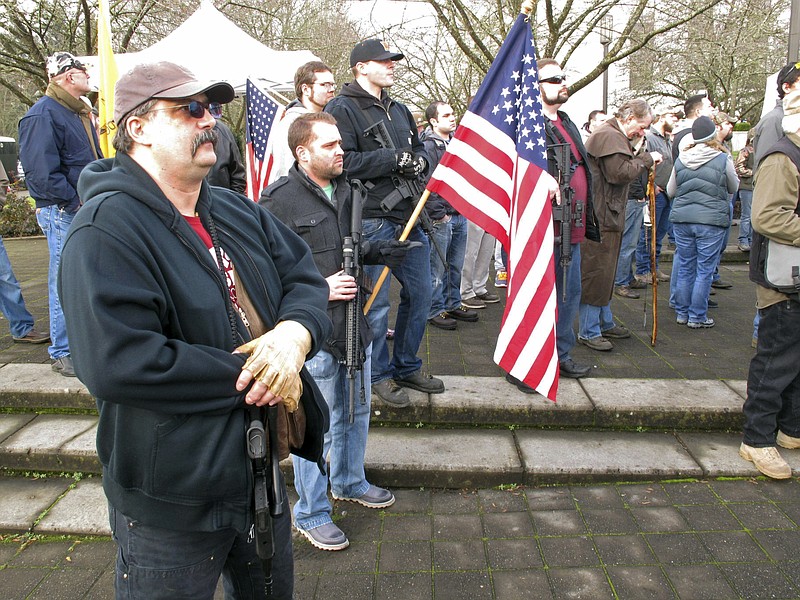 This Feb. 8, 2013 file photo shows pro-gun demonstrators at a rally outside the state Capitol in Salem, Ore. Organizers are encouraging gun rights supporters to bring unloaded weapons to rallies at state capitols across the U.S. this weekend of April 14, 2018, to counter a recent wave of student-led protests against gun violence. (AP Photo/Jonathan J. Cooper, File)

Organizers are encouraging gun rights supporters to bring unloaded rifles to rallies at state capitols across the U.S. this weekend, pushing back against a wave of student-led gun violence protests that some see as a threat to the Second Amendment.

A group called the National Constitutional Coalition of Patriotic Americans spread word of the gatherings on social media. Organizers have permits for rallies Saturday outside 45 statehouses, said David Clayton, of West Virginia, one of the coalition's founders.

The rallies come less than three weeks after hundreds of thousands marched in Washington, New York and other U.S. cities to demand tougher gun laws after the February school shooting that killed 17 in Parkland, Florida. It's unclear how many will show up - turnout predictions of national organizers are vastly higher than those of local planners.

Clayton said a new gun law in Florida and similar measures being considered in other states threaten the rights of law-abiding gun owners. He said those attending rallies are encouraged to carry rifles - unloaded, with no magazines inserted - in states where it's legal.

"This is a very peaceful approach to a show of force," Clayton said. "What that means is we're not going to go there looking for a fight. We're saying, 'Look at all the people gathered here. We have a voice too.'"

Most U.S. states allow long guns to be carried openly in public spaces, though other legal restrictions may apply. In Maine, for example, the statehouse grounds are a gun-free zone.

Assembling near the state Capitol on Saturday could prove expensive, at least for organizers in Georgia. They're being asked to pay about $6,700 to cover overtime for state troopers to provide security. Capt. Mark Perry of the Georgia Department of Public Safety said that's because the rally is on a weekend - permitted assemblies are free on weekdays when statehouse security is fully staffed.

"It's an insult," said Atlanta rally organizer Chris Hill, who said he has no intention of paying.

Other groups have been charged similar fees. Tim Franzen, who helped organize the March For Our Lives rally against gun violence in Atlanta on March 24, said organizers paid for statehouse security but he didn't recall how much.

The coalition behind the gun rights rallies describes itself as a collection of patriotic-based groups that "come from all walks of life, including Three Percent groups and local militias."

The Three Percent movement vows to resist any government that infringes on the U.S. Constitution. Its name refers to the belief that just 3 percent of colonists rose up to fight the British.

Clayton leads a group called the Three Percent Republic. Such groups lack the following of more mainstream Second Amendment advocates such as the National Rifle Association.

Jerry Henry, executive director of GeorgiaCarry.org, said a few of the group's 8,000 members have emailed him asking for details about the rally in Atlanta.

"We are not sponsoring it in any shape or form, but we're not opposing it," said Henry, who doesn't plan to attend.

Clayton said the organizers' goal is for attendance to reach 1 million nationwide.

Reeves and Gulya said they have no ties to militias or other such groups. Reeves owns a bolt-action rifle and a shotgun for hunting doves and squirrels near his home in rural Whynot, Mississippi. Gulya is a truck driver in Blue Hill, Maine, who likes shooting targets with handguns and rifles. He worries gun rights are slowly getting chipped away.

"As responsible, law-abiding gun owners, we seem to pay the price every time there's one of these tragedies," Gulya said. "We've stayed silent long enough."