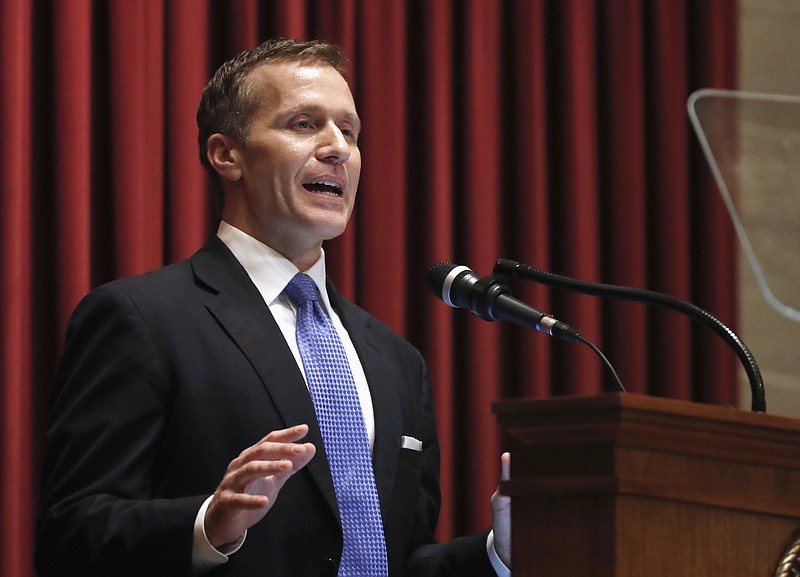 FILE - In this Jan. 10, 2018, file photo, Missouri Gov. Eric Greitens delivers the annual State of the State address to a joint session of the House and Senate in Jefferson City, Mo. Greitens appears to be bracing for a fight to preserve his political life after admitting to an extramarital affair but denying anything more. Greitens met Thursday, Jan. 11, 2018, with Cabinet members and placed calls to rally support while his attorney issued firm denials to a smattering of allegations related to the affair. (AP Photo/Jeff Roberson, File)

After hearing arguments for an hour, Cole County Circuit Judge Jon Beetem said Friday he'll consider Gov. Eric Greitens' lawyers' request to dismiss a lawsuit challenging the use of the Confide smartphone application that erases messages as soon as they're read.

St. Louis lawyer Mark Pedroli filed the suit Dec. 29, then amended it a month ago, accusing the governor and his staff of violating the state's Sunshine and open records laws by using the Confide application on their mobile phones.

But Bob Thompson, a Kansas City lawyer who took over the governor's defense in mid-March, argued that "each and every one of these (12) counts should be dismissed as a matter of law."

He said Pedroli and his clients, Ben Sansone and The Sunshine Project, already have been told that "the documents don't exist, were not retained and cannot be produced."

Thompson told Beetem: "There is no requirement to produce a record that doesn't exist - as a matter of law, it is not a record that is required to be produced."

But, Pedroli countered, "We have alleged they were documents that should not have been destroyed. They destroyed the records or attempted to destroy them."

Thompson reminded Beetem of the state Supreme Court's 1999 ruling in a Cole County case where KRCG-TV sought a videotape from then-Sheriff John Hemeyer that had recorded a state representative being booked on a drunk-driving charge.

That ruling, Thompson said, made it clear that the sheriff had to provide the tape only because it still existed and had not been recorded over.

"The ruling made it clear that, had it not been retained, it would not have been a record," he explained.

In addition, he said, Pedroli's case no longer is valid, since the governor's office's current policy "is that no one is to use the (Confide) software."

Thompson argued that part of Pedroli's case was based on Missouri's records retention law rather than on the Sunshine Law and, in that case, "The right to challenge lies with prosecuting attorneys or the attorney general - not with private citizens."

Pedroli told Beetem that was wrong.

"None of (the laws) say there isn't a private right of action," he argued.

He told the News Tribune after the hearing: "The Sunshine Law is clear. It clearly says that, when a public official destroys original public records, a resident of Missouri has a right to bring a claim. It's as clear as a bell."

Last month, Beetem set next Tuesday as the deadline for the two sides to produce their discovery - the legally required sharing of information with the other side.

Thompson on Friday asked Beetem to delay that deadline until after he rules on the motion to dismiss.

The judge said he would consider it - but didn't order any change in Tuesday's deadline.

He told reporters after the hearing: "You don't need to do all the work if the case is over with. And if the case isn't over with, discovery will go forward."

As usual, Beetem did not say how long it would take him to decide to dismiss or continue the case.