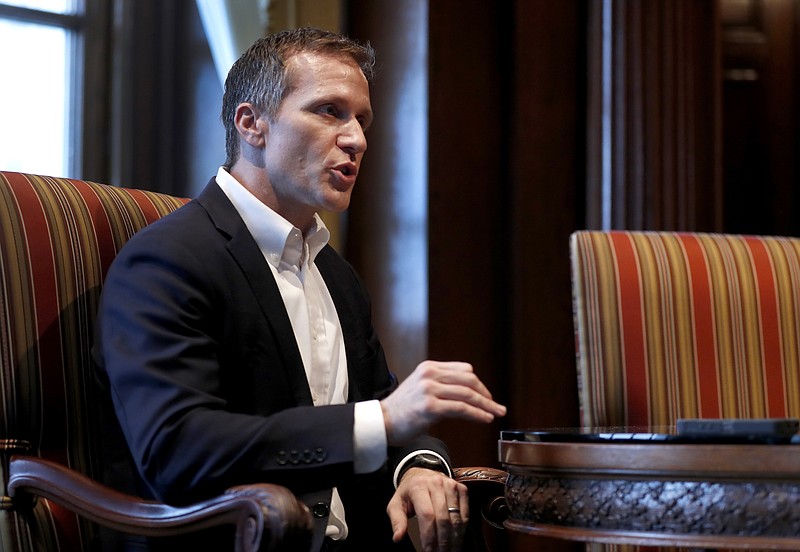 Missouri Gov. Eric Greitens speaks during an interview in his office at the Missouri Capitol Saturday, Jan. 20, 2018, in Jefferson City, Mo. Greitens discussed having an extramarital affair in 2015 before taking office. (AP Photo/Jeff Roberson)

Even though it's due no later than Monday, Gov. Eric Greitens' attorneys last week asked the Missouri House Special Investigative Committee on Oversight - which is investigating the governor's legal situation - to delay issuing its report until after Greitens' May 14 trial on a criminal invasion of privacy charge.

But when reporters asked Wednesday afternoon, following the committee's latest closed meeting, if the report would be delayed, Barnes said, "No."

In a March 26, three-page letter to the committee's seven members, the governor's lawyers said Chairman Jay Barnes, R-Jefferson City, had made two demands: "That we let him know by 5 p.m. today (March 26) whether the Governor will testify and 2) that if the Governor agrees to testify, he do so within two weeks."

The letter then said: "First and foremost, we wish to reiterate what we told the Chairman (Barnes) and Vice-Chairman (Don Phillips, R-Kimberling City) of the Committee when we met with them (earlier): Governor Greitens will cooperate fully with the work of this committee."

But, because of the scheduled May 14 jury trial, they said: "Rep. Barnes' second request, however, is unreasonable."

The letter was signed by lawyers Edward L. Dowd of St. Louis, Ross Garber of Washington, D.C., and Lucinda Luetkemeyer, the state-paid counsel to the governor, from Jefferson City.

Barnes told the News Tribune Wednesday morning: "The committee has given Gov. Greitens the opportunity to testify and remains open to receiving further information as it continues its work."

The March 1 resolution authorizing the committee's work gave it the power to issue subpoenas through the speaker's office. Barnes never has said whether subpoenas have been issued - and nothing in the lawyers' letter identifies that the committee asked to subpoena Greitens.

The panel has scheduled meetings every day this week.

Otherwise, he said, there was nothing new to report.

The lawyers' letter argued that restrictions imposed by St. Louis Circuit Judge Rex Burlison, who is presiding over the governor's May 14 jury trial, "on what information can and cannot be released make it impossible for the Governor to provide what the (House) Committee needs to complete its work. That includes discovery information from the (St. Louis) Circuit Attorney, transcripts of depositions of key witnesses, and other critical information that is not currently available to the Committee, by court order.

"That information will be available only after the criminal trial is concluded," the letter said, and also would include "evidence showing the Governor is innocent" of the criminal charges that he took a photograph of a woman with whom he was having an extramarital affair, without her permission and while she was at least partly nude.

Greitens has admitted to the March 2015 affair - which isn't a crime and which occurred before he launched his campaign for governor - but has denied any criminal wrongdoing.

Since the committee has the power to extend its own deadline, the letter said: "We see no compelling reason not to provide a brief extension of this Committee's work. Over 36 months have passed since the incidents being investigated by this Committee allegedly took place. Surely the committee can spare six additional weeks to get a full and complete accounting of what actually occurred."

The lawyers' letter also worried that the committee's releasing its report next week "will no doubt influence the jury pool and the public about this case."

The letter noted the May 14 trial "is expected to last only two or three days."

But the legislative session must end at 6 p.m. Friday, May 18 - leaving the House only a day or so to receive and act on the report, if the committee waited until after the trial to release it.

Although House Speaker Todd Richardson created the committee just days after a St. Louis grand jury indictment Feb. 22 that charged Greitens with felony invasion of privacy, the House resolution authorizing the panel's work said the panel would "investigate allegations against Governor Eric R. Greitens and report back to the House of Representatives."

The resolution, which passed by a 154-0 vote, did not limit the committee to investigating only the criminal allegations - and there are indications, although Barnes has confirmed none of them - that the committee also may be investigating allegations that Greitens misused for his governor's campaign a donor list from The Mission Continues, the charity he founded, in spite of laws against non-profit organizations using their donor lists for political purposes.

Attorney General Josh Hawley told reporters last month his office had given the committee information from the AG's ongoing Mission Continues probe, and from its separate review of the governor's office's use of the Confide smartphone application that erases messages once they have been read.

Some people have argued that using Confide violated the state's Sunshine and records retention laws.