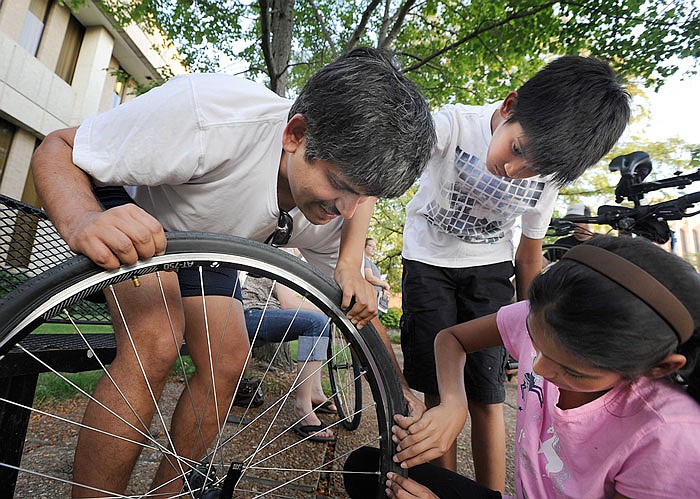 From left, Venkata Garikapaty and his ten-year-old twins, Arjun and Anagha, learn how to fix a flat tire Monday during the bicycle maintenance workshop at the Missouri Regional Library. The workshop was co-hosted by the library and Red Wheel Bike Shop.

Jefferson City may soon have a bike share program as more committees, commissions and boards discuss bicycle growth in the community.

During the Jefferson City Convention and Visitors Bureau's meeting Monday, the board of directors discussed sponsoring a bike-share program - in which people pick up bicycles at different self-serve stations around the city and return them to other bike stations.

Ashley Varner, healthy communities coordinator and wellness navigator at Capital Region Medical Center, said there is a committee working to create a bike-share program in the city to promote a bicycle-friendly community.

The committee, made up of city employees and community members, wants to subscribe with Zagster, a bike-share program provider. There would be 10 kiosks with 50 bikes total, and people would unlock the bikes by using a smartphone app. Varner said the committee still has to discuss locations for the kiosks.

Thirty bikes and stations would cost $54,000 through Zagster, Varner said in a packet sent to the CVB.

CVB Executive Director Diane Gillespie said the group is asking local entities to sponsor the program and pay $9,000 per year for a two-year trial period.

Varner said the group has talked to several potential sponsors who have shown interest in the program and is waiting to hear from them before moving forward with the bike-share program.

The $9,000 annual cost from sponsors would help pay for expenses like the kiosks, bikes, maintenance and marketing, Varner said.

"We really want to drum up support in the community, not only for funding, but also for interest in the bike share program," Varner said. "This is a community collaboration with the help of community partners."

While several board members showed interest in the program, they said they wanted to learn more about it, as well as talk to bicycle businesses that could be impacted, before voting on sponsoring it.

Members said they also wanted to see how the CVB's 2018 fiscal year budget looks and if the $9,000 a year would hurt its budget.

This is not the first discussion about creating a bike share program in Jefferson City. Last month, Varner said the newly resurrected Jefferson City bicycle subcommittee would discuss ways to implement a bike-share program.

A group containing members and employees from the city, the Bureau of Community Health and Wellness, the Jefferson City Police Department and the Capital Area Metropolitan Planning Organization applied for a national bicycle-friendly community designation in August.

To receive the BFC designation, a community has to earn a certain number of points, awarded for different things the city does to promote cycling, one of them a bike share program. The points translate into ranks: bronze, silver, gold, platinum and diamond.