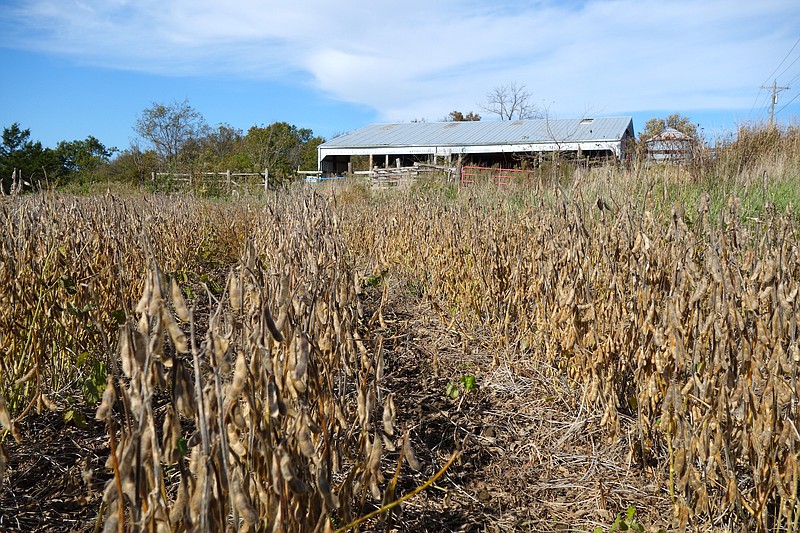 As soybean fields turn brown and harvest approaches, Missouri farmers are waiting to see whether this summer's struggles with dicamba drift have hurt their bottom line.

Between Jan. 1-Sept. 28, the Missouri Department of Agriculture received 310 complaints of damage related to the herbicide ingredient dicamba from farmers across the state. That includes five-14 complaints from Callaway County farmers.

"I think it's been impacting a lot of folks," Rusty Lee, agronomy specialist with the University of Missouri Extension, said.

To promote proper use of dicamba products, MU will soon begin offering training in using herbicides containing the substance, according to a release. Starting this December, the MU College of Agriculture, Food and Natural Resources and MU Extension, in cooperation with the Missouri Department of Agriculture, will offer web-based and in-person training for those wishing to use or purchase dicamba in 2018.

For more information about the classes, visit extension.missouri.edu/main/spotlight/dicamba.

In 2016, most complaints came from the Bootheel region, but this year, they increased from 130 to 303 and spanned more than 50 counties, according to a MU College of Agriculture spokesperson. Crop damage from dicamba grew to more than 325,000 of the state's 6 million acres of soybeans.

While soybeans are suffering the most damage, damage to peaches, watermelon, tomatoes, grapes and other crops has also been reported.

Herbicides containing dicamba have been in use for about 50 years.

"It's been used in corn for a lot of years," Kingdom City farmer Fred Atkinson said.

In 2015, Monsanto received USDA approval to sell its Roundup Ready 2 Xtend soybeans, which have been engineered to resist herbicides containing dicamba - including Monsanto's own XtendiMax herbicide.

This appealed to farmers because of the crop-strangling scourge of glyphosate-resistant waterhemp, also known as pigweed.

"Each plant produces thousands of seeds," Atkinson said. "If a few of them survive spraying, they grow up resistant to (the weedkiller)."

Then they take over fields.

However, he added, farmers have found dicamba to be highly effective at killing waterhemp. Monsanto claimed about 20 million acres of Roundup Ready 2 Xtend soybeans were planted in 2017.

This year, the Environmental Protection Agency and the Missouri Department of Agriculture approved dicamba-containing herbicides including DuPont's FeXapan, BASF's Engenia and Monsanto's XtendiMax for use with dicamba-tolerant soybeans and cotton.

Dicamba particles from one field can reach neighboring fields. A report from the University of Wisconsin stated drift can happen while spraying, if the wind is too strong or the particles sprayed are too small.

After application, dicamba can evaporate back into the air. This tends to happen if it's applied in hot, dry conditions, the report stated.

The report describes symptoms like leaf puckering, split stems and - if exposure occurs when soybean pods are growing - damaged pods.

"If it catches (soybeans) at the wrong stage, it could do major damage to a person's farm," Atkinson said.

Levels of exposure as low as 945 parts per billion can cause minor damage, the report stated.

In October, Monsanto claimed its new dicamba formulation "reduces volatility potential by 90 percent compared to older dicamba formulations." The company said it had been tested for volatility and off-target movement before release. It also said after investigating more than 1,200 customer reports of leaf cupping, "we have not seen any evidence that volatility of our dicamba product is the issue."

As the summer progressed, complaints from farmers with damaged crops rolled in. The DoA stated "investigations of 2017 complaints are ongoing and therefore information regarding them cannot be disclosed," meaning it's not yet clear how much of the reported damage was caused by dicamba drift or under what circumstances the damage occurred.

On July 7, the DoA issued a stop sale, use or removal order on all dicamba-containing agricultural products.

"We want to protect farmers and their livelihoods. At the same time, my commitment to technology and innovation in agriculture is unwavering," Director of Agriculture Chris Chinn said at the time. "That's why I am asking the makers of these approved post-emergent products, researchers and farmers to work with us to determine how we can allow applications to resume this growing season, under certain agreed upon conditions."

On Sept. 29, the DoA lifted the order on certain products.

"The products made available by this Notice of Release issued Sept. 29 are predominantly used for post-harvest burn down or pasture management, which is what farmers are preparing for now," a DoA spokesperson said Wednesday. "Since harvest is underway, it is unlikely that producers/applicators would make any Dicamba applications to soybeans or cotton this late in the season."

On Oct. 13, the EPA announced a new agreement with Monsanto, BASF and DuPont about restrictions on dicamba use on soybean and cotton crops. Beginning in 2018, manufacturers will modify product labels to include a number of new requirements.

For example, applications will be limited to certain times of day and only when maximum wind speeds are under 10 miles per hour. Also, these products will be classified as "restricted use," so only certified, specially trained applicators will be allowed to apply them.

According to Monsanto and MU officials, the best way to prevent dicamba products from damaging neighboring crops is to follow the label and take precautions during application.