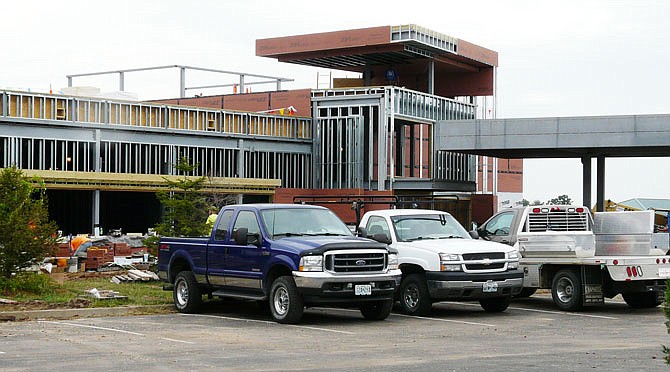 Construction continues on the new Health Sciences building at State Technical College in Linn. It is expected to be open in the fall of 2018.

The state-owned technical school on Friday received a $50,000 donation from Missouri One Call to help build what's described as "a real world cityscape of about two city blocks, complete with buried utilities, water, sewer and telecommunications."

The area is intended to be "a state-of-the-art training facility" for State Tech students and Missouri One Call employees.

"Safety Village is the beginning of what we think will become the Center for Utility Technicians," State Tech President Shawn Strong told the News Tribune after receiving the donation. "Ultimately, all of our utility programs will be centrally located in that facility."

As it's envisioned, Safety Village will have six mini-lots, with homes or other buildings, over underground utility lines.

Even though it will be operating when school starts next fall, Strong said there's a lot of planning still to be done.

"We're going to start working on, what are the exact materials we need," he told a group of State Tech employees and industry supporters who visited the open field where Safety Village will be built Friday. "What are the utilities actually going to look like?"

He said they likely also will plant trees and place other "obstacles" on the sites to represent the "real world" issues a utility locater will face.

"We're going to look at, 'Do we put in sidewalks?'" Strong said. "'Do we put in paved areas? Is it all going to be gravel?' A lot of it is a real-life simulation of what you're going to find out there."

State law requires contractors, homeowners and other property owners to determine where underground utility services cross a property before any digging or excavation work is done.

The law defines excavation as "any operation in which earth, rock or other material in or on the ground is moved, removed or otherwise displaced by means of any tools, equipment or explosives and includes, without limitation, backfilling, grading, trenching, digging, ditching, pulling material from a ditch drilling, well-drilling, augering, boring, tunneling, scraping, cable or pipe plowing, plowing-in, pulling-in, ripping, driving, and demolition of structures."

Missouri One Call serves as a clearinghouse for those requests to find utility services, taking a customer's or contractor's location request and notifying the affected utilities so they can mark the property for the existence of any underground services.

John Lansford, a Linn native who now serves as Missouri One Call's executive director, said the industry needs the training Safety Village and the proposed Utility Technicians program will provide.

"To really be a good locater, you have to know the theory of locating," he explained. "And then you can use any piece of equipment to make it work. That's what we're trying to get here at State Tech, is the concept of actually having a theory - and they will be partially certified to be a locater through NULCA, the National Utility Locating Contractors Association."

But shouldn't the utilities already know where their underground services are buried, making such a training program unnecessary?

"I hear this every day," Lansford said, noting the utility companies do have an idea where the line is when it's installed.

"(But) 20 years later, with erosion or whatever else has happened, they have no idea how deep it is."

Lansford said he once worked for an electric utility and watched as a line was placed 4 feet into the ground.

"Five years later, it was 8 feet deep," he recalled, "because it went through a gully, a guy filled it in, and we didn't know it until we went back out there. So you don't know what you're going to get; it changes."

Another complication is the ground where an underground line is buried.

"We're blessed in the state of Missouri to have almost every type of soil in the nation," Lansford said. "And they all act differently if they're wet or dry. And they all have different types of rock."

Locating an underground line "is not as easy as it looks," Lansford said. "It's part science and part art."

More information about Missouri One Call's services can be found at mo1call.com.

He said technological changes in the kinds of lines or pipes laid underground shouldn't make a difference in finding them.

"If a locater is good - if he's got the basic knowledge - he will be able to figure it out," Sellenriek said. "The locating equipment's so advanced that you've got to be technical to run it."

That's the kind of training he trusts State Tech to offer.

He added: "Manpower is a shortage for everybody. You can buy equipment or rent equipment, but you've got to have the people" to operate it.