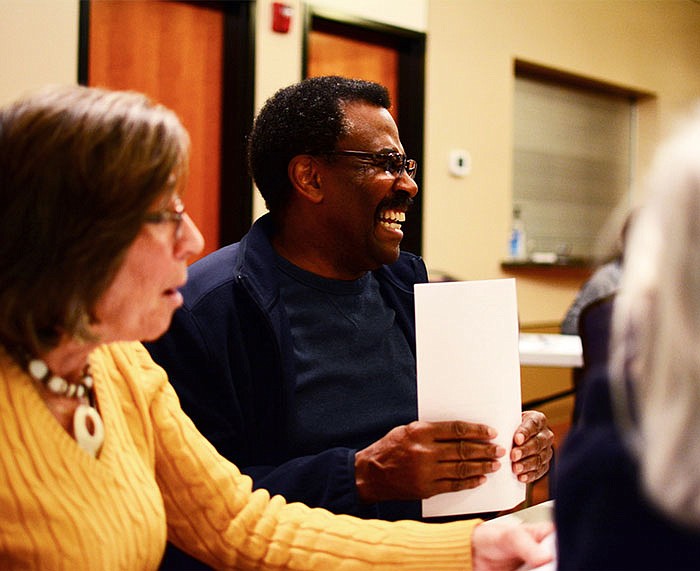 W.T. Edmonson, middle, laughs while speaking with others Monday during a Faith Voices meeting at Quinn Chapel AME Church.

The Jefferson City community has been facing the complex topics of diversity and racism for several months, and we've been reporting on those discussions as they happen. Today's story focuses on the efforts of local faith leaders to identify goals and action steps to heal racial issues they see in the community. We've also heard from city leaders, school district officials, teachers, concerned parents and Jefferson City Public Schools alumni. For a look at all of the voices who have contributed to this discussion, view additional coverage at newstribune.com/diversity.

A leader's last meeting Monday night was only the beginning of a group's work to develop plans to transform the Jefferson City community.

Rev. Michelle Scott-Huffman took a final bow Monday night as a leader of Faith Voices for Jefferson City, but Scott-Huffman said the group's work is already "further than most (local) folks have gotten so far."

Faith Voices for Jefferson City met to further develop plans to address community issues they've identified, with most of the issues directly-focused around race.

At the group's last meeting in October, Faith Voices identified five central issues they wanted to work on:

Monday's meeting was about "rolling up our sleeves and getting to work" by putting some flesh on the bare-bones ideas from last time, Scott-Huffman said.

In other words, the group met to develop concerete action steps, timelines and to identify leaders.

"That excites me," Scott-Huffman said, because she said the Faith Voices organization is about developing leaders, who will carry on work on the named issues outside of Faith Voices' future group meeting times.

Scott-Huffman - who is also Pastor at Table of Grace in Jefferson City - is president of Faith Voices, and said she has been involved with the group since 2013.

A campus ministry position at Missouri State University is her next calling, but she is excited seeing Faith Voices form actionable steps to address "this racial justice issue at the center of everything we do," particularly after Michael Brown's death in Ferguson in 2014.

Specifically, the school district liaison and discipline subgroup that's been formed wants to suggest Jefferson City Public Schools create an appeals process for students who have had discipline issues, look into incorporating trauma-informed and aware discipline training for faculty and look into what Thorpe Gordon Elementary and other schools in Missouri might be doing well in terms of discipline policies and practices.

The neighborhood issue subgroup also wants to look into organizing informal, inexpensive outdoor social gatherings in the spring or summer for people in neighborhoods to connect and discuss any local issues they may be experiencing.

As the various subgroups' work takes shape over the coming weeks and months, Scott-Huffman said there will not be a next president for Faith Voices of Jefferson City to replace her. That's because the group has been a 501(c)3 nonprofit, separate from the larger Missouri Faith Voices statewide organization.

In the current process of re-aligining the Jefferson City group's governance to match the state organization's structure, "co-conveners" of meetings will take the place of a president, she said.

How do you think Jefferson City should work to address concerns about diversity and racism? Share your ideas and experiences using the form below, or email reporter Phillip Sitter at [email protected]