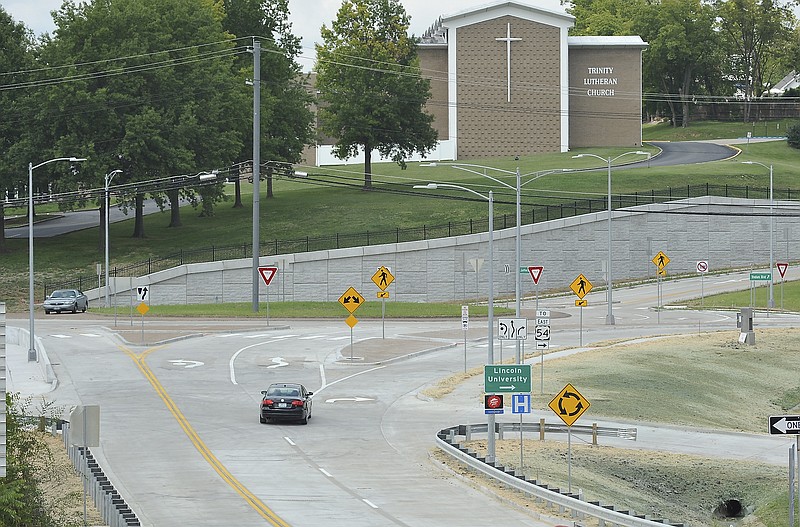 Julie Smith/News Tribune The roundabout at Jefferson and Stadium is now completely open, including the southbound and northbound Jefferson Street, south of the intersection. The bypass lane north on Jefferson to turn onto eastbound Stadium Boulevard will save those drivers from having to go through the roundabout.

After opening its most recent roundabout at Jefferson Street and Stadium Boulevard, Jefferson City is considering other intersections to improve with roundabouts.

Jefferson City and Missouri Department of Transportation staff said roundabouts usually are the safest options when improving intersections due to their low speeds and geometry.

The Tanner Bridge Road/Ellis Boulevard intersection experienced the second-highest number of wrecks, with eight since January 2013. The roundabout opened in August 2010.

There has not been an accident at the Stoneridge Parkway/Hard Rock Drive roundabout since it opened in July 2015.

City Engineer David Bange said before most of these roundabouts were placed at intersections, many were "problem intersections" because of the high risk of car wrecks.

The police department started using its Law Enforcement Traffic System in 2013, so the earliest data available is from 2013, Lt. Patrick McCutchen said.

Bange said roundabouts are a key factor in helping traffic flow. At a signalized intersection, though, cars will idle at a light until the light changes, while a roundabout allows cars to move continuously. Vehicles have to yield to oncoming cars in a roundabout but then can enter it, making traffic flow more efficient.

Along with providing efficiency, the geometry of the roundabout decreases the likelihood of accidents. At a typical four-way signalized intersection, there are 32 conflict points, while a roundabout has eight, according to the U.S. Department of Transportation Federal Highway Administration. That's because roundabouts do not have crossing conflict points, while signalized intersections have 16 points where vehicle paths cross.

"At a typical intersection, you have cars wanting to make rights, cars wanting to make lefts, cars wanting to go through. If you add up all those different possibilities at each leg, there's a lot of points of conflict that could exist as those cars interact with each other," Bange said. "At a roundabout, those things are really reduced because basically everyone is making a right-hand turn into the roundabout, so you eliminate that through and left-hand turn conflicts. So all those possibilities of conflict and accidents or crashes are greatly reduced."

These conflict points were clear at the two crossovers at the intersection of East McCarty Street and U.S. 50. According to Missouri Department of Transportation crash reports, there were 72 accidents at the crossovers between 2001-07. Of those wrecks, two were fatal, two resulted in disabling injuries and 21 involved minor injuries.

After the two roundabouts opened in 2009, there were five wrecks between both roundabouts from 2010-16. The wrecks involved only property damage.

Even though traffic only has to yield at roundabouts, the slow speeds decrease the likelihood of accidents, Bange said. Roundabout speed limits normally are about 15 miles per hour.

Roundabouts reduce traffic by about 75 percent since the speed is slower and traffic can move continuously in a counterclockwise direction, according to information on MoDOT's website.

Most accidents that occur at roundabouts are sideswipes or single-car accidents, Bange said. These are less severe compared to the most common accidents - T-bones and rear-ends - at signalized intersections.

"At a red light or a signalized intersection, typically the roads are crossing each other at 90-degree angles or somewhere close to that," Bange said. "In the instance that someone isn't paying attention and runs through a red light, their speed could be relatively high, so an accident that would happen with that person running into the side of someone else who has a green light and is moving through the intersection, that crash is rather severe because the person who ran the red light may be moving at a high speed."

Bange said many people worry they have a higher chance of being in a wreck if they cannot see across the roundabout. When the city placed a sculpture at the Jefferson Street/Stadium Boulevard roundabout, he said, staff received several calls from concerned residents.

However, the sculpture is meant to help improve the roundabout's efficiency by focusing drivers' attention and keeping them from yielding unnecessarily.

"Having something in the center forces me to pay attention to the cars that I need to be paying attention to. I'm not distracted by something that's really unimportant in that situation," Bange said. "If I'm entering the roundabout, I need to see if someone is in the circulation; and the other person I need to see is the person who might be coming in on the lane immediately to my left. Everyone else, because of the speeds that everyone is going, isn't going to affect me. If there's someone coming from the opposite leg on the other side of the roundabout, there isn't any way they're going to get to me before I would have already pulled into the roundabout and would have been part of the circulating traffic."

Jefferson Street/Stadium Boulevard was the first intersection where the city replaced a signalized light with a roundabout.

"Signals may have the initial lower cost, but you have to think, 'Well, someone has to go out there and maintain the equipment,'" Depue said. "We have signal technicians and engineers that have to look at timing. We have technicians that maintain equipment when a lightning strike takes out a signal. There's a lot of hardware that goes into making that signal work, and a lightning strike could easily take out several signals. On top of that, things wear out over time and you have to replace equipment."

Jefferson City is looking at intersections to implement new roundabouts, such as along the West Edgewood corridor between Stadium Boulevard and Missouri 179, Bange said.

The city also is considering a roundabout at Myrtle Avenue and Stadium Boulevard.

In July, the Jefferson City Planning and Zoning Commission added the Historic Southside/Old Munichburg Plan to the city's Comprehensive Plan, and one of the plan's final goals is to redesign the Stadium Boulevard/U.S. 54 intersection using three roundabouts to re-route traffic. Madison Street would be disconnected from U.S. 54, and drivers would access Madison Street from Stadium Boulevard.

The plan calls for these major traffic changes within 20 years or so.

MoDOT usually considers roundabouts first when trying to improve an intersection, but it depends on the size of the intersection, the volume of traffic and lay of the land, Depue said.

There are times when a roundabout is not the right option - normally if the traffic volume or cost is too high, he added.

Both roundabouts opened to traffic in May 2010, and there were eight wrecks between the two between January 2013 and Nov. 1, 2017, according to police crash reports.

There was not a traffic-control mechanism there originally, and the intersections did not experience problems at the time the roundabouts were constructed. However, Bange said, the city constructed these roundabouts in preparation for development and increased traffic near Menards, Sam's Club and Kohl's.