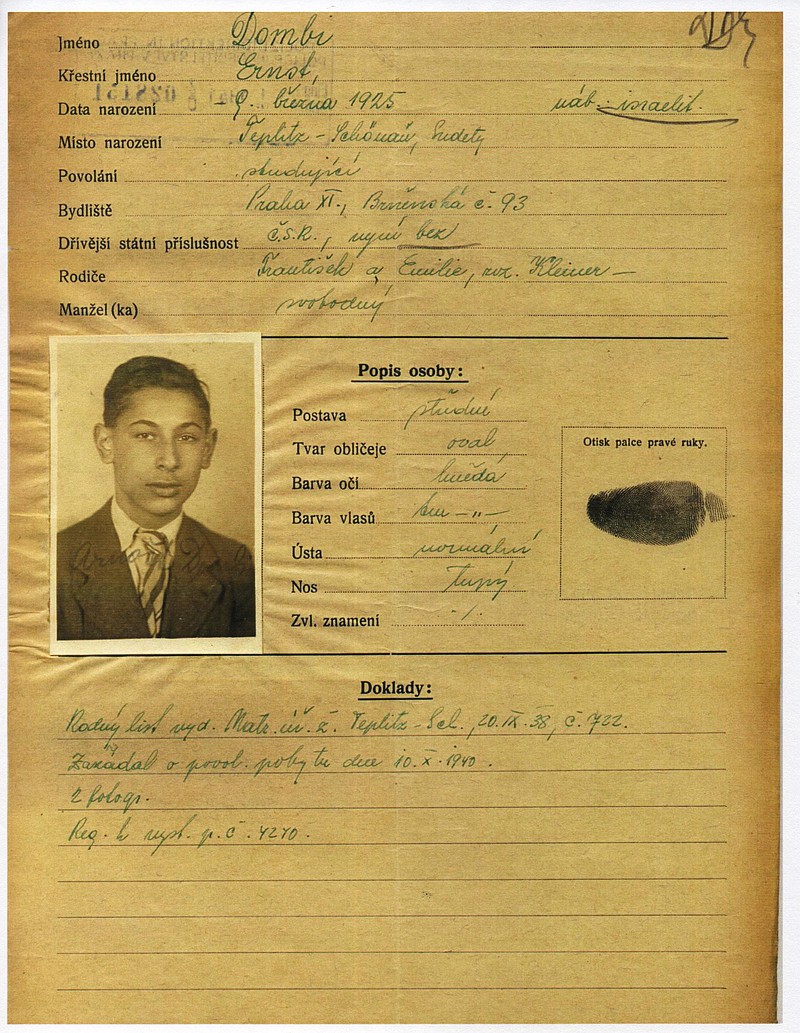 A copy of the papers Ernest Dombi had to keep with him while imprisoned in the Terezin concentration camp.

Swirling white clouds followed Katherine Kral as she rode to the Terezin concentration camp, as if the spirits of her Jewish ancestors were urging her onward. This was her second trip to the Czech Republic in as many years, but the first she'd walked in the footsteps of the relatives her great-grandmother left behind when she immigrated to America, just before the Holocaust began.

She viewed lines of sinks inside the fortress town's spartan stone buildings and fantasized of her deceased cousin Ernest Dombi, once a touring Gypsy band member, hurrying about fixing mechanical malfunctions in Nazi factories. The old family story said Kral's great-aunt Emilie Dombi survived by eating some of the noodles she made in one of those factories. Other members never left the camp.

"I could feel the weight of the world on me," Kral said. "It was a sad, sad feeling (in Terezin)."

Despite the sense of despair that lingered in the old structures, Kral came to affirm the old adage: Through darkness comes the light.

Kral wouldn't be where she is today - a Jefferson City grandmother and Missouri Highway Patrol criminal intelligence analyst - if her great-grandmother Albine Kleiner hadn't avoided the Nazis' grip by sheer happenstance. Before Jews were rounded up throughout Europe, Kleiner already had moved from her hometown of Turnov to St. Louis, where she met a man and went on to raise a family.

Kral began her genealogy journey many years ago to feel more connected with her family. Her parents died in a car crash when she was 19 years old, and her grandparents passed away soon after. In mourning their loss, she realized no one left in the family knew much about the past of her father's parents, Stephen and Eva Kral, who moved to Missouri from Cicero, Illinois.

Relatives sent her boxes of old records to rediscover their story. Wills, immigration documents and other paperwork shed a little light on the family's history and a dark past from Eva's Jewish side of the family.

"I've lost my parents and my grandparents, and who else is there to tell those stories?" Kral said. "I'm trying to tell their story" to pass on to younger relatives. "To me, it's very important that everyone know their heritage and where they are from. It makes me feel warm and close to my family."

Years passed, but Kral still craved more information. In her search for additional documents, she ended up making vacation plans as well.

"I reached out to the genealogy society in Chicago, and I told (a representative), 'Yeah, someday I would love to go to the Czech Republic,' and she told me about this group that was about to go."

Kral was soon connected with the T.G. Masaryk Czech School, which conveniently was heading across the Atlantic in 2015 and invited Kral along.

"There was like 28 of us, and I was about the youngest," she said. "The average age was about 77 years old, but it was great. They were so nice."

The group visited tourist hot spots, but Kral didn't get the chance to see where family members once lived. Fortunately, it just so happened the T.G. Masaryk Czech School was going to her family's hometown of Turnov in 2017. She also got a partner in family genealogy after another relative, second-cousin Carol Wimmer, got involved. The duo set out Sept. 9 on a 12-day journey to discover their Central European roots.

In Turnov, officials ceremoniously greeted the Americans as a group, but when Kral showed them her family records, everything changed. It turns out Kral provided the conclusion to a local ghost story.

"Someone from the library came over, and I could tell by their voice that they were really excited," Kral said. "That's when they told me, 'There is a villa here that was the Epsteins'.' My great-great-grandmother's maiden name was Epstein. When the Holocaust happened, (everyone thought that none of the family survived) who were living in this villa, and they said 'a lot of the people think it is cursed and nobody wants to live in this house, but this might be your family's.' That's when everybody started getting really excited."

The supposedly cursed house had become an art gallery, and Kral was able to view it when not giving interviews to local journalists and exchanging pleasantries with the town's vice mayors. She quickly realized she had inadvertently become a foreign celebrity, representing a happy ending to the city's haunted house story.

Later in the Turnov visit, Kral visited the concentration camp. Even there, she found an inspiring symbol of renewal within the dark history. As she walked out of the camp, she noticed a beautifully fertile pear tree growing from a mound of green grass. She wanted to pick a pear, but someone warned her the tree grew on a mass burial site. The roots may extend to where some of her relatives might have been buried, like her cousin Viktor.

"There's this beautiful tree, and it was just so sad," Kral said. However, as something beautiful can grow on the remains of an awful past, so too can a family carry on in the wake of the Holocaust. Ernst and Emilie Dombi survived the Holocaust and eventually visited their family in America, though Kral said the mental scars of the Holocaust forever pained Ernest.

Kral's trip ended on a pleasant note, after leaving the homeland of her grandmother's family to visit her grandfather's relative, Vlasta Kral, who lives in a small village of Kvasov, Slovakia. The 70-year-old Vlasta took the visiting cousins to the village cemetery. Like the beautiful pear tree, the cemetery was bright and full of flowering plants. The dead were celebrated more than mourned in the small village, and as Kral thought about all this, she said she heard the clatter of bells. A shepherd was crossing his sheep across the nearby road - like in the times of old when Kral's grandfather was just a boy - a living, bleating symbol of renewal.

"Even when I was in Turnov, where the Jewish side of my family is from, it was such a sad trip, but the people were so nice and grateful that I came," Kral said. "To me, it goes along with that pear tree. It was so symbolic, and there was so much death and the Nazis killed all these Jewish people. But here is this beautiful pear tree, and it was packed full of pears on the green grass."

Kral currently is planning a trip to Prague to visit Vlasta Kral's sister-in-law - and just might bring some of her other American relatives along this time.

"I'm hoping that my grandchildren and even my nieces and nephews will find this interesting and that I can pass this on."