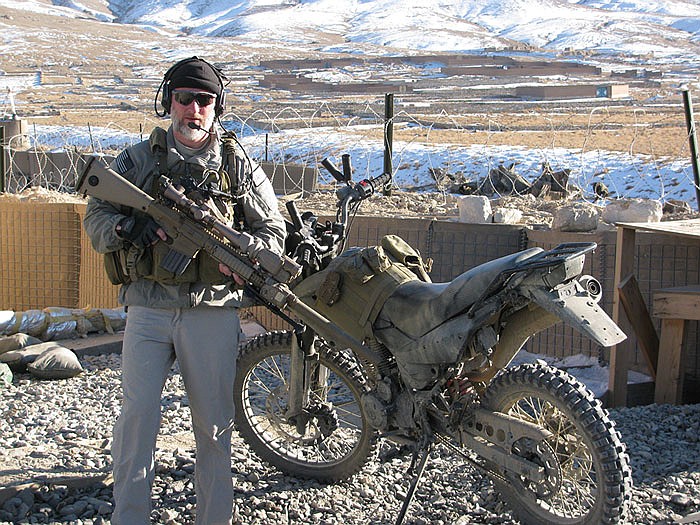 Shawn Satterfield is shown in Afghanistan in 2009, when he served as a company commander with the 20th Special Forces Group.

Throughout the decades, many young people in pursuit of achieving their career goals have used the U.S. military as a springboard of opportunity. Such seems to be the case with Shawn Satterfield, who chose to enlist in the Missouri Army National Guard while still a junior at St. James High School in 1986.

Completing basic training at Fort Jackson, South Carolina, the summer before starting his senior year, Satterfield graduated in 1987 and went on to complete his advanced training as a military policeman at Fort McClellan, Alabama.

"I always knew that I someday wanted to be a state trooper," Satterfield said, "and I thought that by taking the MP training, it would someday help me to achieve that end."

After returning from his initial training, the young National Guardsman embarked upon a part-time military career by beginning a cycle of service consisting of weekend drills and annual trainings with his unit in the community of St. Clair. He also decided to pursue his education by enrolling at Southeast Missouri State University.

"In addition to my goal of becoming a trooper, I had also planned to go on to college," he said with a grin. "I had done enough manual labor on the farm that I knew that's not what I wanted to do all of my life."

While in college, Satterfield participated in the Reserve Officer Training Corps Program. Prior to his graduation with a bachelor's degree in criminal justice in late summer 1991, he earned his commission as a second lieutenant in the infantry. He was then assigned to the Army Reserve since the Missouri National Guard did not have any infantry units at that time.

The young officer was soon able to acquire an officer's slot with a Special Forces company in Kansas City; and after undergoing the Special Forces Assessment Selection, he completed a year of Special Forces training at Fort Bragg, North Carolina.

"During the training, we were given a familiarization with all Special Forces military occupational specialties, the military decision-making process and completed the Special Forces qualification course," he said. "It also consisted of a six-month language school during which I learned Egyptian Arabic."

Graduating from the training in 1993, he later transferred to the 20th Special Forces Group in Chicago when his unit in Kansas City was deactivated. He then went on to serve many years with his unit in Chicago and continued his part-time military career by participating in deployments to Honduras, Panama and Bolivia.

During the same timeframe, Satterfield pursued his full-time interest in law enforcement by completing the Missouri Highway Patrol Academy in 1995, starting his new career as a road officer in Crawford County.

In the ensuing years, he would work undercover, become an narcotics investigator and later serve as a drug task force commander.

Since 2011, he has served in his full-time capacity as the assistant director for the criminal division with the Missouri Highway Patrol.

His parallel Highway Patrol and military careers continued when he transferred to Company C, 2nd Battalion, 20th Special Forces with the Mississippi Army National Guard in 2000. Throughout the next several years, he rose through the ranks in several different assignments, eventually receiving promotion to major in 2005 while assigned to a special operations detachment at Homestead Air Force Base in Florida.

"I served as a special operations officer between 2005 and 2008 and participated in several short tours, including tours into Colombia during Operation Willing Spirit," Satterfield said. The operation was part of a successful mission that rescued and repatriated three Americans held hostage by a communist guerilla group.

As the years passed, he completed deployments to Afghanistan and Central America. In 2012, he was promoted to the rank of lieutenant colonel. In 2014, he deployed to the Middle East as part of the Joint Special Operations Task Force "to help blunt the ISIS offensive against Baghdad and protect U.S. strategic interests in Iraq," he said.

Satterfield graduated with a master's degree in strategic studies from the Army War College in 2015 and the following year assumed command of the Special Operations Detachment-Central located at MacDill Air Force Base in Florida, with which he continues to serve in the rank of colonel.

This past April, he marked 31 years of military service. During his military career, he has served as a commander at every level in Army Special Forces - captain through colonel - in addition to six deployments in the Global War on Terrorism.

"When I first enlisted in the Missouri National Guard, I wanted to stay in the state and thought that was a good opportunity to serve and remain in Missouri," Satterfield grinned while explaining the subsequent military career that has taken him all over the world.

Even after three decades of military service, he affirms the years have by no means diminished his overwhelming desire to continue to serve his nation in military uniform.

"As long as I am physically able to do so, I will continue to serve," Satterfield said. "I've come to the realization that I must really enjoy it all to have stayed this long," he said.

He further explained, "I certainly recommend military service as it is probably the best education a person can get; they get to see other cultures, societies, forms of government - all of which creates a basis of perspective you cannot get from staying in your home area."

With a pause, he added, "I was able to earn a master's degree while I was in the service but I truly believe the exposure to other cultures is the best real-world education a person can receive above a formal education."