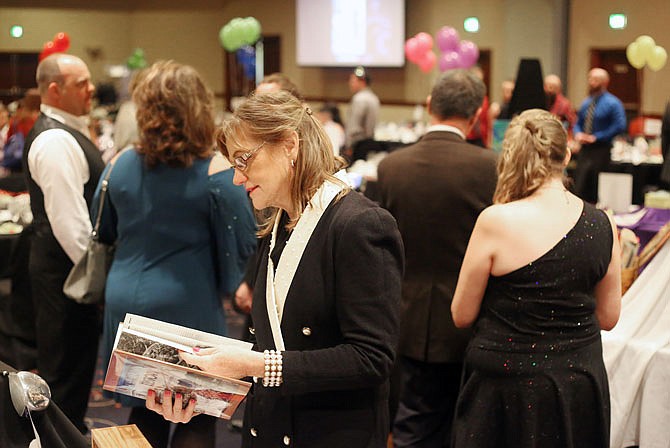 "We're going to unveil and work with all of you to push an aggressive agenda," Greitens told several hundred people Thursday at the Central Missouri Foster Care and Adoption Association's ninth annual Forget Me Not Gala.

"We need, for example, to make the reimbursement and voucher process for foster families faster and more flexible," Greitens said. "We also want to make this the best state in the country for families who want to adopt - and give children a permanent and loving home."

He noted lawmakers this year passed a "Foster Care Bill of Rights," and his administration has removed the usual costs for getting birth certificates for foster children.

First lady Sheena Greitens had been scheduled to be the gala's "welcome" speaker, but a change in family plans had the governor filling in for her.

"As you know, Sheena has spent a lot of time working on foster care," he said. "This is really important to her" and has been since her parents adopted her little sister when Sheena was in the third grade.

The governor also recalled the work with refugees he'd done overseas, telling of a 16-year-old Rwandan boy in a refugee camp in Zaire, who described every one of his 14 parentless, teenage companions as being "powerful" with one skill or another.

"Every single person around us has something to offer, some wisdom we don't have, some courage that we could benefit from," Greitens said.

Elizabeth Hunter was the evening's keynote speaker, telling those attending the gala they were her heroes because they support efforts to improve foster care and adoption opportunities.

She added: "Foster care and adoption saved my life."

"Tonight you will not leave guessing or suspecting whether the ways you give back make a difference in the life of another human being," she told the gala audience.

"You will know, beyond a shadow of a doubt, that lives can be changed."

Hunter showed pictures of herself and her brothers as children - children who tried to help their mother when she was beaten by their father and sometimes locked in a room by him, but who also witnessed their mother's drug addictions and often cried "over how hungry we were while we watched her shoot-up our last little bit of money."

Hunter's mother eventually left their abusive father only to get into a worse relationship that produced two more babies, who were neglected even more than she and her older brother had been.

"The only time my little brother was ever held or worked with was when I - a little girl of only 6-8 years old - could figure out what to do for him," she recalled. "And that was not nearly often enough."

She still feels guilty she didn't do a better job of caring for those siblings.

Eventually, Hunter spent seven years in the foster care system and acknowledged the system has problems.

But she praised the social workers and foster parents who try to give children some sense of a childhood, of joy and youth and innocence.

Hunter was adopted when she was 15, gaining enough self-confidence to graduate as her high school valedictorian and earn a college degree with the highest honors while specializing in psychology, sociology, criminal justice and social work.

She married her high school sweetheart 15 years ago, and they have four children, including two adopted from the foster system.

"When you give," Hunter said, "there is another sweet, little, innocent face - just like my brothers and myself - receiving (that gift) and being changed by it."