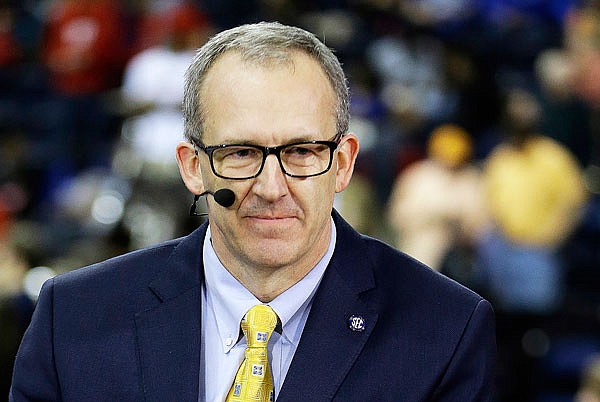 In this March 12, 2015, file photo, Greg Sankey speaks with the SEC Network before an Southeastern Conference basketball tournament game in Nashville, Tenn.

BIRMINGHAM, Ala. - Southeastern Conference commissioner Greg Sankey has been on the losing end of the argument against an early football signing period.

He joins some of the league's coaches who don't think it's a change for the better.

The new recruiting rules will be among the topics for coaches and administrators at spring meetings next week in Destin, Fla. Other issues include collaborative instant replay in men's basketball and graduate transfer policies.

If Sankey wasn't alone among conference commissioners and others opposing the new December signing period, he understood quickly that he was in the minority.

"I'm not a singular voice," Sankey said recently. "I've probably been more specific with my concerns. There are very vocal advocates. I knew my first meeting as commissioner that the majority of conferences in the Football Bowl Subdivision wanted to see an early signing day.

SEC coaches like Alabama's Nick Saban and LSU's Ed Orgeron expressed concerns about the early signing period (Dec. 20-22 this year). Others had reservations about the change allowing early visits.

Now high school juniors can take official visits from April through June. FBS schools face a two-year waiting period before they can hire people close to recruits to non-coaching positions.

Sankey readily lists some of his issues with having high school players able to sign in December. He wrote an analysis on the subject in 2006.

He believes it furthers the gap between athletes and other students in how early some will make their college decisions. They'll also potentially have that signing period looming while their high school teams are still in the playoffs.

"Whether it's a minority voice or a singular voice, I think those are important issues to consider."

He also said with some teams playing in December bowls and conference championship games, it limits time for in-person contacts before the signing. Sankey said it stands "in contrast to the universal long-term message about wanting to get to know student-athletes better before making what is almost a four-year commitment to them."

While the recruiting reforms have dominated the headlines, here are some other topics Sankey expects at the spring meetings:

That would take the place of officials huddling around a small TV monitor at courtside.

"It just doesn't seem the healthiest way," Sankey said. "There's a replay, they stop, walk over. Can they move that along more quickly? Can they identify the correct outcome in a more efficient way?"

The SEC has brought in athletic directors and others to try to make quick review decisions of non-league football games during the offseason to give them a better idea of the challenges.

Sankey said talk about graduate transfer policies will come from outside and within the league. Last season, Alabama defensive back Maurice Smith wanted to transfer to Georgia. He was ultimately released from his scholarship in August and granted a waiver from the SEC.

The SEC has mostly required players transferring into the league to have two years of eligibility remaining, with some exceptions like Florida basketball player Canyon Barry.

Sankey believes the SEC can find a way to allow more graduate transfers and barring a team from signing another one for a period of time if a transfer doesn't complete their academic requirements.

"A football player that enrolls as a graduate student and never goes to class, that's not healthy," Sankey said. "We want to tend more toward our Canyon Barrys."