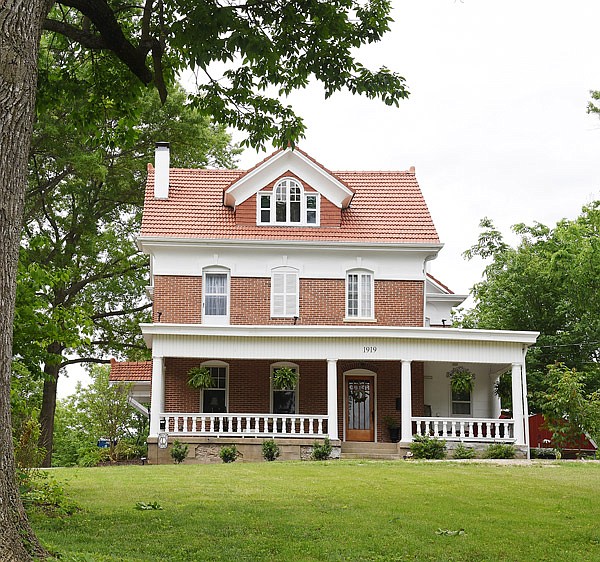 The residence at 1919 W. Main St. has undergone remodeling and has been named the Jefferson City Landmark Award winner for May 2017.

Once part of an 80-acre orchard well outside the western city limits, 1919 W. Main St. remains a standing tribute to the Dix Road namesake.

The three-story home was designated a Jefferson City Landmark this month.

Although the Dix family would call it home for decades, the property originally was built for James Babbitt, a U.S. commissioner of land sales, according to Gary Kremer's "Heartland History."

Present owners Brad and Kay Lindsey feel they are now caretakers of the historic home.

"We never thought we would own an historical house, but it has such a neat story with the Dix family," Brad Lindsey said. "It's got the 'cool' factor."

Kay Lindsey agreed: "I was compelled to be part of that. I think we've breathed new life into it."

James Coville Babbit was born in New York in April 1841. He served with the 74th Illinois Volunteer Infantry and then with the 13th U.S. Colored Troops.

After the Civil War, he lived in Floyd, Iowa, before he and his wife, Susan, moved to Jefferson City before 1869.

From at least 1874-81, Babbit served on the Lincoln Institute Board of Trustees.

The Babbit children - Dennett, Amy, Myra, Dante, Laura and Walter - were all born in the Capital City before the family relocated to Kansas about 1883.

Leander and Mary Dix moved with their children - Helen, Jessie, Dora, Charles and Mary - into 1919 W. Main St., which they called "Babbit Place," in the late 1880s.

Dix was born in 1843 in New York. He served with the 6th U.S. Cavalry in the Union Army of the Potomac, fighting at Fredricksburg, Antietam and Gettysburg and working at Gen. Sheridan's headquarters, according to the Riverview Cemetery website.

After the Civil War, he traveled through Indiana, Michigan and Missouri looking for a place to settle, according to the Cole County Historical Society website.

He was headed to Sedalia, known at the time as a cattle boomtown, when the train stopped at the foot of Jefferson Street, and Dix got off to view the Capitol, Kremer said.

"A chance conversation with a local resident led him to the awareness that there was land for sale west of the capital city, in the area between modern-day North Ten Mile Drive and West Truman Boulevard."

"Dix inspected the land and thought it offered promise," Kremer said. "He purchased 80 acres and decided to make Cole, rather than Pettis, county his home."

Eventually, Dix amassed more than 340 acres, the first along North Ten Mile Drive, where he built a log house and sold firewood to the Missouri State Penitentiary as he cleared the land for his orchard, Kremer said.

"They were one of the few couples of this vicinity who had lived to celebrate their golden wedding anniversary, which took place four years ago last September," her Nov. 20, 1922, obit said in the Jefferson City Post Tribune.

In 1890, he ran unsuccessfully for the county court justice first district.

The State Republican wrote Sept. 11, 1890: Dix is "a gentleman of most exceptionable character. He has resided in Cole County for a number of years and has devoted his time and energy to the industry of farming, in which he has been engaged as long as he has resided in the county."

The Doris and Rankin Building and Manufacturing Company, Chicago, Illinois, contracted to build a creamery for Dix with the original contract wording "near Jefferson City, on the L.V. Dix farm." The word "or" was written between "city" and "on," before Dix signed it.

Judge Phillips in the U.S. Circuit Court ruled the Chicago-based company waived its rights by remaining silent until the creamery was completed.

The Dix family is buried at Riverview Cemetery.