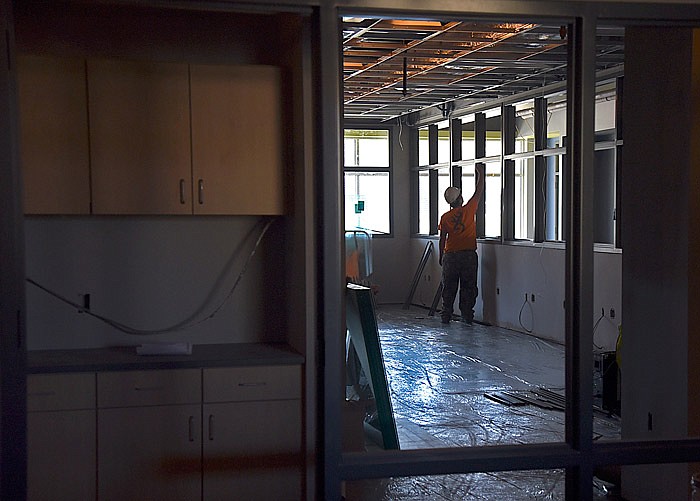 In this Nov. 29, 2016 file photo, a worker is busy on construction of Jefferson City's and Lincoln University's Wellness Center.

Currently, construction workers are paid a state-set minimum wage on state and local construction projects in Missouri because of a state law created in 1959. House Bill 104 proposed to repeal that law. It passed the House in March and had the support of Gov. Eric Greitens before it stalled in the Senate.

While local contractors feel relieved, they also know the bill may come up again in next year's session.

"We have been very concerned about losing prevailing wage," said Greg Schrock, a local electrician and president of the Jefferson City union International Brotherhood of Electrical Workers 257. "It could make or break us."

Meyer Electric Vice President Craig Linhardt said he hopes this will give assembly members time to reflect on the issue.

"Hopefully this will give the Legislature and the people of the state of Missouri time to reflect on the long-term ramifications of how this law affects the working families of Missouri," Linhardt said.

Each year, all contractors, both union and non-union, turn in the hours they work to the Missouri Department of Labor and Industrial Relations. Wages differ by skill set and county. Because local unions collectively bargain wages in each county, all union contractors are lumped into the same pool.

To determine the prevailing wage in each county, the state compares the number of hours worked in each county at the collectively bargained rate and the rate non-union contractors pay. The rate with the most hours worked each year prevails and becomes the wage for each skill set in each county.

State Rep. Warren Love, R-Benton, introduced th bill in January, but it died after being stuck in the Senate when session ended Friday afternoon. Love previously told the News Tribune he introduced the bill after repeatedly hearing from rural residents about projects with costs driven up because of the prevailing wage law.

He also felt the bill would create jobs and be a significant labor reform measure.

"This would be a job-creation bill," Love said at the time. "We've got workers in rural counties that will be willing to work for a lesser rate, and yet it's an increase to them. It's the local people who currently would love to have the work."

Greitens also called for a repeal of the state's prevailing wage law during his State of the State Address in January.

HB 104 easily passed the House March 30, 89-60. With Republican super-majorities in the House and Senate and a Republican governor, lawmakers who supported the prevailing wage repeal were optimistic it would finally pass.

State Sen. Dave Schatz, R-St. Louis County, introduced a compromise bill in the Senate that morning that would've limited prevailing wage projects to those that cost at least $500,000 and changed the prevailing wage to the average wage for workers in each county.

Both measures hit road blocks when Democrats threatened to filibuster the bill with time running out in the session.

"This is an economic issue," said Sen. Gina Walsh, D-St. Louis County, during debate on the Senate floor. "It's a business issue. If we pick up full repeal or the substitute, we're going to cut the legs off businesses men and women across the state who've already laid out their work for the next year or so."

Brown pulled the bill after about an hour of debate, though Republicans and Democrats both figured it'd be brought up again before the session expired Friday. Ultimately, it never was.

This year, Love introduced a bill proposing to repeal prevailing wage for the fifth straight year. He previously told the News Tribune if HB 104 failed he intends to bring it up again next year.

"It would be terrible for construction workers," Schrock said.

Schrock and Linhardt said this was the most serious threat to the prevailing wage law over the past five years. IBEW Local 257 mobilized, sending members including Schrock to the Capitol for repeated visits and making calls to voice their concerns.

"I thought that was the way it was going to go," Schrock said. "Thank God it hasn't happened so far, but it still could."