A new course for Corrections 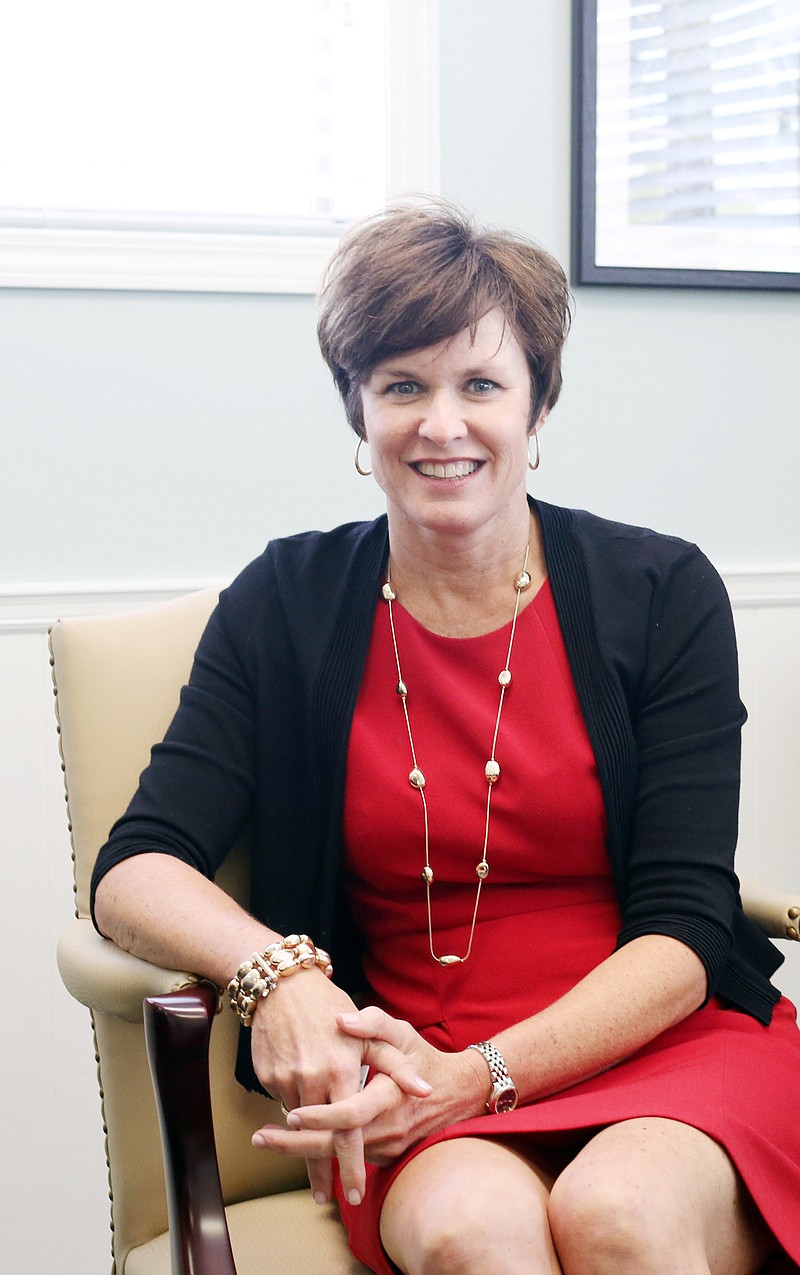 Anne Precythe poses for a portrait in her office at the Department of Corrections in Jefferson City on Wednesday, June 14, 2017. Precythe is the second female director of corrections.

When Anne Precythe walked into the Missouri Department of Corrections in February, she quickly realized she had her work cut out for her.

Her initial assessment of the department was "drinking water from a firehose was very hard," she said. "It was exciting and challenging."

The water spewing from that hose was in the form of controversy and turmoil in the department. Kansas City-based magazine The Pitch reported in November nearly 60 lawsuits had been filed against the department, alleging harassment because of sex, religion or disability and retaliation from supervisors.

The state paid more than $7 million from 2012-16 in settlements and losses, and State Auditor Nicole Galloway is auditing the funds used to pay those settlements. Former Director George Lombardi resigned in December, and Dave Dormier, the director of adult institutions, resigned in March.

Wading through the muddy waters of the department and finding out just how deep problems went was Precythe's first task. She talked to employees in person, on the phone and via email to get a sense of exactly how the department was functioning.

"We responded to that immediate crisis, and we continue to respond whenever we get complaints," Precythe said. "We just can't ignore what our employees are telling us."

Being an ear and resource for employees is what brought Precythe to Missouri. She has more than 30 years of experience in corrections, starting as a probation and parole officer in North Carolina. She worked her way up through the Department of Public Safety in a data management and operational perspective before being appointed director of community corrections.

"If the need here was not my skill set, then I knew I wouldn't be interested," Precythe said. "One of the big focuses the governor had was the employees, and that's something I'm strong in."

The Department of Corrections is a beast of its own even without the trouble it faces. It received more than $726 million in fiscal year 2017, ranking eighth among 15 state departments. It has the largest staff of any state department as well, with more than 10,000 employees.

With employees and resources spread between 21 correctional facilities, changing the culture is no easy task, but Precythe said it has to start at the top. She wants to improve intradepartmental relationships between staff and administration.

"The best way to start it is to model it yourself," Precythe said. "What I've challenged the wardens to do is not only to do a self-evaluation about what kind of manager are they but also to really evaluate their administration."

A House of Representatives subcommittee formed to investigate the department and issued a report with recommendations in mid-May. Rep. Jim Hansen, R-Frankford, chaired the committee and worked with Precythe during the 10-week investigation.

The committee heard testimony from current and former department employees, ranging from corrections officers to high-level administration. A 6-inch stack of emails from employees sits on Hansen's desk, and he said the consensus was clear about what was happening.

"The Department of Corrections and our system was in total chaos and needed major attention in a lot of areas," Hansen said. "We heard a pretty consistent story about what the problems were."

Those problems were with department leadership and how policies and procedures were being enforced. Precythe said several of the committee's recommendations - focusing on leadership, complaint handling and employee recognition - were already policy but weren't being followed.

"You just kind of wonder, 'How did it get this way?'" Precythe said. "I don't know how it got that way, but I know how we can begin to fix it. And that's my goal."

Precythe has been quick out of the gate to achieve that goal.

The Office of Professional Standards was established to improve the efficiency and effectiveness of internal investigations, and it will apply discipline more consistently throughout the department.

Precythe has beefed up the intelligence and security units, which manage prison security systems and operations. Her administration will have a zero-tolerance policy for harassment, workplace violence and retaliation.

With a background in skill-building and leadership training, Precythe has re-evaluated how the department handles promotions and who receives them. Interview questions were changed and grading benchmarks created, placing an emphasis on management, judgment and conflict-resolution abilities.

Handling those policies and procedures is one thing the previous administration got wrong, Hansen said. A culture had been growing that seemingly allowed administration to create a different set of policies for themselves.

"They had their own way of doing business," Hansen said. "The person at the top was allowing it to go that way. You can't put it any plainer than that."

Former settlements and payouts were never reported to the General Assembly, but Hawley's office has begun publishing monthly reports of the Legal Expense Fund, which list every lawsuit the state settled or lost during that month. That fund is also being audited by Galloway.

Hansen said the Legislature will do its part to stay informed and increase transparency. Precythe has been asked to report to the committee on a quarterly basis, and the committee will question wardens in hearings if it doesn't see improvement.

That improvement goes beyond internal operations for Precythe. She wants to change the way people think about prisons and focus on the positive work that happens inside them.

"I've got to get the public to understand the cognitive restructuring we're doing with our offenders," Precythe said. "We're offering them the opportunity to think differently, to make better decisions."

As Precythe continues restructuring the department and changing public perception, she's keeping her eyes dead ahead.

"I believe the past helps you determine how you move to the future, but it doesn't prevent you from moving forward," Precythe said. "I have not dwelled on what's happened in the past. I'm learning from it, and we're using it to fuel us to move forward."