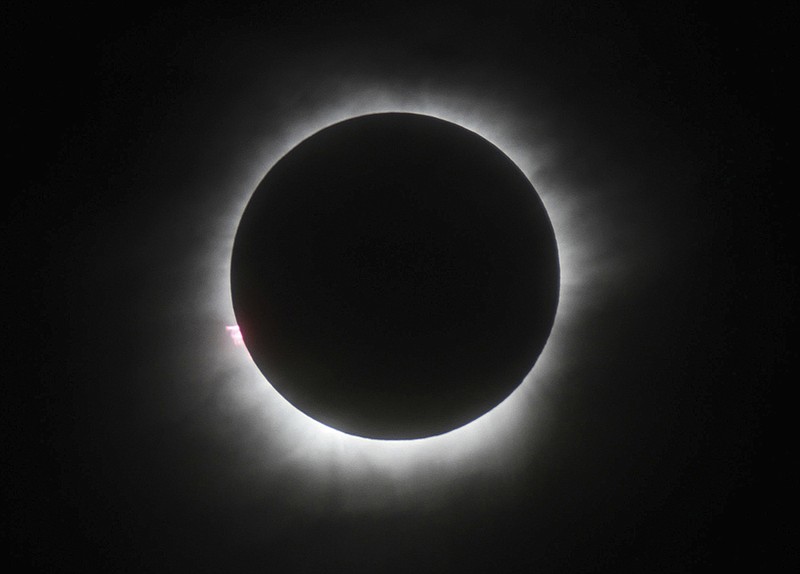 With just more than two months until an August solar eclipse brings thousands of visitors to town, Jefferson City officials are finalizing plans for events surrounding the eclipse.

The Jefferson City Convention and Visitors Bureau held its monthly meeting Wednesday night at the Capitol to update the public on plans surrounding the event. A NASA representative announced the city will be one of seven from which the space agency broadcasts a live feed of the solar eclipse. Meanwhile, the city will hold concerts and other events to give the expected thousands of visitors things to do during their time in Mid-Missouri.

NASA will bring its NASA Journey to Tomorrow trailer to Jefferson City during the days surrounding the event. David DelFelice, the community relations team lead at the NASA Glenn Research Center in Cleveland, said the trailer is essentially a mobile museum. NASA also plans to film the solar eclipse from Charleston, South Carolina, to parts of western Oregon to allow researchers to study eclipses.

"What we're going to do across the country is tell the story," DeFelice said. "Right now we're focusing on how space weather effects communications (satellites).

"We'll be showcasing what's going on in Jefferson City. We're looking forward to it."

"We found out about this two months ago, and we just had to stop and hold everything because this has to fall into place, then we'll bring everything else around it," Gillespie said.

A Saturday night concert similar to the city's Thursday Night Live will take place Aug. 19. Downtown will be shut down for the event and streets will be closed. Tourists and residents will be able to buy wristbands to the event for $2.

Most festivities will take place at the North Jefferson City Recreation Area because it offers one of the best views of the eclipse in the city. A smaller event will also take place at the Capitol, but officials said previously the spot won't offer as great of a view. Tours of the old Missouri State Penitentiary are also sold out on Aug. 21.

Jill Snodgrass, the event coordinator for the Convention and Visitors Bureau, said the city has about 40 volunteers signed up right now to help with the event, but more are being sought. Having NASA's plans nailed down allows the city to finalize its plans and see where it needs volunteers.

"Right now, we're waiting to see what plan is going to develop and where we're going to use people" Snodgrass said.

Snodgrass previously told the News Tribune the city expects to make $1.1 million just from the 20,000 visitors expected to drive to Jefferson City the day of the event. City officials also expect 5,000-6,000 cars to pay $10 each to park in North Jefferson City.

Angela Speck, an astrophysics professor and the director of astronomy at the University of Missouri said the city needs to target tourists within 200-400 miles of Jefferson City, because they are the most likely to travel to the area. International visitors from Australia, Germany and Finland are also expected though.

"We know that there are lots of foreigners," Speck said. "There's going to be a lot of people."

This solar eclipse is a special one, Speck said. Unlike the last two solar eclipses visible in the U.S. in 2012 and 1994, this will be a total solar eclipse where the moon's orbit will cover the entire sun. During the eclipse, it will appear as if the sun set and be dark for two minutes and 29 seconds.

Speck said eastern Oregon is the best place in the country to view the eclipse because its high altitude and thin atmosphere will amplify the similarities to a sunset.

Jackson Hole, Wyoming, will also be a popular destination. Both places lack the infrastructure existing in Mid-Missouri, which may make this region a popular place among tourists.

The best place to watch the eclipse in the region actually is near the Columbia Regional Airport near Ashland. Still, Speck said Jefferson City residents wanting to watch the event should just stay put.

"It's not worth traveling somewhere else," Speck said. "Because there will be so much going on."