Dancing his way to 'America's Got Talent' 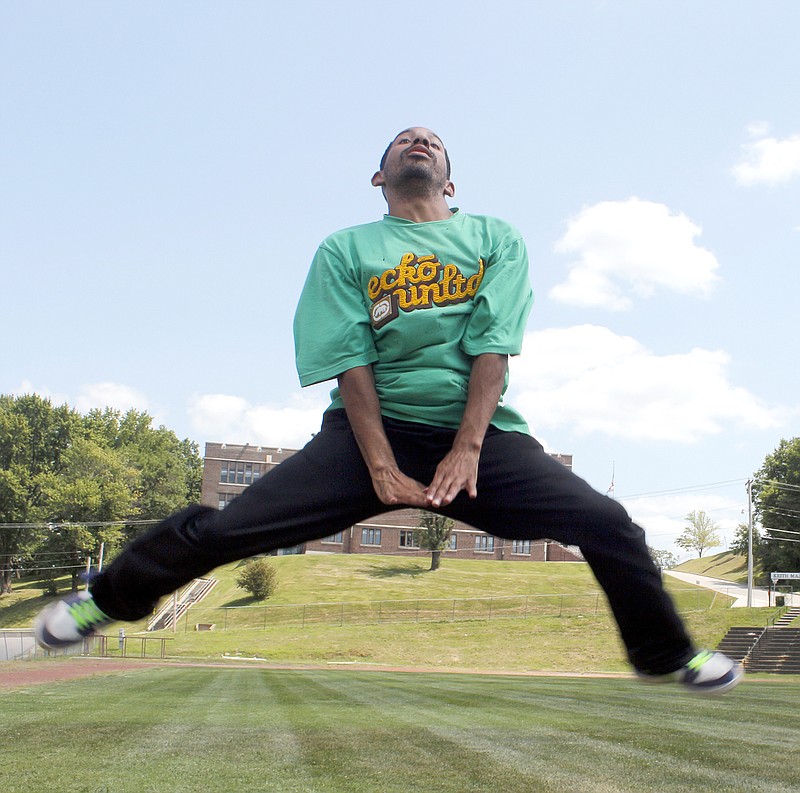 James Kindred leaps into the air Monday as a part of his routine to "Revolution" by Kirk Franklin at Keith Major Field. Kindred first auditioned for "America's Got Talent" in 2016 and has been practicing his routine ever since to get it right.

James Kindred's mother and mentor, Karen, once told him: "A winner never quits, and a quitter never wins."

Those words have fueled his passion for dancing since he was a child. With no formal training, Kindred created unique, fluid moves to the rhythm of music, securing him awards at school and community talent shows, and performances at camps, churches and other venues.

Now in his 30s, Kindred has pursued his dream to dance professionally, auditioning in 2016 for "America's Got Talent," NBC's talent competition for amateur performers. The Jefferson City native didn't make it past the initial open call auditions - but he is a winner, not a quitter.

Kindred plans to dance again for "America's Got Talent" judges during an open call audition Nov. 5 in Orlando, Florida. He hopes to perform during the show's 13th season, airing next year.

He'll preview his audition performance and other dance selections between 3:30-4 p.m. Saturday at the parking lot by the Missouri River Regional Library.

"All I'm worried about is making the audition and getting support. I want everybody to come out and watch me dance," Kindred said. "People ask, 'Why don't you give up? You are too old.' If it is your dream, it is your dream. I'm not going to give up. You just got to keep working for it.

Kindred's first two showcases were performing at a school talent show, then entertaining family and friends at his aunt's wedding. At age 6, his moves caught the attention of the wedding DJ, who turned up MC Hammer's "You Can't Touch This" for the young Kindred.

Kindred's boost of confidence in his dancing turned into a daily part of his life. Born and raised in Jefferson City except for a short time in St. Joseph, the Capital City resident dances everywhere - out and about, at home, and even when he is working, including times when he waved promotional signs for Metro PCS and Boost Mobile businesses.

"I've danced there, walking down the street or whatever. I have my headphones in, and I'm dancing," he said. "People smile, they wave their hands and they'll honk their horn. I'm blessed."

All types of music inspire Kindred's freestyle dance moves, which also holds true when he sings and raps.

"(My singing) is calm, cool, collected gospel-influenced rap and vocals," the 2001 Jefferson City High School graduate said, noting he has sung in church choirs and during other dance performances in the community.

He has kept his auditions for "America's Got Talent" to dance. Kindred said the judges told him he did well but received no callback. He didn't let it discourage him from trying out for the show a second time.

"If you go to an audition and they said you did good but you don't get a call back, just remember, you did good. If a judge tells you that you did good and you don't get any more information or move on to the next round, don't get mad," he said. "Be thankful or proud you made it to the audition, and try out the next year. Don't give up your dream."

In recent years, Kindred has won a grand prize for his dance at an annual St. Joseph community Christmas talent show. He is scheduling dance showcases at local churches and is planning a "dancing in the streets" event in downtown Jefferson City in the near future.

Kindred knows reaching his dream to dance professionally takes a lot of hard work. He is also preparing to continue his higher education this fall at Lincoln University, wanting to earn a degree in dance.