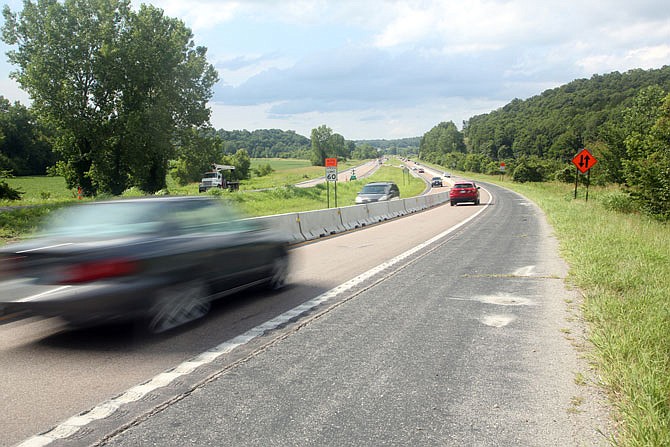 Cars travel head to head on U.S. 63 on Thursday over the Katy Trail north of Jefferson City. Construction crews plan to pour the bridge deck on the south side of the highway tonight. Both lanes should be open by Aug. 21.

Concrete for the new deck on the U.S. 63 Katy Trail bridge is set to be poured Friday night, according to a news release from the Missouri Department of Transportation.

The deck pour, which will start at 10 p.m., is being conducted at night, when lower temperatures will help ensure the concrete cures properly.

Work to replace the bridge deck is progressing on schedule, MoDOT officials said.

"We're at the halfway mark with this project," said Aaron Peck, resident engineer for MoDOT's Central District. "If all goes according to plan, we should have the bridge back open to traffic by Aug. 21."

MoDOT entered a contract agreement with Capital Paving and Construction to make sure the bridge was open before Aug. 21, the date of the total solar eclipse, Peck said. Traffic on Missouri highways is expected to increase dramatically around the eclipse date as an estimated 1.2 million visitors come to the state to view this unique happening. Some additional work will take place after the bridge is open, and the entire project is scheduled to be completed in September.

In addition to the new deck, which will widen the bridge, the project will bring the guardrail and bridge barrier on the southbound structure up to current standards. The work will allow the bridge, which is more than 60 years old, to provide an additional 20-30 years of service.

Message boards and signs are in place to direct traffic through the work zone. A Smart Work Zone system also is in place, using cameras and sensors to provide real-time travel updates to motorists via message boards.

Peck also reminded drivers to use the zipper merge concept when traveling through the work zone. When traffic is slowed or stopped, the zipper merge encourages motorists to use both lanes of traffic until they reach the point where the road is closed, then take turns with other drivers to safely ease into the remaining lane. The zipper merge could reduce traffic backups by up to 50 percent, Peck said.

"So far, we've only experienced a few major traffic backups, mostly due to incidents that have occurred in or near the work zone," Peck said. "We're hoping the rest of the project runs just as smoothly."