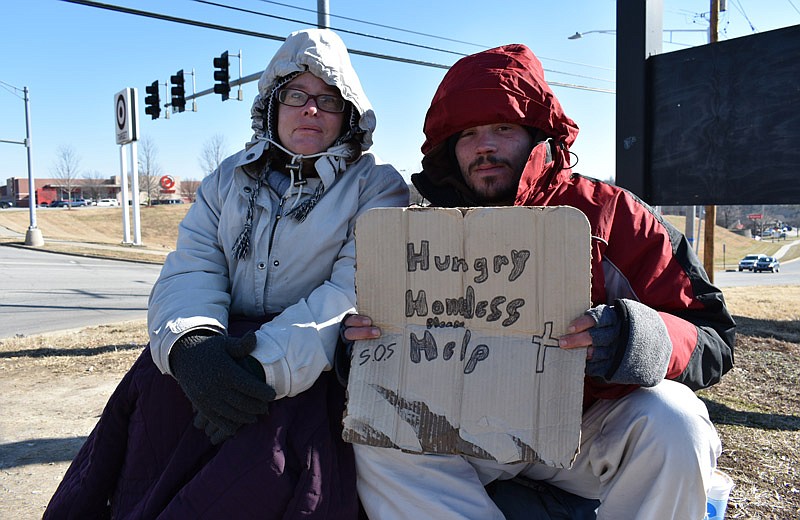 In this January 2017 photo, Lawrence Oker and Janet Harris hold a sign soliciting help from passing motorists in Jefferson City.

On a cold January day, the struggle to find a meal and a warm place to lay your head can seem insurmountable to the homeless.

Central Missouri agencies are all too familiar with the challenges of helping those without shelter find a home - whether it be temporary or more permanent. But they acknowledge their resources are limited and may not stretch far enough, especially when the climate turns inhospitable.

Local panhandlers Lawrence Oker and Janet Harris said for them overcoming homelessness is an uphill battle.

"We're wasting our time on the corner, when what we need is a place to stay so that we can get up on our feet," Harris said. "It's a fight for survival for the poor people, and it doesn't look like we're winning any time soon."

So, where do the homeless go in Cole County?

The Salvation Army is a great resource for members of the homeless population who are able to present identification and can meet the shelter's basic entry guidelines. But for some people, those guidelines are simply barriers.

"There's this assumption that we (Jefferson City) have resources to help everyone, and this just isn't so," said Kristen Hilty, director of Common Ground, a community center sponsored by area churches and donors that provides help to those in need. "The agencies who do have resources are all very limited."

In order to become a resident at The Salvation Army for one evening, a person must show a piece of valid identification, have no criminal charges against children or the elderly, and they must pass a breathalyser test.

Hilty told the News Tribune there are two main groups of people who don't fit the criteria for entry: families who are in the cycle of chronic homelessness, which means they can no longer stay at the Salvation Army for whatever reason; and transitional families who may not be "homeless" but do not have stable housing.

"We try to make our programs at the Center of Hope low-barrier programs," Major Nancy Holloway, area coordinator for The Salvation Army, said. "But the reality is not all people can handle community living due to a variety a reasons; mental illness being one of them."

While recognizing as the weather gets colder a lot of people move farther south, Marilyn DeFeo, executive director of the Samaritan Center, said she found a homeless count of 69 people surprising.

Holloway agreed the number is a little low, considering some of those people may include the residents at the Center of Hope.

The point-in-time count (PITC) is an annual count of the sheltered and unsheltered homeless population across the state. According to the report, reasons for unsheltered homelessness include the inability to pay rent, unemployment, physical disability, divorce and incarceration.

The PITC includes people of all ages, but there is a very discerning difference between the 2016 PITC that reports less than 2 percent of people under the age of 18 falling in unsheltered homeless category and 135 unsheltered youth reported by Jefferson City HALO and its chief executive officer, Rebecca Welsh.

HALO has a local teen homeless shelter that has been housing youth in the Jefferson City community since 2015. There has always been a wait list for youth to get into the housing assistance program, Welsh said, but with the grand opening of its new facility, HALO will have even more space for more residents.

Welsh and DeFeo attribute the differences between the two counts to stigmas attached to teen homelessness and to the fact some people are just off the radar.

"These youth can be totally off the radar because being a teen and being homeless is not cool," Welsh said. "If you don't have an existing relationship with the youth, you probably would never know."

Added DeFeo: "I would have to wonder whether or not the couch potatoes are being counted. Sometimes when we cross-reference addresses in our computer system, we find that there are as many as five different families living at one address."

Holloway emphasized transitional housing for youth may be the service most needed in the Jefferson City area.

"The Center for Hope Shelter is not designed to assist youth unaccompanied by an adult, but it does encompass service areas that include shelter, rental assistance and emergency assistance," Holloway said.

For the past year, Hilty has been a part of the Homelessness Task Force, which addresses the issues associated with homelessness locally. So far, the task force has been a part of efforts such as Project Homeless Connect, an annual event that brings together a network of state agencies offering resources such as state identification cards, clothing items, haircuts and other services for the homeless population.

Since then, the task force has been helping address some of the long-term problems that come with homelessness.

But in the meantime, where do the homeless go?

On days when the weather may be a bit brisk, many warming stations across town - including the Missouri River Regional Library, The Salvation Army and Capital Mall - are open for people to come in for a period of time to get warm.

On evenings, when the temperature is below 40 degrees, The Salvation Army opens its doors to people who are eligible based on their guidelines and based on the amount of cold cots they have available.

In total, The Salvation Army has 40 beds for residents, who have applied and pay off their services by working in different capacities around the organization. There are typically only eight cold cots available per sex on any given night.

Dion Tucker, The Salvation Army shelter director, told the News Tribune if they were to become filled to capacity, people do have the option of coming in and sitting in the dining room to warm up, but they are not allowed to go to sleep.

"Even though The Salvation Army may not have the capability to house a lot of people, they do a good job of pulling in other resources and agencies to help," Hilty said.

Agencies like Common Ground and the Samaritan Center try to help pay for temporary housing for clients and those in need. In addition to granting rental deposits for those who can't afford their initial housing payment, Common Ground helps clients by referral with auxiliary services like vouchers for rental housing assistance and helping them to attain vital documents such as state identification cards and birth certificates, which are necessary when applying for stable jobs and housing.

The Samaritan Center works with the police department to identify people in need of temporary shelter by placing them at a local motel. So far, DeFeo said, the center has paid for six people to stay at the motel.

"I don't think the city is aware of how prevalent homelessness is in the community," DeFeo said. "Many of them are veterans who are too embarrassed to ask for help, and it's our duty to help take care of them."

She explained some veterans find themselves in this situation because they don't trust anyone to help them.

"I find that most of them have a mental illness," DeFeo said. "When they came back (from Vietnam), most of them were traumatized. Plus, the unwelcoming response they got didn't help."

One way the homelessness task force would like to combat homelessness in the long-run would be to establish a citywide housing-first model.

Having a clean criminal history, basic pieces of identification or a source of income are major barriers for people who don't fit the mold of traditional entry requirements, which further limits the possibility of them becoming stable and integrating back into society. Hilty would like to see these issues come second-hand to providing those in need of a place to stay.

Hilty describes the model as being a long-term solution to circumventing these initial barriers to obtaining housing. She also mentioned minimum wage rates and a lack of affordable housing resources as other key barriers.

"Cost is always an issue, but it's going to take the entire community to address these issues," Hilty said. "Giving out resources like backpacks, socks and blankets is nice, but it has to go hand in hand with the long-term solutions."

DeFeo agrees. She said ideally she would like to see an affordable housing model where there are small individual units that provide room and board to people. She explained the buildings look like small cottages but offer bedrooms providing a sense of ownership for the residents.

"This would be great for them," DeFeo said. "Anybody would be happy to have a place of their own to stay."

Holloway said she isn't sure homelessness could be completely eliminated because of limited resources.

"I don't know if tiny houses would be ideal, because again, everyone can't handle community living," Holloway said. "In any model, permanent housing is the long-term goal, and to do that, you have to have sustainability."