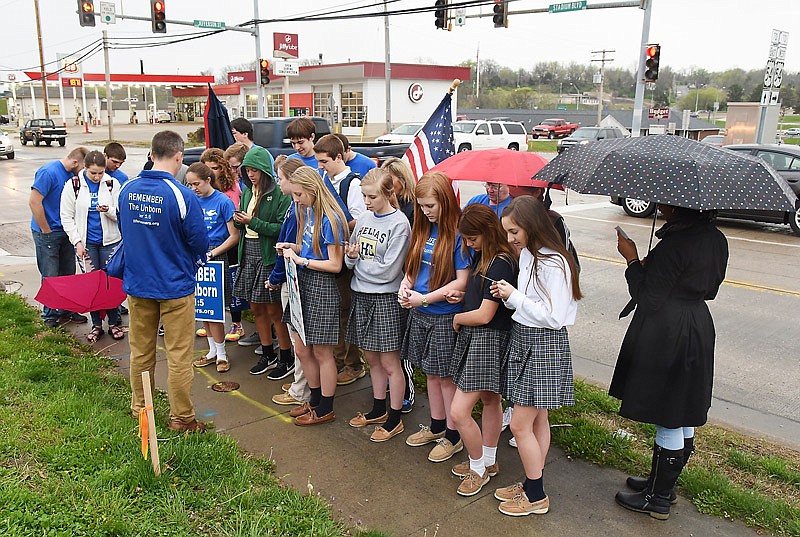 Pat Castle, back to camera, leads the Life Runners group in prayer in April 2016 at the intersection of Stadium Boulevard and Jefferson Street in Jefferson City. The largest student chapter of the worldwide organization is from Helias High School and boasts 80 active members.

The pro-life community has seen an infusion of enthusiasm and young participation through the Life Runners organization.

In Jefferson City alone, four school-based chapters joined in 2016 with two other school chapters and the first city chapter, formed in 2011.

"I feel that the Life Runner program has exploded to what it is because kids, teens and adults see the importance in ending abortion," Kristina Wortmann, student leader of the new Blair Oaks chapter, said. "Being a Life Runner helps you express your feelings in a peaceful yet powerful meaning by wearing your shirt around school or town."

The local Life Runners will participate in the Midwest March for Life on Feb. 4 and in the national A-Cross America Relay as it passes through Mid-Missouri in April.

The AJ Schwartze Community Foundation recently gave Life Runners a grant for a billboard on U.S. 63 outside Freeburg, as well as Life Runners gear for the PALS cross-country conference, which includes more than 200 fourth- through eighth-grade runners from 10 Catholic schools and one Lutheran school.

Life Runners founder Pat Castle, who was a leader at the National Walk for Life on Saturday, said Life Runners gives people the opportunity to put their faith in action, "witness with fitness," he said, quoting Hebrews 12:1-2: "Let us persevere in running this race set before us."

Castle said he feels Life Runners has impacted "many hearts and minds for saving lives. Such a positive way to put pro-life in action.

"We rarely get a negative response from (our) 'Remember the Unborn - Jer 1:5' jersey because it is loving and not judgmental," he said.

Mike Rackers, co-leader of the Jefferson City Life Runners, noted how this organization provides a different outlet for those who support the pro-life mission.

"Many times fundraising becomes the focal point for promoting a cause - and don't get me wrong, that is very important - but the beauty of Life Runners is that our top priority is to wear a shirt when running or walking that says we are pro-life," he said.

Because students are the future, Rackers said this is a way to "instill in them the value of life - all life, so that they will make morally correct decisions in the future."