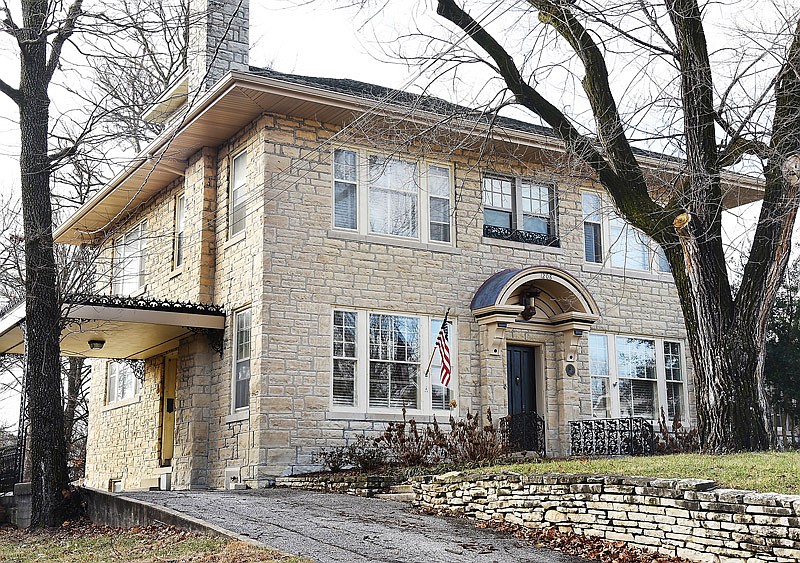 In a Jefferson City neighborhood where several Missouri governors have made their home before being elected into the Executive Mansion, 1208 Elmerine Ave. hosted many a reception for newly elected governors as well as being home to former Gov. Jay Nixon.

Called a "colonial revival" style in the 2008 survey of the Moreau Heights neighborhood by the State Historic Preservation Office, the home was built about 1924.

The Howard Cook family - wife Gertrude and sons Winston and Sam - moved in in 1928.

"In the 1930s, it became a tradition at the Cook home to host lavish inaugural parties for the incoming governors," the nomination said.

Fitting, then, that Jay and Georganne Nixon lived in the home immediately preceding his inauguration in 2008.

Gertrude Cook also was known for her impressive Halloween offerings.

Nixon's wife, Georganne Wheeler Nixon, remembered visiting the home as a young girl during Halloween. She and her friends were invited into the house and served hot cider and homemade popcorn balls while being seated in front of the living room fireplace, according to the late Jerena Giffen in her biography on Sam Cook II.

The Cooks sold the home after 50 years to Tell and Tina Neff. The Nixons bought the home in 1993 when they moved from DeSoto after he was elected Missouri attorney general.

After choosing to stay and run the bank after losing the election for governor, Sam Baker Cook moved the Central Trust Company into its current, seven-story building, designed by local architect Frank Miller and built of the same Carthage stone used in the Capitol construction, in 1916, according to historian Gary Kremer's Heartland History.

In 1933, Howard Cook was president of Central Trust when the Great Depression nearly shut down state government. He advanced the state enough to money to make its payroll for the year, according to the city Landmark nomination.

Howard and Gertrude Cook lived in a rented house on Woodlawn Avenue in the Woodcrest area, where son Sam Baker Cook II was born in 1922, according to Jerena Giffen's biography of the latter.

The young family later moved to a rental home on West Main Street near the end of the streetcar tracks. After his brother, Winston, was born in 1924, the family soon moved into 1208 Elmerine Ave.

"The neighborhood was populated primarily by families of professional men including doctors, dentists and directors of government agencies," Giffen wrote. "Thus, it was an appropriate section of the city for the family of Howard Cook, who became bank president in February 1931, shortly after the death of his father."

Sam Cook II enrolled in the Reserve Officers' Training Corps at the University of Missouri-Columbia in fall 1941, just as all male students were required at the time to do. After the mandatory two years, Cook advanced to sergeant major of the Tiger Battalion, an elite ROTC field artillery unit.

During World War II, he served as a general's assistant. On May 8, 1945, commonly known as Victory in Europe Day, Cook accompanied the general to a meeting at the former Supreme Headquarters Allied Expeditionary Forces in the Reims, where he observed Gen. Dwight Eisenhower, among other famous military personages.

Winston Cook survived the Battle of the Bulge in World War II, living at the family home until his death in the 1978.