Uber anxious to showcase its service with free rides for inaugural 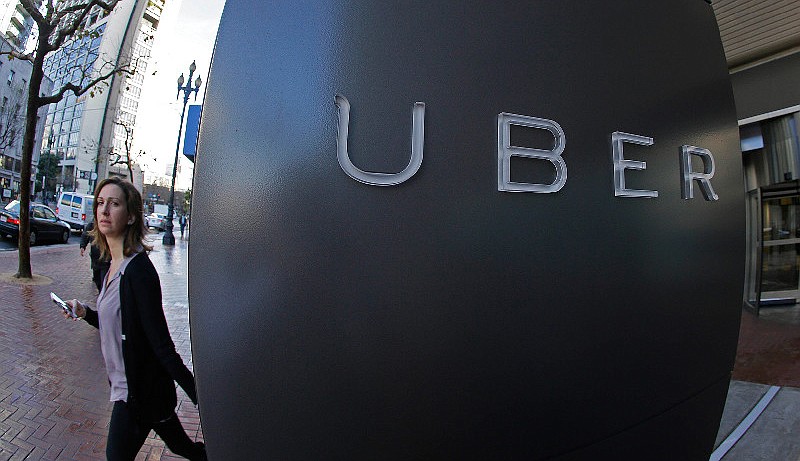 In this file photo taken Tuesday, Dec. 16, 2014, a woman walks past the company logo of the internet car service, Uber, in San Francisco.

That's because he'll be at work around 8 a.m. Monday and may work as late as 2 a.m. Tuesday. However, he won't be putting in an 18-hour day with future art teachers Monday. In fact, he doesn't have a clue with whom he'll be working.

Nyaberi will be driving for Uber, offering free rides to those coming from and going to events associated with the inauguration of Gov.-elect Eric Greitens.

Nyaberi is one of some 50 Jefferson City residents and 100 Columbians who are certified Uber drivers activated for the inauguration. Uber will pay each driver their standard $1.35 per mile rate, earnings Nyaberi and the others will see in their bank accounts Wednesday, their regular payday. Any gratuities offered by his passengers will be a bonus, Nyaberi said.

He was part of a team, with lobbyist Becky Lohmann and state Rep. Travis Fitzwater, R-Holts Summit, that helped convince the Jefferson City Council to pass special municipal legislation to allow the modern taxi service to operate on inauguration day.

"It's my hope the Jefferson City Council approves this so I can do my Uber work from here and not have to drive to Columbia," said Nyaberi, who earns about $100 per day with Uber.

Andy Hung, general manager of Uber-Kansas City, will be in town to orchestrate the service for the thousands expected to participate in the inaugural ceremonies. Nyaberi said he did not know Hung, and he and the other drivers - whom he also does not know - had no plans for a meeting or coordination of activities Monday. It's all based on riders tapping the Uber app on their smartphones.

Hung, who studied economics at Yale and holds an MBA from the Kellogg School of Management, is a devotee of mobile behavioral economics, which he describes as "why having a supercomputer in our pockets is fundamentally changing the way we think."

He said of the unique Jefferson City adventure ahead for Uber: "We could not be more excited to be a part of the inauguration day experience and to bring ride-sharing to Missouri's state capital for free for the day.

"We are eager to showcase to Jefferson City residents and visitors alike how they can push a button on their smartphone and get a ride on-demand within minutes. While many are familiar with ride-sharing, we know some will be trying Uber for the first time, and this will be an opportunity to discover the ease and convenience of our service."

Legalese notwithstanding, Mayor Carrie Tergin and the City Council embraced the Uber plan for the inauguration with unanimity and unvarnished enthusiasm.

"Jefferson City is ready to start the New Year and celebrate the tradition of inauguration day as Missouri's new elected officials take office. We are excited about Uber's offer to give our residents and visitors to our city free rides," Tergin said.

Second Ward Councilman J. Rick Mihalevich, who sponsored the original bill passed last week, has been exploring the niche Uber might fill in the Jefferson City public transportation scene for about 18 months, including conferring with Tom Landwehr, owner of Checker Cab, the only licensed taxi service in the community. Mihalevich said he and City Administrator Steve Crowell evaluated the issue with Landwehr last week. Landwehr was praised at the council meeting for withdrawing previous objections to Uber.

"I think Tom realized times are changing and that this would be good for the community, especially on this one day when Checker could not possibly handle all of the demand for taxi service," Mihalevich said.

Mihalevich added he had received emails, Facebook messages, phone calls and other contacts encouraging him to proceed with his leadership on flattening Uber objections in Jefferson City. "I've had several comments along the line of 'Hey, I'm with you,'" Mihalevich said.

He's also anxious to watch how the Missouri General Assembly will address the statewide regulation of transportation network companies like Uber. At least two bills already have been filed to allow but regulate the services. Legislation passed the House last session but died in the Senate.