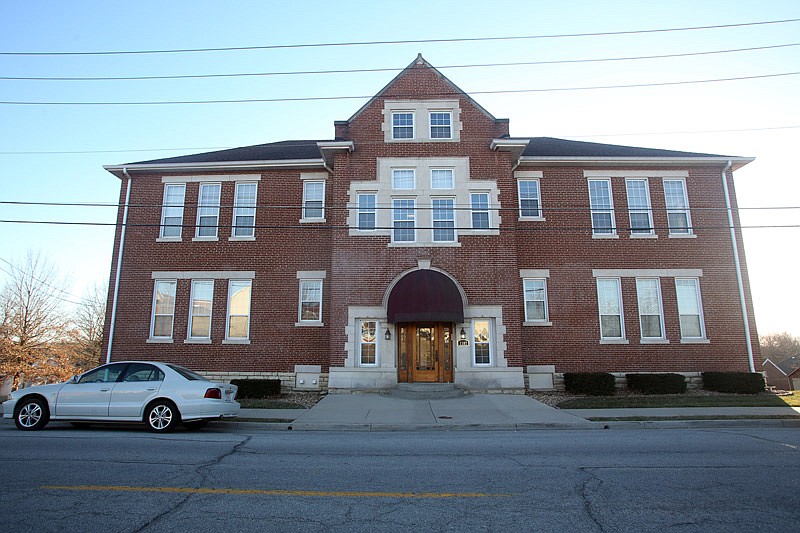 Its origin was one of Jefferson City's earliest grammar school expansion projects. But its history comes more than 50 years as an apartment building.

In 1903, it was the long anticipated West End School.

The Old West End School, "for many years, (was) the center of neighborhood life and activity," the Lower Jefferson Conservation District recorded. "(It) predates many of the residences that surround it. The presence of a school building in the neighborhood undoubtedly hastened the growth and development of the neighborhood."

By 1900, Jefferson City was "in great need of more and modern school buildings, a question which is now being agitated and will doubtless result in the erection of additional buildings in the near future," the Illustrated Sketchbook said. At the time, public schools had 1,100 pupils in grades eight and below, more than 200 were in private schools and another 300 at Lincoln Institute.

At the turn of the 20th century, the existing school buildings were using mobile-framed buildings borrowed from the St. Louis schools to alleviate crowding, according to the book "Jefferson City Public Schools" by Laramie Thompson and Suzanne Richter.

It took four tries to pass a bond proposal of $80,000 for four new buildings, which passed 1,162-80. In addition to the West End School, Fairview was built at the northeast corner of High and Chestnut streets, Washington School on Elm between Lafayette and Cherry streets, and Broadway School still standing at the corner of Broadway and Dunklin Street.

Students in grades one-eight first occupied the classrooms in 1903 under the first principal, Carrie Bohn. The following year, grades were lowered to first through sixth, under Principal Ada Leslie.

The West End School in 1906 was the site of the formation of the city's "first formalized group of school patrons," the Nov. 21, 1968, Jefferson City Post-Tribune reported.

Two rooms were added in 1932, allowing the half-day kindergarten class to move out of the attic in Mrs. Bacon's home, Jerena Giffen said in "House on Hobo Hill."

By 1938, the Jefferson City Public Schools included kindergarten through junior college classes with an enrollment of 3,506 and nine buildings, James Ford said in his "History of Jefferson City."

That year, the Old West End School was replaced with the present-day West Elementary School at Dix and West Main streets.

Ford said that building program at a cost of $600,000 also provided a new junior high building, East Elementary School, an addition to Washington School and an athletic field.

The original plan was to convert the Old West End School as a junior high, but the agreement with the federal government for the new project said the old building could not be used again as a school.

In fact, the federal government initially stipulated 1107 W. High St. must be razed, but the district obtained a waiver, Giffen said.

The historic Landmark was sold in 1940.

For the next four decades, it would be known as the Klugg Apartments.

Joseph Klugg was born in Overath, Germany, in 1889, immigrating with his parents to Miller County by 1900.

A blacksmith by training, he married Ida Groff in 1917 in Blackwater and by 1920, the couple was living in Cole County, where he owned his own blacksmith shop.

They moved to Jefferson City in 1926.

They lived among their renters at 1107 W. Main St. for decades. The apartments served young couples, immigrant professionals, widows and businessmen.

Joseph died in 1968 and Ida continued to live at the apartment building for another decade. She died in 1985 in Texas. Both are buried at Hawthorn Memorial Gardens.