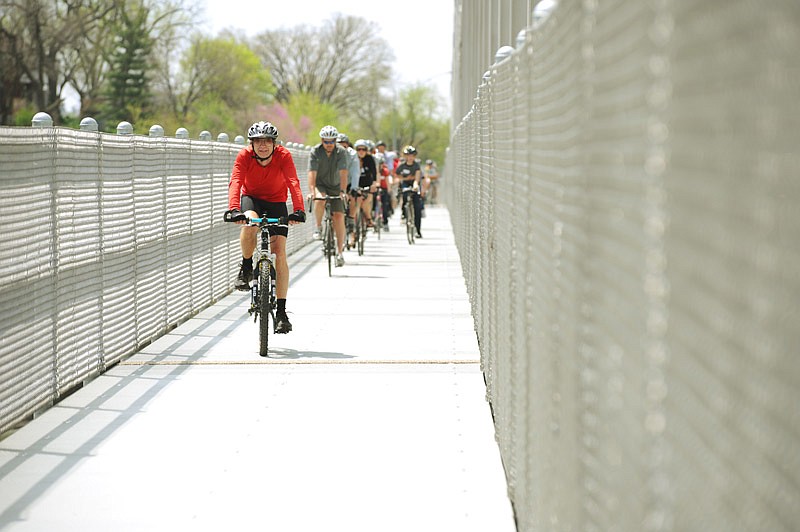 In this April 11, 2011 file photo, bicyclists traverse the bicycle/pedestrian lane attached to the northbound Missouri River bridge in Jefferson City.

Since being resurrected this summer, the Jefferson City Bicycle Subcommittee has been working to expand the city's cycling culture - including starting a bicycle-friendly business program.

The program would involve signs or stickers along the Greenway Trails, pointing cyclists toward specific businesses that offer incentives.

The subcommittee has not reached out to businesses yet, but plans to in the spring, Varner said. Subcommittee members are discussing the best way to implement the program, which also will require work with the Parks Department on the business signs or stickers.

Varner said since there are businesses located near the greenway, she thinks the bicycle-friendly business program would operate smoothly. "We know that cyclists like to spend money and that they will come off the trail to support their local community and support economic development," said Varner, healthy communities coordinator and wellness navigator at Capital Region Medical Center.

Zagster representatives visited Jefferson City a few weeks ago to speak with potential sponsors, and Varner said many businesses and groups were interested in the program. Businesses and groups that agree to sponsor the bike-share program could advertise on the bikes, which Schroeder said would tie back into a bicycle-friendly business program.