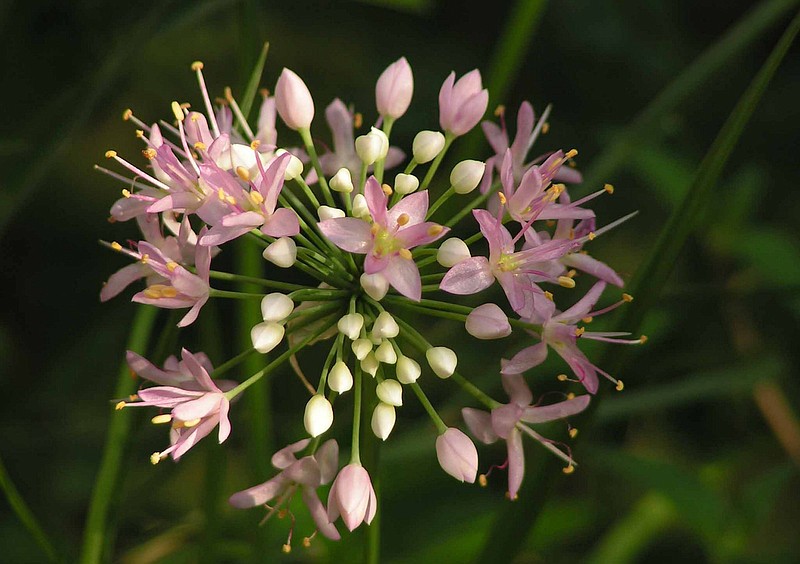 (Photo by Randy Tindall/Nadia’s Backyard) Prairie onion is often used to decorate gardens and landscaping because of its short stature and delicate pink flowers in clusters or umbels resembling fireworks. 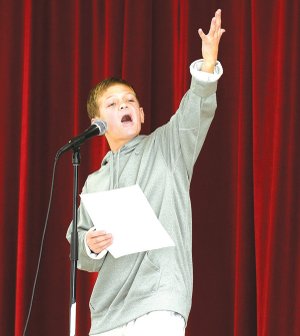 Prairie onion is a native plant that can be established in gardens or in pots as an ornamental for their short stature and delicate pink flowers in clusters or umbels resembling fireworks. Flowers are produced from late summer to early fall in stalks from 10-18 inches long and leaves 8-24 inches long.

Prairie onion is also known as fall glade, cliff, wild or pink wild onion because its natural habitat can be dry prairies, cliffs or glades, and pink flowers. In these habitats, the bulbs are small, around 11/2 centimeters in diameter, but in more pampered conditions in gardens they can be up to 41/2 centimeters in diameter. Because of that, prairie onions have the potential to be grown as specialty crops, both for the bulbs and for its edible flowers. They do not compete well with taller plants and require full sun for normal growth. My husband, Randy, and I have observed prairie onion flowers in our yard visited by native bees, butterflies and even hummingbirds.

According to results from the FINCA study by the Native Plants Program at Lincoln University with funds from the National Institute of Food and Agriculture (NIFA) from 2012-16, prairie onions established in raised beds performed well. When propagated from seed, it took three to four years for plants to bloom, but that process was reduced to one year when propagated from bulb division.

The edible flowers can be used to add a hint of color and flavor to salads and appetizers and the bulbs with their characteristic onion smell and flavor can be used to replace regular store onions. This onion is used at Dining Wild events in appetizers, soups and entrees. Results of food-tasting evaluations showed that people were highly satisfied with their flavor.

Prairie onion, or Allium stellatum, is in the Liliaceae family. George Yatskievych describes nine Allium species in Missouri in the "Flora of Missouri," Volume 1 (1999). Five of those are native.

The non-native species include regular onion, garlic, chive and wild garlic and their varieties (A. cepa, A. schoenoprasum, A. sativum and A. vienale, respectively). The most common, wild garlic grows as a volunteer in lawns and disturbed areas and in spite of its common name does not form a garlic-like head. Instead, it produces a large number of minute bulbs that separate easily, which is one of the reasons it is very resilient in lawns. In addition to prairie onion, narrow-leaf wild leeks, wild onion, nodding wild onion and broad-leaf wild leeks (A. burdickii, A. canadense, A. cernuun and A. tricoccum) are native. For more information on wild leeks, refer to the article published in February 2016 in this same column.

Prairie onion bulbs can be harvested any time of the year but they are at their best in the summer or early fall and the flowers from July through August. The seed is formed at the end of fall when it can be gathered.

According to the United States Department of Agriculture (USDA), prairie onion has a wide range of distribution in the central United States from Texas to Canada in Saskatchewan, Manitoba and Ontario. In Missouri, prairie onion grows in the Ozarks and in three counties north of the Missouri River, including St. Louis and Boone counties.

Billy Joe Tatum, in her "Wild Foods Cookbook and Field Guide," mentioned the use of prairie onion in her recipes, both fresh and cooked. I provided one recipe developed by Sue Bartelette where she uses prairie onions and dittany. I hope you'll give it a try!

Dr. Nadia Navarrete-Tindall, previously an associate professor for Lincoln University Cooperative Extension, is now a native plant specialist independent consultant. She can be reached at [email protected] or on Facebook: Native Plants Program. She offers educational workshops about native edible plants and other topics on native plants as well as consultation on native plants for your yard. For more recipes and details, see Randy's blog, Nadia's Backyard at nadiasyard.com.