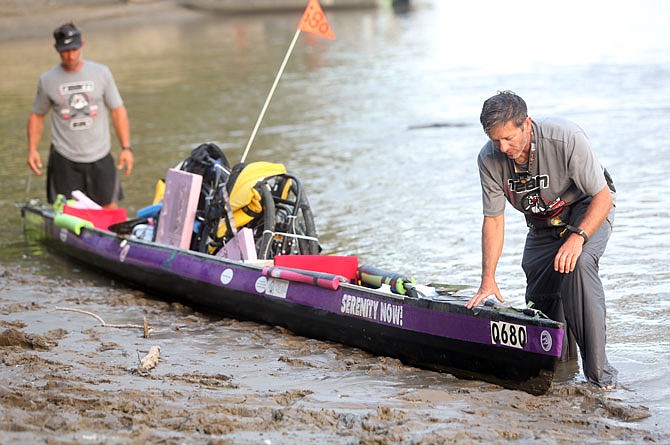 David Ganey, right, and Tod Wilson beach their canoe Wednesday during the MR 340 River Race at the Carl R. Noren River Access. Ganey and Wilson are Jefferson City natives, and this is their second time participating in the race.

Atypical August weather is helping the majority of racers in this year's MR 340 River Race.

That's according to organizer Scott Mansker, who said he was seeing a lot more smiling faces from his position in the rear of the race.

"For those in the back part of the race, they are way ahead of where those racers were last year," he said Wednesday. "They have energy, and fewer are dropping out."

Wednesday was the halfway point, and racers began coming into the Noren River Access in North Jefferson City for a quick pit-stop before heading out to finish the race. Participants are allowed 88 hours to complete the course. There are nine checkpoints along the route, where paddlers are required to sign in and out.

The first boat, a two-person kayak, checked in around 8:30 a.m. Wednesday, and the next kayak didn't arrive until about an hour later. Both boats stayed only about 60 seconds to get supplies and move on.

Fire officials monitoring the area said debris had caused morning racers to take the course at a slower pace. Race organizers estimated they were running about an hour slower than last year.

Between Monday morning and the time the race began Tuesday morning in Kansas City, the river went from about 8 feet to nearly 15 feet in Jefferson City, according to National Weather Service measurements. By Wednesday morning, the river had gone down to just over 12 feet and was expected to continue to recede to around 8 feet by today.

Higher river levels increase the current speed and can stir up more debris on the river.

"The fast paddlers we expected would catch the debris, but most of the racers will not see any," Mansker said. "I'll tell you those fast paddlers will say they would much rather deal with dodging logs instead of a 105-degree heat index."

Among the approximately 600 racers this year are people from 37 other states as well as Japan, Mexico, Canada and Great Britain.

Holts Summit resident Bill Overton has helped in various ways around the Noren River Access when the boaters come in. He said he can remember when they didn't have GPS to track racers, which now makes it simpler to keep things in order. He also pointed out each team has to have a support team, something they didn't have when the race first started.

"At the pre-race meeting, before the race begins on Tuesday in Kansas City, they can have as many as 2,000 people there," he said. "It's really a sight to see."

Overton, Mansker and others involved with the race said there was a big hole for them this year because it's the first time Joe Wilson has not been involved. Wilson, who died last year, was a friend to many involved in the race, keeping the area around the boat access - now known as "Joe Wilson's Serenity Point" - clear for them to get in and out of and working to get racers food and supplies.

"Everyone I've talked to who has been through is really impressed with how Jefferson City's Parks Department and Missouri American Water, which sponsors the race, have worked to keep the area looking nice," Mansker said. "Joe's passing left a big void for many of us, but a lot of people have told me they think the area is the best it's ever looked. It's a great tribute to the community."

Winners were expected to arrive late Wednesday evening to early this morning in St. Charles. Racers will continue to arrive throughout today and through Friday, with awards presented Friday night.