Team 680 to support mental serenity, local schools as they tow and float their own "Serenity Now" 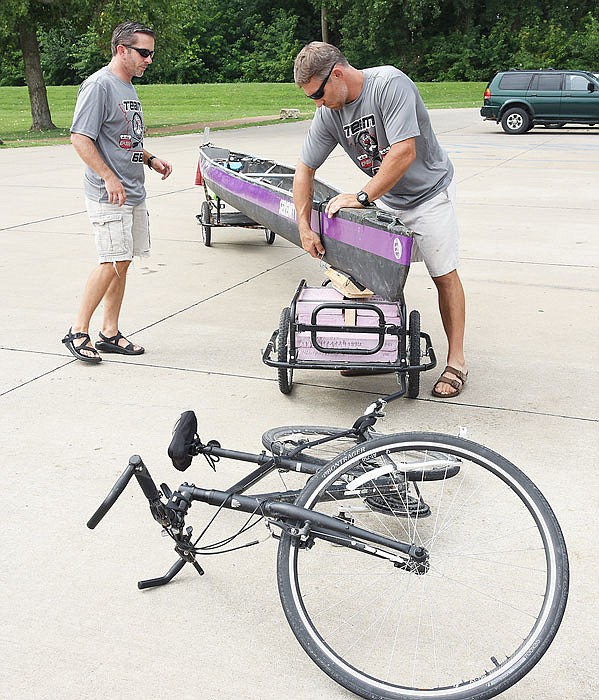 David Ganey, left, and Tod Wilson show how they will tow their 27-foot purple canoe to Kansas City for the annual MR340 Race on the Missouri River.

Going against the current of their other speed race experiences, this year's MR340 will be more about the journey than the ending for David Ganey and Tod Wilson.

Ganey and Wilson are leaving Friday to embark on their quest of biking from Jefferson City to Kansas City - with their canoe "Serenity Now" in tow - before they paddle down the Missouri River to St. Charles with their bikes aboard, and then bike back home. The total distance traveled by pedaling and paddling will be roughly 680 miles roundtrip - hence the two men's Team 680 name.

They are doing the journey to raise money for the Jefferson City Public Schools Foundation and the Yellow Ribbon Suicide Prevention Program.

"For me, this is more about what we can do for those two (organizations) rather than this crazy endeavor," Ganey said Monday morning as he and Wilson demonstrated how they will tow their canoe with their bicycles. Each man will take turns towing.

This year's paddle down the river will not be the first for either of the men. It will be Wilson's fourth, and he said after every other time he told himself, "I'm never doing that again."

In 2015, he, Ganey and Nate Redcay competed in the MR340 to demonstrate goal-setting and achievement for Jefferson City High School wrestlers and to raise money for the team. Ganey is an assistant wrestling coach at JCHS. Their three-man MR340 team that year set a 41-hour 10-minute mark for the second-fastest team division time in race history.

This year, the two of them can apply their physical and mental resolve at just a bit more of a relaxed pace. Put another way, Ganey said this year while in the race, the two of them won't have to only focus on the first 18 inches of the bow of the canoe and their paddling rhythm instead of the scenery around them.

Ganey previously told the News Tribune they think they'll complete the river portion of their journey in 65 hours. But that doesn't mean traveling the 680 miles over trails, roads, the river and back again will exactly be easy.

"You can prepare your body for the rigors of the race and river," Ganey said, but both agreed keeping the mental strength to push on is the greater challenge.

"These two groups go the extra mile," Ganey said of the two organizations they're dedicating themselves to in their fundraising efforts this time.

Wilson said he knows people who've been affected by suicide, and the majority of people who've sought Team 680 out to support them have done so for the cause of suicide prevention.

Ganey was surprised that became the driving force, but it's "a testament to the work that group has been doing," he said of Yellow Ribbon, which provides community training, education and assistance events to address a shortage of trained mental health professionals and responders.

According to the Kaiser Foundation, federal regulations stipulate a shortage of mental health professionals occurs if there is a population of 30,000 or more people for every one psychiatrist, or 20,000 to one in high-need communities.

In the United States as whole, the Kaiser Foundation reported about 106.4 million people don't have adequate access to a psychiatrist.

All donations that Team 680 receives will be split evenly between Yellow Ribbon and the JCPS Foundation, which supports teachers and students in the district through grants and gifts. People can continue to donate to the team's Go Fund Me account, at gofundme.com/team680, and Ganey said the account would remain open for a while yet.

Sponsors of the team so far have included Ecco Lounge, Scheppers International Truck Center, Woodland Animal Hospital, Whaley's Pharmacy, Scruggs Lumber, All Seasons Landscaping, Custom Screen Printing and Embroidery and Cross Fit Unstoppable, among others. Ganey said he would like see as much grassroots support as possible.

Wilson and Ganey hope to cross the U.S. 63/54 bridge over the Missouri River, headed toward the Katy Trail at 6 a.m. Friday; their canoe's too long for them to use the pedestrian access ramp off the bridge, so they'll have to take the airport exit.

Ganey added too "my wife and my family have been super-supportive" in pushing him to train, and he's "hoping to go on this adventure with them in the future," whether that's a race or not.