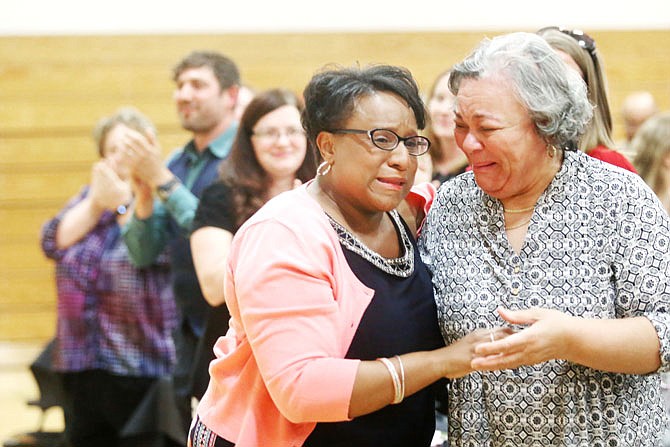 Rhonda Allen, left, reacts to being named 2017 Teacher of the Year as her mother, Saundra Allen, right, celebrates with her Thursday during the annual Jefferson City Public School banquet at Lewis and Clark Middle School.

Allen is a fourth-grade teacher at Thorpe Gordon Elementary School.

"I was really surprised," she said of receiving the latest Eisinger Teacher of the Year award. She said she would give some of her $1,000 prize money back to her school.

She said in an introductory video her classroom is not a traditional one; she likes to incorporate music.

She also said while learning is obviously important for students, "what's more important is that we care about them and show them good examples of what it is to be a citizen."

In addition to Allen and McKee, the other four finalists for the awards were:

The Teacher of the Year Selection Committee is comprised of Jefferson City area community members. They chose finalists based on written applications submitted in February. The committee then interviewed the six finalists in person at their classrooms in the process of determining the winner.

The awards are named after former JCPS teacher and Missouri Teacher of the Year award winner Linda Eisinger. She and her husband, Don, announced last year they would fund the awards for the next 15 years.

Anyone can nominate a teacher for the awards, which drew 142 nominees this year.

The award winners and finalists were not the only ones recognized Thursday night. Teachers who have served five, 10, 15, 20 or 25 years were recognized, as well.

In all, 45 district staff members have served for 15 years or more, with nine of them serving for 25 years.

Director of Food Services Terri Ferguson, a 33-year JCPS veteran, was one of the 29 district employees recognized for their retirements this year and for the years they've served Jefferson City Public Schools.

Lewis and Clark teacher Eileen Bisges and JCHS English teacher Debbie Schmidt were not far behind with 38 years to both of them.

After them, the experience of the other retiring staff recognized Thursday night ranged from 20-33 years.