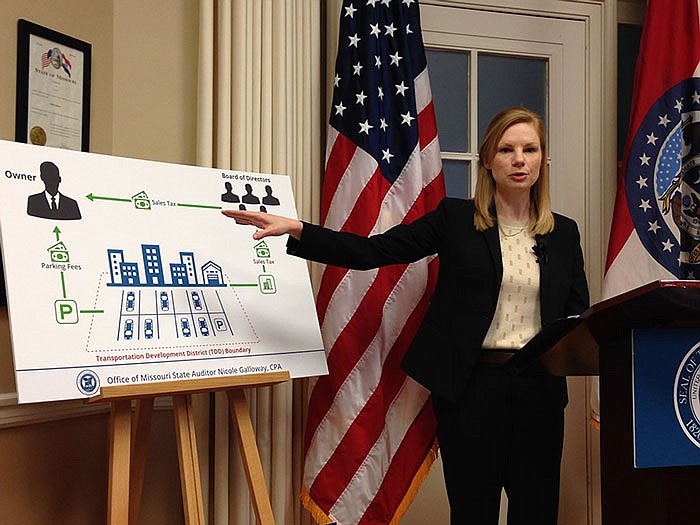 Jefferson City's Stone Ridge Transportation Development District (TDD) accepted a nearly $2 million construction contract from a company that didn't meet all the bid requirements - but was owned by one of the TDD's board members, State Auditor Nicole Galloway reported Monday.

That contractor, which was not named in the report, submitted its bid after the established deadline "and did not seem to address all bid specifications," Galloway noted as part of an audit of 12 Missouri TDDs.

The Stone Ridge TDD included improvements to Missouri Boulevard and South Ten Mile Drive, as well as construction of Stoneridge Parkway, for a cost of $3.106 million. The TDD, established in January 2007, is expected to last through 2027, according to the state auditor's office. It encompasses the retail stores within the shopping center off Missouri Boulevard, including Kohl's, Menards and Sam's Club.

The auditor's report notes state law requires all TDD construction contracts over $5,000 to be bid competitively and awarded to the lowest and best bidder - but the law does not require anyone independent of the property owner/developer to review the selection of the contractor or contract terms.

That allows the TDD "to award construction or materials contracts to related party contractors as, the auditor said, happened with the Stone Ridge project, where the only other bidder submitted its proposed contract before the deadline and addressed the bid specifications."

A TDD is an independent political subdivision organized to levy taxes or assessments to pay for construction of roads, parking facilities or other transportation-related improvements within the district. A TDD may be created by filing a petition in the circuit court of any county partially or totally within the proposed district. Once the

political subdivision approves the petition, the district can set the tax rate to be applied. TDDs are governed by a board of directors with five to 15 members.

The auditor's report covered calendar years 2014 and 2015, sending questionnaires to all 205 TDDs in Missouri then doing more in-depth checks of the 12 districts.

"These districts were not selected due to any known issues or concerns, and are considered representative of the larger population of TDDs throughout the state," the report explains.

The audit points out that the law allowing TDDs has significant weaknesses.

"The current law allows for the formation of a TDD and approval of the related sales tax without voter approval or adequate public scrutiny," the audit reports. "In addition, the current law does not include appropriate safeguards to ensure projects benefit the public."

As with the Stone Ridge example, the audit found: "The law also allows for significant conflicts of interest within the governance structure of the districts, giving significant oversight responsibilities to property owners and developers, which results in a lack of oversight and accountability to the public.

"As a result, there is no assurance projects were properly procured, project costs are reasonable, and public monies are used for allowable purposes."

And the TDD law "allows for projects with undefined costs, resulting in districts that are allowed to continue in perpetuity, without adequate oversight," the auditor said.

"The law does not promote timely abolishment of TDD taxes when district obligations have been met, resulting in excess taxation of the public."

"In addition, there is a lack of transparency in the reporting of TDD sales tax distributions," Galloway said in a Monday news conference. "The way these are operated, developers can award themselves contracts and sales taxes are put in place without a vote of the people. These are all allowed under the TDD law. They are set up against the taxpayer."

Galloway said she realizes it is too late this legislative session for lawmakers to address this matter, but is hopeful it can be considered next year.