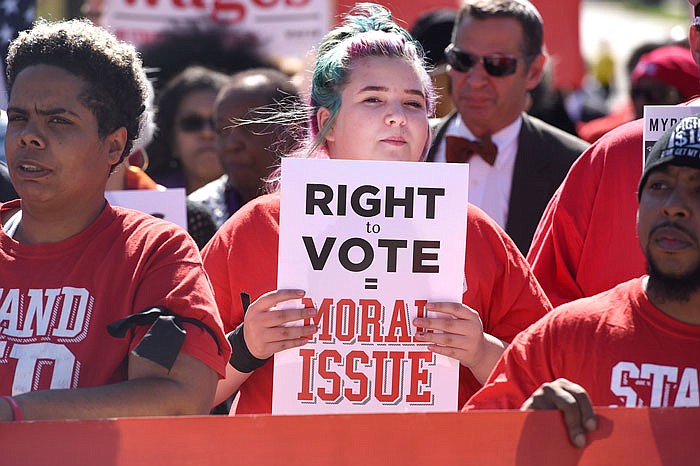 Madison Baker, 13, holds a sign during a minimum wage rally on Capitol Avenue on Monday. Baker is marching with Stand Up KC because her parents work in fast food and can't afford to pay their medical bills.

Editor's note: The town where speaker Anna Holman resides has been corrected in this story.

Hundreds of faith leaders, workers and community leaders protested Monday in Jefferson City calling on politicians to support what they called "a moral policy agenda" that includes opposing Amendment 6 on the November ballot, supporting a $15 per hour minimum wage, and passing Medicaid expansion.

Protesters read and delivered to Gov. Jay Nixon's office a "moral declaration" signed by more than 10,000 people of faith and 2,500 faith leaders calling on elected officials and candidates to embrace "morally just policies." They also called on communities to go to the polls and vote for candidates who have "the highest capacity to advance a moral public policy agenda."

"There was a recent study done by MIT that a living wage is actually $21 an hour," said the Rev. Rodney Williams of Kansas City, president of the Faith Voices group. "$15 is the minimum for a decent wage."

Going from First Baptist Church to the Capitol Rotunda, the protest was one of 25 held in state capitols across the country as part of a "Higher Ground Moral Day of Action" spearheaded by the Rev. Dr. William J. Barber II, an architect of the Moral Mondays movement in North Carolina and founder of the social justice group Repairers of the Breach.

Protesters also held a moment of silence for Myrna De Los Santos, a Kansas City McDonald's worker and Fight for $15 leader who died last week after falling ill. Protest organizers said De Los Santos was like many low-wage workers who can not access the care they need. They said she lacked health insurance and could not afford a doctor.

"The fact that we can't pay low-wage workers enough to afford health care is repugnant," said Missouri NAACP President Rod Chapel. "We pay people for 40 hours work and make them do 60-70."

Protesters also called for the defeat of Amendment 6, the November ballot measure to change the state's constitution regarding voting.

According to Secretary of State Jason Kinder, the ballot measure will ask the following question: "Shall the Constitution of Missouri be amended to state that voters may be required by law, which may be subject to exception, to verify one's identity, citizenship, and residence by presenting identification that may include valid government-issued photo identification?"

"The only way you can make a difference is to vote," said Rev. Cassandra Gould, pastor of Jefferson City's Quinn Chapel A.M.E Church. "My mother was arrested working to get the right to vote, and I don't want to see that taken away."

Among those speakers at the Capitol was Anna Holman. The 86-year-old Jefferson City resident urged the crowd to defeat Amendment 6 because, she said, "Too much blood has been shed to get the rights we have."

"To me this looks like they are going back to Jim Crow laws," Holman told the crowd.

Many of those in Monday's march have been involved in efforts to raise the minimum wage and expand Medicaid. That included 22 pastors and religious leaders being arrested and eventually convicted of trespassing in the state Senate's Upper Gallery, after they didn't leave immediately when told to do so by Capitol Police in May 2014.

There were a number of Capitol Police, Jefferson City police and Missouri Highway Patrol officers around the areas where the group went Monday, but the only complaint received were about marchers blocking traffic as they went back and forth from the Capitol, but authorities said that was easily resolved.