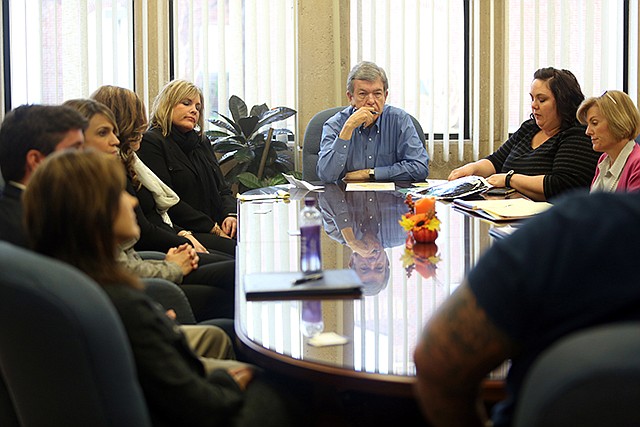 Sen. Roy Blunt, R-Missouri, center, speaks Friday to activists and lawyers about drug laws and concerns at the Missouri Chamber of Commerce.

During a roundtable discussion Friday, drug recovery and rehabilitation advocates urged Sen. Roy Blunt not to support the legalization of medical marijuana.

"Medical marijuana is just a sham," said Susan Ryan, an advocate from St. Louis. "We don't need to give more opportunities for people to get high."

"Under the Supremacy Clause, you can't put something on the ballot that is illegal at the federal level," added Chris Limbaugh, prosecuting attorney for Cape Girardeau.

Addison Daniel, a recovering drug addict from Jasper County, shared her story with the group.

"This is my ninth attempt at sobriety," Daniel said. "I've been clean for eight months, and I've been to every treatment facility you can think of."

Daniel said her addiction started when she was 18 years old when she was in a car wreck and was prescribed opioids to cure her daily pain. Currently, she is enrolled at Primrose Hill Teen Challenge Center, a 12-month drug treatment center in Clark that works with women and children.

"When the pain medicine wasn't enough, I went to heroin," Daniel said. "Marijuana wasn't my issue, but it can become one."

"When she got arrested in January, I immediately called the prosecutor in the county she was arrested in and asked them to put a cash bond on her," Patterson said. "And this is what saved her life."

Ryan, the advocate from St. Louis, said, "Addison could have been my daughter," referring to the fact no one thinks it could impact their family. "I feel passionately about this, which is why we need this prescription monitoring program."

Patterson said this journey with her daughter has motivated her to increase awareness about drug abuse of all kinds.

Patterson recalled someone telling her they knew a lot of people who had become drug addicts but didn't know one drug addict who hadn't smoked marijuana. She said this was one statement she would never forget.

During the discussion, Blunt said he'd worked with Congress to set up the ability for counties in Missouri to set up an opioid registry under the Comprehensive Addiction and Recovery Act (CARA). CARA was passed by Congress in July to work on issues like prevention, treatment, recovery, law enforcement, criminal justice reform and overdose reversal.

"When you're in the midst of debate, knowing that you can say with some certainty people who deal with this all the time have told me this, is very helpful," said Blunt. "We just have to keep talking."