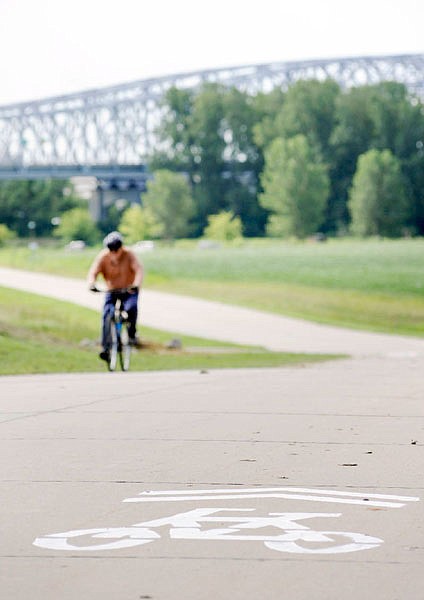 This Aug. 19, 2011 file photo shows a road surface marking which points riders coming from the Katy Trail toward the pedestrian/bike lane crossing the Missouri River in north Jefferson City.

In the blunt but friendly words of Brent Hugh, the director of the Missouri Bicycle Federation, "it's about time" the Capital Area Metropolitan Planning Organization (CAMPO) pedestrian and bicycle plan has evolved from the discussion to doing.

Hugh, who hails from Kansas City, set the scene for CAMPO's all-about-bikes open house from 3-6 p.m. Thursday at City Hall.

"We're ready to get this project off the planning stages, too," said Alex Rotenberry, CAMPO transportation planner. "It may seem like this has been moving at a snail's pace to some and that we've been sitting down here in our ivory tower not doing much, but we wanted to give the public one final chance for an open house, to come in and let us know how they feel about it."

The "it" is a comprehensive, citywide, regionwide plan to network the Capitol, downtown Jefferson City neighborhoods, the Katy Trail, the river and existing trails, bike ways and sidewalks "that makes as much sense for Jeff City as it does for Holts Summit and for Cole County as it does for Callaway County," Rotenberry said.

After the open house Thursday, the plan will be presented to CAMPO's board of directors, and if it passes muster there, it will proceed to the City Council.

It's been a couple of years since Smith moved his shop from West Edgewood to the bottoms to get closer to the Missouri River and the Katy Trail. The move has paid off. Just last Friday, he serviced groups of bikers from Virginia, West Virginia, Pennsylvania, Colorado and a fifth state he couldn't remember. "I was too busy,' he apologized.

"Jeff City definitely has a name as a bike town now," he added.

Neitzert heads the statewide organization of municipal parks and recreation departments and is the de facto spokeswoman and cheerleader for the expansion of biking in Missouri.

In addition to all of the usual reasons for biking- reducing pollution, healthier lifestyles and wellness, Neitzert said, "The community connection biking provides, the community unity it fosters, you just cannot understate the value it represents to all of us. Biking is not just the feature du jour in the recreation world." She added Missouri was recently named the best trails state in the nation and the Katy Trail was cited as the best trail in the U.S. She noted recent data indicate trails are the No. 1 most sought-after municipal recreation feature, displacing community centers and indoor swimming pools.

Rotenberry noted the bike plan has a huge fan in City Engineer David Bange, an avid cyclist. Bange is among the first cyclists in the area who is using the STARVA fitness-tracking, social-networking platform. Along with NASCAR's Jimmie Johnson and Twitter CEO's Dick Costolo, Bange knows the average commute by bike is 11.7 miles and Tuesday is the most popular day for bike commuting worldwide.