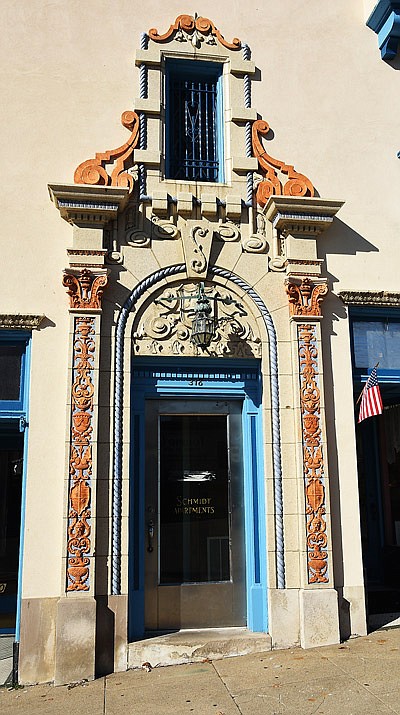 The Schmidt Apartment Building's vivid color scheme of the exterior plus the designs in the tiles, seen above, make it one of the most unique buildings in Jefferson City.

The most modern building in the city at the time, the Schmidt Apartments were praised in a four-page spread of stories and photos in the Nov. 16, 1929, Jefferson City Post-Tribune. 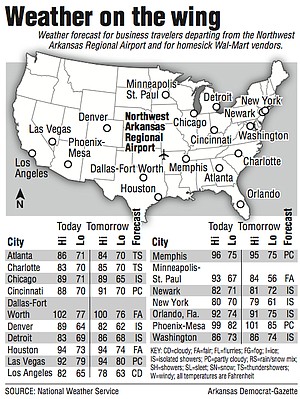 Its location has always been at the center of city activity.

"Located a half block off High Street on one of the most important north and south thoroughfares in the city, the building has an auspicious site," the Post-Tribune reported. "It is but half a block from the Central Bus station and from the point where two important state highways meet."

The five-business, six-apartment property replaced a 50-year-old wagon-maker's shop. Paul Schmidt, who completed the project, was the grandson of the wagonmaker of the same name.

Wagon-maker Johann Paulus "Paul" Schmidt was born in 1835 in Bavaria and arrived in the United States about 1840. While living in Hamilton, Ohio, where he learned the wagon-making trade, he married Bavarian immigrant Barbara Meyer. The couple followed her family to Jefferson City by 1857.

Schmidt's business start in Jefferson City was at the Fischer-Schmidt Wagon Company on Madison Street. By 1870, he had opened his own business at the Jefferson Street location.

In his 1920 obituary, Schmidt is called "the oldest business man in Jefferson City," citing his wagon shop that had been operating for 63 years, and "wagons from his shop may be found all over Central Missouri."

Paul and Barbara Schmidt, both buried in Riverview Cemetery, had nine children, only three living to adulthood. Sons William C. and John learned the wagon-making trade and worked with their father.

William's son Paul bought his grandfather's lot, including the old family home and workshop March 17, 1928, on the courthouse steps.

The younger Schmidt opened a Bosch Radio Agency below and lived with his parents in an apartment above in his new venture.

The architects were Kennerly and Stegemeyer, of St. Louis; the local contractor was Ed Kuehn. Materials were supplied by Scruggs-Guhleman Lumber Co.

"The building complete is one of the most outstanding in central Missouri from a standpoint of architectural beauty," the Post-Tribune said.

The original exterior was pale yellow stucco with large display windows set in polished Verdi antique marble on the main level, and the upper balcony windows were accented with small, diamond-like panes.

But it was the innovative interior that was "amazing" for its time, "built for comfort as well as beauty," the newspaper said.

"Convenience deluxe has been the keynote numerous details found only in the large apartment houses of the great cities," the Post-Tribune said.

Each of the apartments had a Murphy bed in the living room, decorated in green and ivory enamel.

Murphy beds, "long-ago passed the experimental stage," were convenient enough for a child to operate and allowed a room to "do double duty," the newspaper said.

The largest apartment's bed chamber boasted hand-tinted walls with "handsome sprays of roses painted in oils by the artist doing the decorating," the newspaper reported.

"Ample closets" benefited from a Garcy Hercules rack, which maximized the use of vertical space.

The walls were finished in a "rough Craftex effect," using an antique brown. The bathrooms, of "generous proportion," were covered in white Vitrolite.

"Housekeepers will find these cabinets ideally suited to the needs of their apartments," the newspaper said.

"An upper cupboard for dishes and plenty of drawer space for silver with large lower divided sections for utensils, bread and dishes are part of its features.

"Each apartment has an adequate number of light sockets - a convenience which is often much to be desired," the Post-Tribune wrote.

Stokes Electric did that work, as well as "radio insulation."

Each of the business spaces "all have been wired for radio reception, making an excellent location for radio sales headquarters."

The apartments had a dedicated wall plug for the radio, a "characteristic alone of the apartments is one found only in fine modern buildings."

The building today retains a majority of its original features.