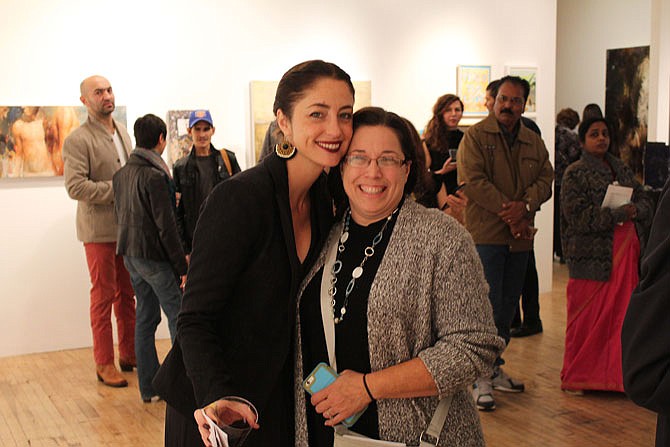 HALO founder Rebecca Welsh poses with HALO board of directors member Suzanne Alewine at the "Bloom" exhibit in the Slag Gallery in Brooklyn.

A group of well-known artists combined with celebrity supporters to help HALO, a nonprofit organization with Jefferson City roots.

The organization helps homeless, at-risk and low-income youth around the world and in Jefferson City, where HALO operates a learning center and a transitional living program (TLP).

Most recently, Irina Protopopescu, owner of the Slag Gallery in New York, collaborated with 31 internationally known artists to create art inspired by the stories of the youth supported by HALO. Their works were displayed in an exhibition called "Bloom" at the gallery in Brooklyn for several days and are currently being auctioned off via a mobile or internet bidding site, which began Nov. 4 and continues through 4 p.m. Friday.

"Anyone anywhere can bid on the artwork pieces, and the winning bidder of each piece will also receive our HALO child's original artwork along with their story," said Rebecca Welsh, HALO founder and executive director, who attended the exhibit at Slag Gallery.

So far, the bidding has reached $14,000, and all the money raised will support the 1,200 HALO homeless youth and orphans around the world. The HALO Foundation works internationally to empower youth and domestically supports programming for at-risk youth. The local HALO Learning Center, launched in 2012 in a partnership with Jefferson City High School, the foster care system and alternative schools, provides art therapy and programs for at-risk and low-income youth. HALO Jefferson City also runs a TLP for the homeless and at-risk youth in Jefferson City and the surrounding community.

Actors Salma Hayek and Bryce Dallas Howard were actively tweeting about the Bloom auction and some of the renowned artists, like Romanian artist Alex Done whose painting, "A Guardian Angel for Shae," is up for auction. Shae is a homeless youth in Missouri whose self-portrait painted at the HALO center in Kansas City has made a quite a stir.

The Mexico-born actress, Hayek, is involved in several organizations that support important change for women, such as the Kering Foundation, which combats violence against women, and she recently announced in a story on People.com she's helping sponsor a small HALO orphanage in the country.

In the article, Hayek was quoted as saying, "these children are sexual-violence victims, and the majority are orphans from the drug wars in Mexico. It's a very small operation, and this is what I love about it. Right now they only have 45 (children). When it's a small operation like that, you can really care for them, but they would like to expand."

"Salma and I stayed in contact after that event, and I'm so excited she has continued to support our mission. More than anything else, she wants people to get behind it and give," Welsh said.

The catalog artwork up for auction can be found on this website and at HALO's Facebook page.