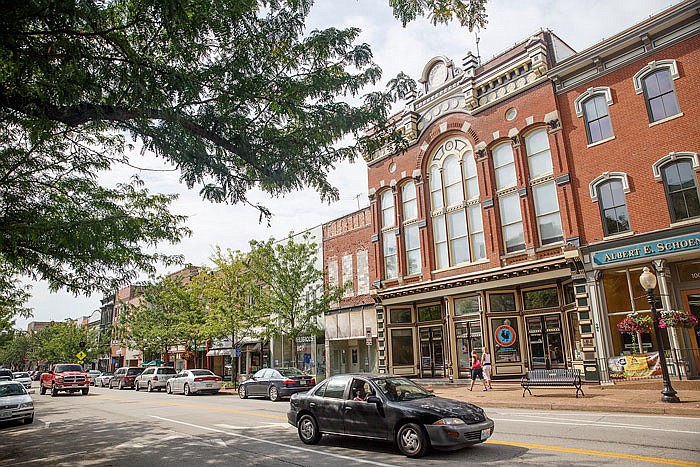 And apparently the promise the owners of Shop Girl, Mad as a Hatter Uniques and Wheelhouse Pizza & Pub see in the local business landscape is no coincidence.

Local, independent entrepreneurs aren't the only ones who see a future in Jefferson City.

National retail chain Party City has announced plans to open a store at Capital Mall, construction began in June on Jefferson City's first IHOP restaurant and a Pita Pit franchise is set to open next to the Edge Express Phillips 66 store under construction on West Edgewood Drive, to name a few developments.

A handful of other franchised companies could follow suit soon.

K-9 Resorts Daycare & Luxury Hotel, a high-end dog-boarding and pet-care business based in New Jersey, is targeting the Mid-Missouri area for growth after six years of success in the Northeast.

"It's definitely an area of interest, something that we are seriously considering, and it's really about finding the right franchise partner," said Jason Parker, K-9 Resorts Daycare & Luxury Hotel co-founder and co-CEO. "We are going to get close to (Jefferson) City because of the demographics."

K-9 Resorts has embedded itself in markets that fall within certain metrics for population, household income and "pet index," which measures what residents are willing to spend on their pets. Jefferson City fits their bill, Parker said.

The company wouldn't select a location until a local franchisee was on board, but Parker said he considers Jefferson City their starting point.

They hope to find the right person to take the franchise's helm within six months.

K-9 Resorts is also looking at expansion in Texas, Arizona and California.

Jefferson City ranked only 554th for its business environment in the WalletHub study - but it shined in business costs, ranking third among the 1,268 cities considered. It ranked 96th in access to resources.

Jefferson City has exactly the resource Gerry Weber, CEO of Fast-Fix Jewelry and Watch Repairs, is looking for - Capital Mall.

"Capital Mall would be a place that we would want to be," Weber said of the national retail chain, based in Florida, that typically locates its stores in malls.

The full-service jewelry and watch repair shop's 150-plus stores are mostly located along the east and west coasts, but the company is looking to expand into the Midwest.

"We think that Missouri is going to be great for us," Weber said, noting Fast-Fix is targeting cities as big as Kansas City and as small as Jefferson City.

"Our stores are not all in thriving megalopolises; we are in a lot of smaller cities," he said. "Will the store in L.A. be busier than the store in Jefferson City? Yeah, probably. But Jefferson City will do very good business because we will take care of the customers. The service that we offer, it cuts across all demographics."

Fast-Fix is actively seeking a local franchisee, as well as franchisees in Kansas City and Springfield, and Weber said he hopes to have a store open in Jefferson City "as soon as possible."